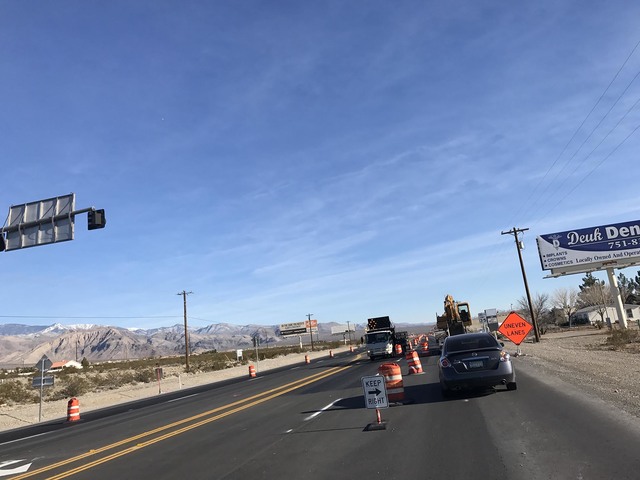 Widening work on a 1.75-mile-long portion of Highway 160 in town is set to halt until the warm weather in spring, according to the Nevada Department of Transportation. Mick Akers/Pahrump Valley Times

Widening work on a 1.75-mile-long portion of Highway 160 in town is set to halt until the spring.

Last week work crews sealed grinding areas of the road, which diverted traffic to alternating lanes to finish various sections of the road.

The widening project stretches from Rainbow Avenue to Calvada Boulevard, according to the Nevada Department of Transportation.

Road crews began striping the stretch of highway Tuesday and will remove the barrels in the next few days once the striping is complete.

The $3.5-million road project was slated for completion in November and then pushed back to December due to various delays, including weather and stormwater pipe issues.

The new completion date has now pushed back to the spring.

Despite the delay, there will be four travel lanes, two in each direction, open through the spring, until work crews can put on the final touches, which involves open grading in April or May, when the weather heats up.

All cones and barrels will be removed this week and minor work on the shoulder is left, which involves spreading landscape mulch, then work will be halted until April or May.

The project requires 23,000 tons of asphalt or enough blacktop to pave 3,600 driveways, according to NDOT.