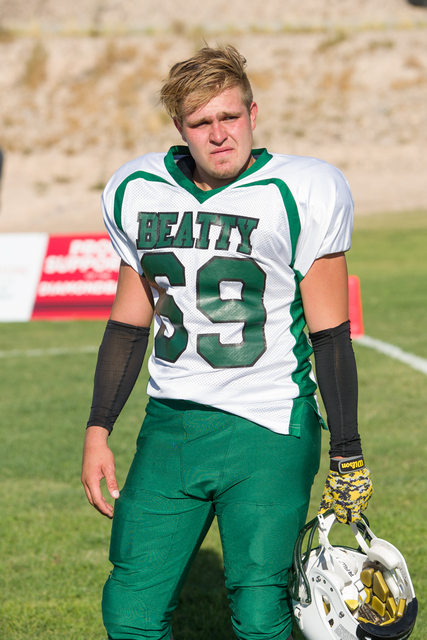 Skylar Stephens / special to the Pahrump Valley Times Robby Revert was one of the big lineman on the Hornets football team. He played on the offensive line and as a linebacker on defense. He graduates this year and will be missed by his coach. 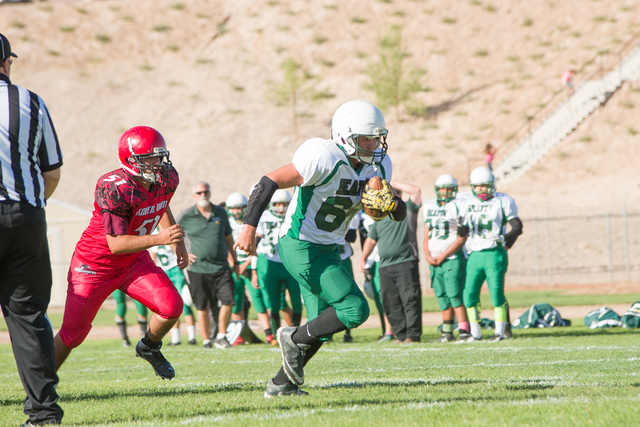 Skylar Stephens / special to the Pahrump Valley Times Robby Revert runs the ball in a rare moment against Beaver Dam. 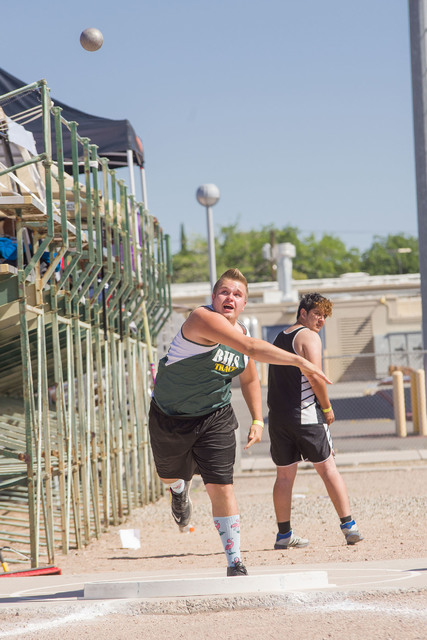 Skylar Stephens / special to the Pahrump Valley Times Robby Revert throwing the shot last year. Robby threw 4 feet further than he had ever thrown to win with a throw of 37-02.50. In his last year, he should be even better. 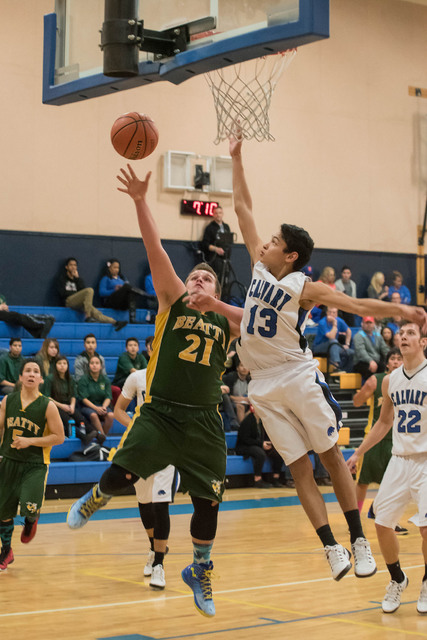 Skylar Stephens / special to the Pahrump Valley Times Robby Revert beats his defender for a layup. He is starting as a forward this year in his last season.

For Robby Revert, growing up in a small town his whole life has meant that he has had an extended family.

“Growing up in a small town everyone in the community is part of a big family,” he said.

This extended family supported him when his grandfather, who he is named after, passed away last month with over 400 people expressing their well wishes. This family also saw him grow up on the court and the field as they watched him play three sports at the high school.

Revert played football in the fall as a lineman, is a forward for the basketball team and a thrower for the track team. He also played on the baseball team.

Being a senior at Beatty High School, he will soon be leaving this family.

He may not have been the best athlete out there, but he came out for three sports and was a team leader. His football coach, Leo Verzilli, had nothing but praise for him.

“Robby is not a pure, gifted athlete,” Verzilli said. “What he is, is a hardworking athlete, that’s willing to listen and to learn. Whatever sport or event he chooses to do he will ask questions, listen and work at getting better. He is a learner, a thinker and a doer. He will take on a leadership role if it is asked of him and does not take this responsibility lightly.”

And Verzilli said he also worked just as hard in the classroom.

“Grades never come into question with him because he is just as willing to work hard in the classroom,” the coach said.

“He is also willing to help younger or less experienced players get better,” he said. “He will show up every day ready to put in the time and effort to get better as an individual and as a team.”

“Robby is a great leader on and off the court,” Sullivan said. “He is a student-athlete who demonstrates a hard-work ethic and a love for what he does and any coach will tell you they love coaching him.”

The hardworking athlete said he learned a lot playing sports for the Hornets.

“I learned to trust and rely on my teammates,” Revert said. “And playing sports taught me to be a leader. I also gained a lot of confidence in myself.”

He said playing for a small school has its benefits.

“I have memories for life,” he said. “I think we have a lot of camaraderie that the bigger schools don’t have and it was a blessing to be a part of it.”

For Revert it was hard to choose which sport he loved the most.

“In football, I love hitting people,” he said laughing. “It’s a great stress reliever but I also love basketball. I play basketball all summer long and I liked the fact that I get to dominate other players.”

And then he went back to football.

“But I have to say that I have grown the most in football,” Revert said. “It is in this sport that I really showed I can lead.”

Revert said it will be hard to leave the small town he grew up in. “I want to experience the world and live somewhere else,” he said. “I am hoping to study criminal justice at the College of Southern Nevada and someday become a police officer.”

Verzilli said he will be missed.

“He is as honest and respectful a young man as you will ever meet,” he said. “I have loved teaching and coaching him and will hate to see him go.”