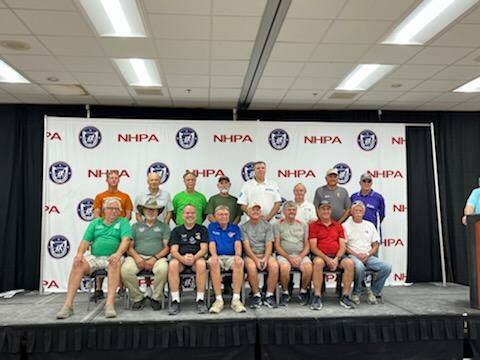 Special to the Pahrump Valley Times Pahrump resident and NSHPA president Lathan Dilger (back row, fourth from right) participated in the seniors division of the World Horseshoe Pitching Championships in Monroe, Louisiana. Dilger finished in 13th place in his group with a record of 5-10. 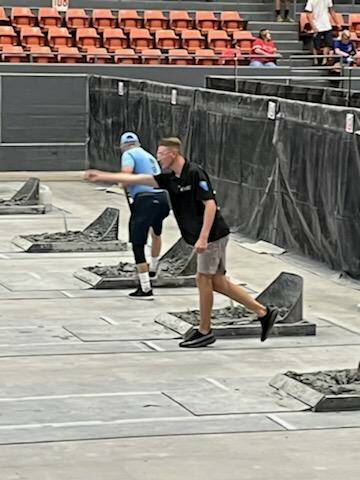 Special to the Pahrump Valley Times Pahrump resident Kasey Dilger participated in the men's division of the World Horseshoe Pitching Championships. He finished in 14th place in his group with a record of 5-10. 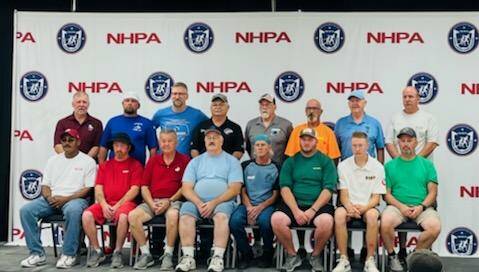 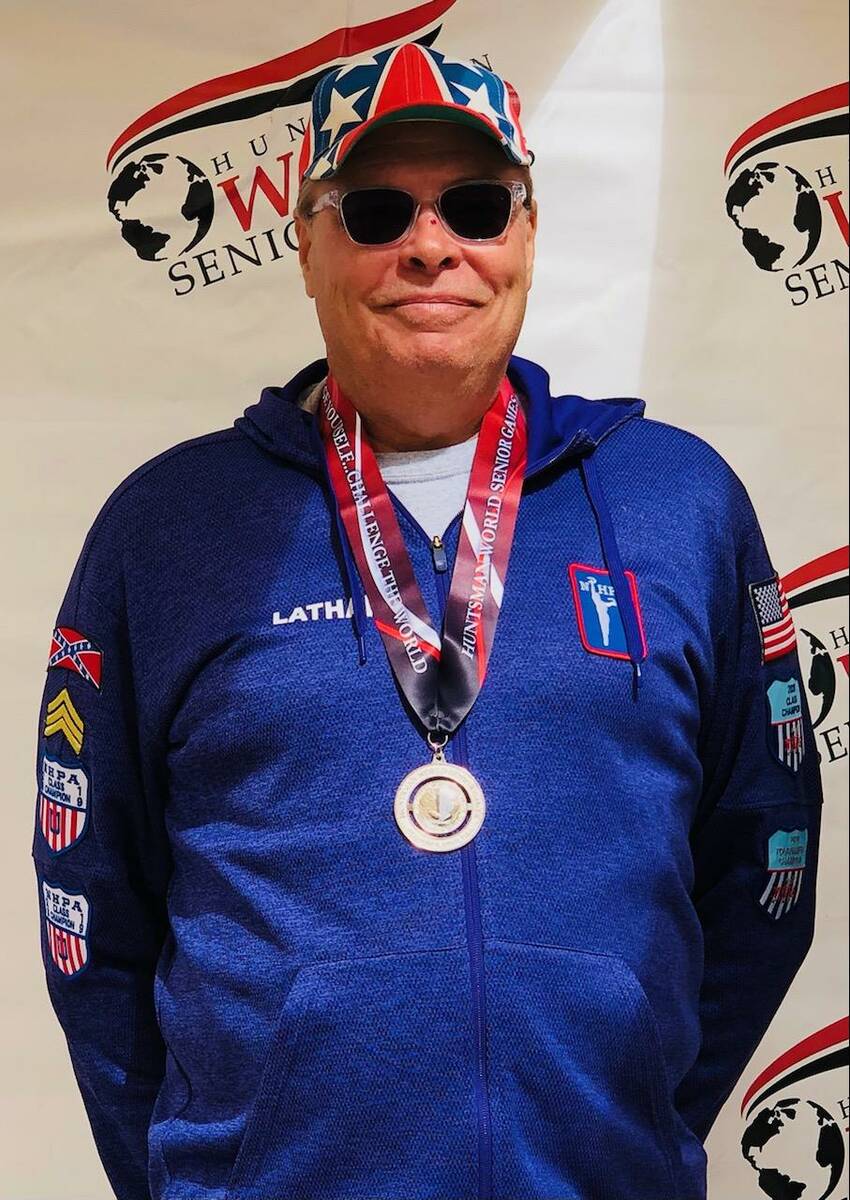 Special to the Pahrump Valley Times Pahrump resident and NSHPA president Lathan Dilger, pictured here at the 2021 Huntsman World Senior Games, participated in the seniors division of the World Horseshoe Pitching Championships in Monroe, Louisiana. Dilger finished in 13th place in his group with a record of 5-10.

Monroe, Louisiana has been the site for the 2022 World Horseshoe Pitching Championships since July 11. More than 600 pitchers from around the country traveled to participate in the tournament.

Kenton Jr. won the 2021 state championship tournament last October when it was held at the Joe Friel Sports Complex in Tonopah.

Lathan and Kasey Dilger were the only representatives from Pahrump.

The tournament was split into six categories – Cadets, Juniors, Womens, Mens, Seniors and Elders. Within these categories, the pitchers were split into groups based on their ringer percentage.

Kenton Jr. participated in the second highest group of the tournament. He was placed into the men’s A2 group. He entered the tournament with a ringer percentage of 59.38, best in his group.

During the tournament, Kenton Jr. played each of the other 15 pitchers in his group in a round-robin format. He finished with an overall record of 11-4, good for a tie for third place in his group.

However, due to a pitcher’s ringer percentage during the tournament being the tiebreaker, Kenton Jr. received fourth place in the A2 division.

The top 16 pitchers with the highest ringer percentage moved on to the championship stage. Unfortunately, Kenton Jr. missed the cut by just 2.84%, or 17 ringers. He would finish in 20th place, highest of any Nevada participant at the event.

Kasey Dilger also participated in the men’s division. He was placed in the C2 group.

His highest score and largest margin of victory came in the second game of the day when he matched up against Chuck Duymich of Florida.

Dilger won the matchup by a score of 40-14. He threw 20 of his 40 attempts for ringers. Duymich went on to finish in second place in the group with an 11-4 record.

The final Nevadan to participate in the men’s division was Mark Morfin.

Morfin entered the tournament with a 24.41 ringer percentage and was placed into the E1 group.

He finished the tournament with a 7-8 record, giving him an 11th-place finish in the group.

Morfin finished with 312 total points and threw 107 ringers, ending with a 17.83 ringer percentage.

Morfin’s largest win of the day came against Bob Hembrock of Missouri, by a score of 34-11, however, Morfin threw his highest single-game ringer amount of 13 during his matchup with Jesse Gentry.

NSHPA president and Pahrump resident Lathan Dilger was the only Nevadan to compete in the seniors division. He entered the contest with a 25.33 ringer percentage and was placed into the C group.

Lathan Dilger finished the tournament with a 5-10 record, ending the event with 344 total points and he threw 163 ringers.

Dilger ended his day with his largest margin of victory during the tournament. He won 32-8 over Bill Hurley of Indiana.

His highest single-game ringer percentage came against Ken Corrigan when he threw 14 of his 40 attempts for ringers, good for 35%.

Dilger would finish the competition in 13th place in his group.

Holbrook finished the tournament with a 5.5-9.5 record. His tie came against Frank Harris of Georgia. Holbrook and Harris finished in 13th and 14th places respectively.

Holbrook’s biggest win of the tournament came by a score of 45-23 over David Hampton from Ohio.

In his 15 games, Holbrook finished the event with 393 total points and threw 199 ringers.

Auchoberry didn’t have much success during the tournament. He finished with an overall record of 2-13.

His wins in the event came against Kermit Greer of Maryland and William Carll of Pennsylvania.

Auchoberry scored 271 total points and threw 111 ringers during the event. He would finish in 16th place in his Elder F2 group.

With the world championship tournament over for the Nevada pitchers, they set their eyes back on events within the state of Nevada.

The Southern Nevada Horseshoe Pitching Series will be holding their next tournament on Saturday, Aug 6. The Goldfield Days doubles event will be held at Goldfield Park, beginning at 10 a.m. All pitchers wishing to participate should arrive at least 30 minutes prior to the start time so they can get registered.

The NSHPA will be holding their next tournament on Saturday, Aug 13. The Sin City Nights event will be held at Leavitt Park in Las Vegas, beginning at 6 p.m. All pitchers wishing to participate should arrive at least 30 minutes prior to the start time so they can get registered.