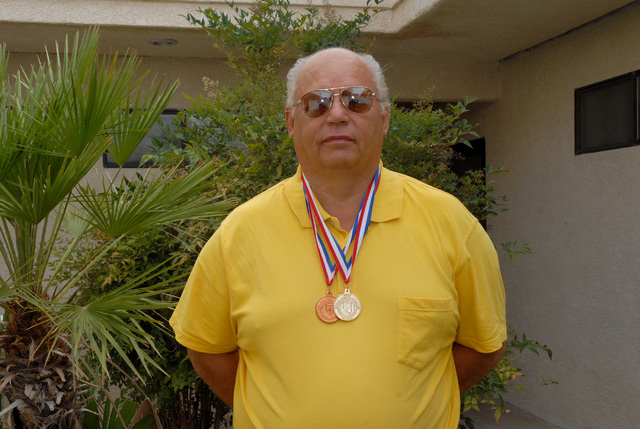 Summer is gone but that doesn’t mean summer sports are. During the fall in Southern Nevada, now that the heat of the summer has subsided seniors are getting in shape for the Nevada Senior Games.

Al King is a printer by trade and now is retired and lives in Pahrump. He is a big man and is well over six-feet tall. He has a unique senior games story.

When he was a young teen he used to swim in high school competitively.

“I was a high school swimming star having never lost an individual swim race,” he said. “I went to Stratford High School in Stratford, Connecticut from 1963 to 1966 and I was always one of the best swimmers in our conference.”

He said he would train religiously by swimming against the tide in the Housatonic River on a daily basis. His family home was right across the street from where the river met the Atlantic so it was convenient. He would play and swim with the kids there sometimes all day long. This swimming made him a fast and strong swimmer. He never swam past high school.

King moved to Pahrump in 1976 and commuted to work in Las Vegas. In 1992 he was online and looking at track and field records when he came upon an ad for the Nevada Senior Games in Las Vegas. He saw that the record in Nevada at the time was 32 feet 6 inches for the shot put and this intrigued him.

“I thought to myself that I can beat that record,” King said. “Then I looked up to see exactly what kind of events that they had and to my surprise they had all kinds of swimming events, so I signed up for both.”

He then found himself training for the 1992 Nevada Senior games, which usually happens around October.

He had a pool in his yard and started swimming every day. He thought he was in good shape for 54 years old, but nowhere good enough to be able to be respectable in an event like the 50-yard freestyle. He certainly was not good enough to compete against other swimmers, who probably did this sort of thing all the time.

“I practiced at Bonanza High School,”King said. “I continued to swim and to push myself as I didn’t want to be embarrassed at this competition. My times were getting much faster. It seemed the more I practiced the faster I was getting. As far as the shot, I knew I could throw across the street and that was 36 feet.”

The day of the competition came. He had to go to UNLV track stadium for the shot put and then go down Bonanza Road to where the swimming venue was.

The shot put event was being held at UNLV’s track stadium on their campus at 8 a.m. in the morning. King arrived early with his number one fan, his mother, around 7:30 a.m. He was up against 14 other men in the shot. At the track he remembered seeing a lot of muscle-bound men, but nothing that impressed him too much.

“On my very first throw, to my surprise, I threw it almost 37 feet,” he said. “I then learned I just broke the Nevada record.”

Some guy then came up to me and said,“Congratulations sir, you just broke the Nevada senior record in the shot put.”

“Man was I proud. Well I ended up winning the bronze medal with a throw right around 39 feet 7 inches, which was a distant third compared to this track coach from California, who tossed the shot right around 46 feet. His throw looked like a cannonball came out from his arms. They played the national anthem just like the Olympics and you get all choked up,” King said.

He then hurried down to the pool, but he found out he didn’t have to rush because his event was postponed. King was told the event was pushed back because three former Olympic gold medalists had entered the event and had pushed the time back to the last event. King remembered thinking, “They don’t even know who I am, let alone think that I could win the race against three former Olympic gold medalists.”

After a while he went up to the official’s desk and asked if he could have lane number one. The official said, “NO.”

He asked why and they told him, “We are going to wait and see which lane the three former Olympians want.”

King showed his anger but was told they could just scratch his name if he kept it up. He instead walked away in disgust. He was angry because they were allowing the Olympians to walk all over the event.

He was awarded lane five, which is right in the middle.

The race was what they called five-times certified, meaning that there were five time pieces in operation in case anyone broke the Nevada senior record, the U.S. record or even the world’s record.

The gun went off. In high school, King said no one ever beat him to the first turn.

“As I got to the turn I didn’t see any legs or arms on either side of me so I thought, ‘I’m dead last and they are all in front of me.’ I then swam real hard, I mean real hard. I pushed myself as hard as I could, but not knowing where I stood was just too much for me, so I did what you are never supposed to do. As I took my breath, I came up out of the water and looked left and then right to see exactly where I was. I didn’t see anybody in front of me so that meant that I was winning.”

King put his head down and continued swimming.

“As I touched the wall I looked up to see my name flashing in first place,” King said.

He said he almost passed out from not having any air to breath. He said all the people with the stop watches came over to congratulate him saying things like, “Wow, you just beat three former Olympic gold medalists.”

One by one the two Olympians came over in the water as is customary to shake your hand or pat you on the back. All except one, the Canadian, he seemed mad that he didn’t win and would not even look over at King.

Well it was off to the showers and since his race was the last race of the day there was no one left in the men’s shower room, but the Canadian and King.

As King stood up and grabbed his gym bag he looked over at him and said, “Stratford High and still undefeated.”