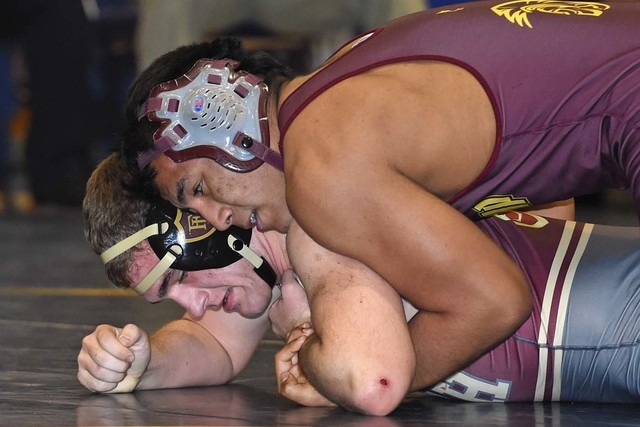 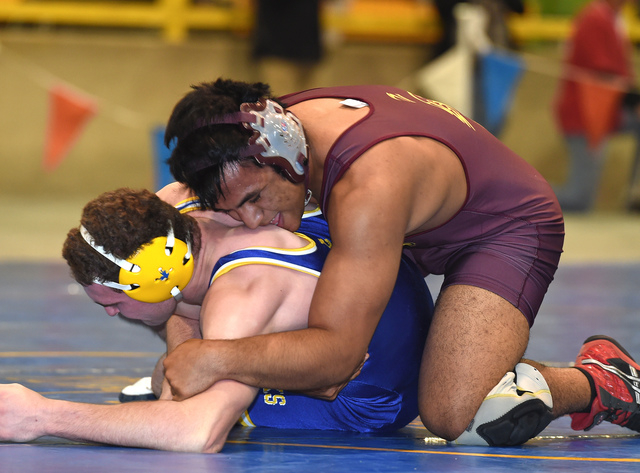 Wresting is all about making the weight and then beating all challengers. Abraham had gained a few pounds over the off- season. He was 220 pounds at the start of the season and had to drop weight.

This put Preciado into a whole different weight category. In addition, once at 195 pounds he then had to wrestle a very experienced Jax Clayton, also wrestling at 195 pounds. Preciado couldn’t beat him in a wrestle-off so that meant he was on the junior varsity team.

“I started off the season upset because I was the returning 182-pound champion and I ended up in the junior varsity because I had such a tough kid in my weight class,” Preciado said. “I was sad at first for being on the JV and I even said to myself, ‘What’s the point of even going out for the season?’”

Time melted away the anger Preciado felt, for he realized that the coach still had a lot of confidence in him and had a plan.

“I was told to focus on going to state. At first it got to me and it was tough because I wanted to be with the varsity team, but I got over it.

He said what got him through this was his coach, Craig Rieger and his practice partner, the person he couldn’t beat, Jax Clayton.

“There is no way you can’t work. I surrounded myself with great people,” he said. “I partnered up all season with Jax (Clayton) as a training partner and we worked like no others,” Preciado said. “So every tournament we went to we dominated that class.”

“We were loaded up there and we just had good wrestlers everywhere,” he said. “I didn’t just say Abe you are going to wrestle JV. Abe wrestled off and he couldn’t beat any of them. He just happened to run into Jax Clayton. Jax threw those guys around. When he wrestled Jax he was thrown around.”

Rieger said he didn’t want him to quit. To Rieger, Preciado had too much time invested in the sport.

“I told him, ‘Abe you are going to go and you will definitely be in the state final,’” he said.

Preciado focused on just getting better during the season. Despite only getting half the mat time as the other varsity wrestlers he remained a top wrestler on the team. In addition to the decreased mat time, he got into a car accident which kept him from wrestling at a major tournament around Christmastime and this slowed him down, but only in his head.

“This decreased time on the mat only made me more nervous when it came to regionals and state,” he said.

His faith in himself and hard work prepared him for the end of the season physically and he was entered as an extra at the regional tournament where he finished in the finals and had to wrestle his practice partner Clayton.

“I had a lot of faith in myself so it really didn’t surprise me that I made it to the finals at regionals and I knew my team did too,” Preciado said. “There was also no way I was going to disappoint my coach.”

Preciado didn’t beat his partner Jax at the regional finals but he met his goal of making the state tournament. He said there really was no doubt he would make it to state, but he was surprised how he finished.

On the second day of state he wrestled opponent Anthony Hummel of Lowry High School in the semifinal.

“I had never been so nervous in my life,” he said. “It was the most important match of my career because I wrestled a Lowry kid and it meant taking away 10 points from the Lowry team.”

He had never wrestled this kid before so he had no idea how he wrestled and no idea what he was going up against. Hummel was the number one seed in the North.

“I was a little intimidated. After I won, I was happy because I took points away from Lowry,” Preciado said. This was a major feat for the Trojans because Lowry had 14 wrestlers in the tourney that could score points. By the time Preciado had wrestled Hummel, the Trojans had whittled that number down to three.

After he had won Preciado knew he was done.

“That is all I was focused on was beating out the Lowry kid,” Preciado said. “Once I beat that kid I knew I did my job and I was happy with not wrestling Jax in the final. I didn’t need to wrestle him in the final.”

On the surface it looks like Abraham was forced by his coach to not wrestle Jax in the final and this was far from the truth.

Preciado said to him, this match wasn’t important. The important match had already been fought with Hummel. That was his state final. The truth was there in plain sight. Preciado wanted the team state wrestling title more than he wanted an individual state championship. Sacrificing himself for that title required little thought.

“At the end of the semifinal I knew I was going to forfeit the match. There are no hard feelings between Jax and me. We have been friends since second grade,” Preciado said.

Trojans Coach Rieger said he was impressed with Preciado after the semifinal match.

“What a great accomplishment to have two boys like that in the state finals,” Rieger said. “He knows how big it was. I had told him once I knew that we had won the state title that he could go and wrestle Jax. Jax was all for it and even said, ‘c’mon let’s go wrestle.’ And that is when he told me his job was done, and that impressed me.”

In all his 21 years of coaching wrestling, Rieger has never had this experience of being so deep with heavyweights where two of them ended up in the regional and state final.

For Preciado, he grew up with listening to stories about the 2008 wrestling team that won the state title. Now he knows Rieger will now be telling the story about the 2015 team.

“I am not upset that it’s over. We achieved our goal and we are state champions. We achieved the impossible,” Preciado said with a smile.