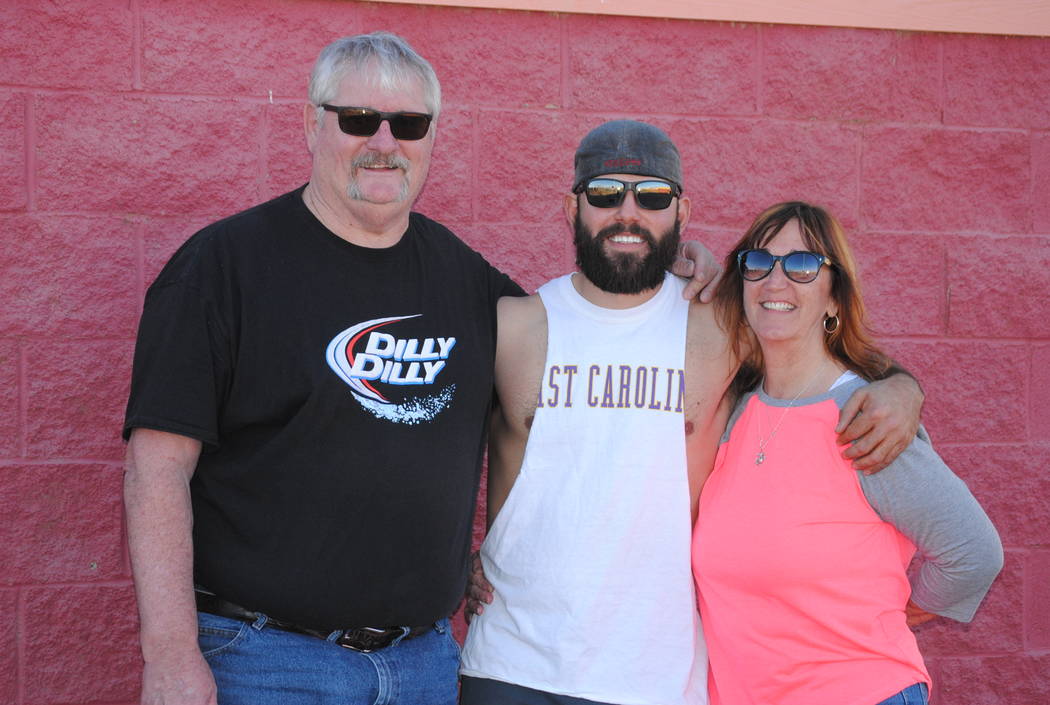 Charlotte Uyeno/Pahrump Valley Times Cody Nielsen, a 2008 graduate of Pahrump Valley High School, with his parents Dennis and Diane after the Maroon and Gold alumni baseball game Saturday, Feb. 17, at the school. The elder Nielsens drove 650 miles from Boise, Idaho, to attend the event. 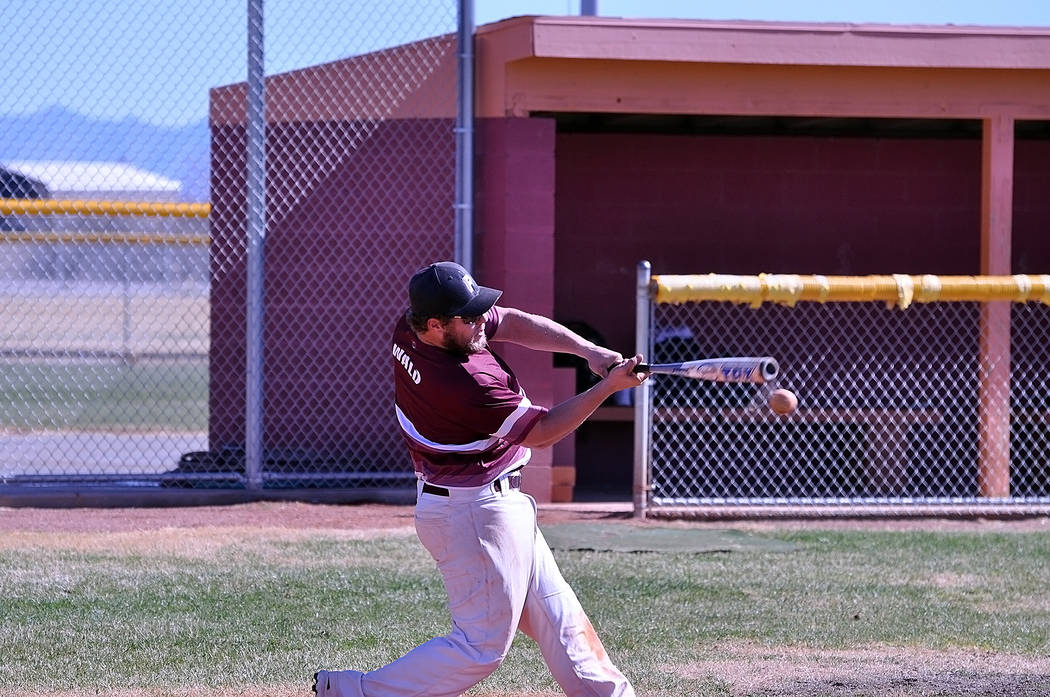 Horace Langford Jr./Pahrump Valley Times Ethan Wald of the Pahrump Valley Class of 2008 participates in the home run derby before the annual Maroon and Gold Game on Saturday, Feb. 17, at the high school. Wald was one of five players from the class of 2008 to play in the alumni game. 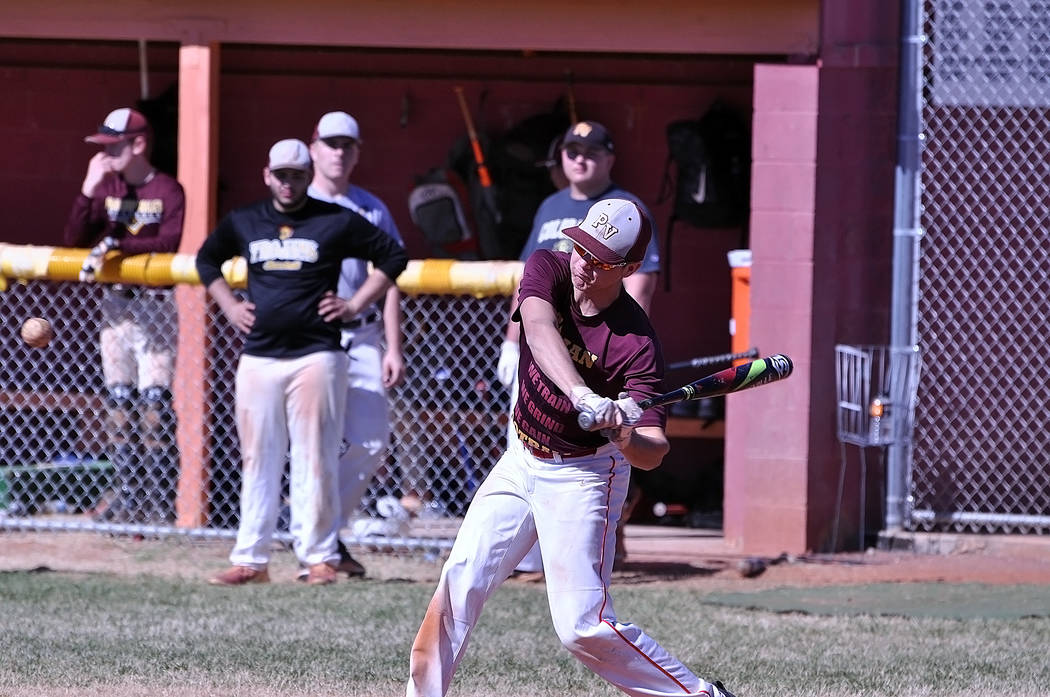 Horace Langford Jr./Pahrump Valley Times Pahrump Valley baseball players and alumni participate in a home run derby Saturday, Feb. 17, before the annual Maroon and Gold game. The Trojans alumni used a late rally for an 11-3 victory over the current team. 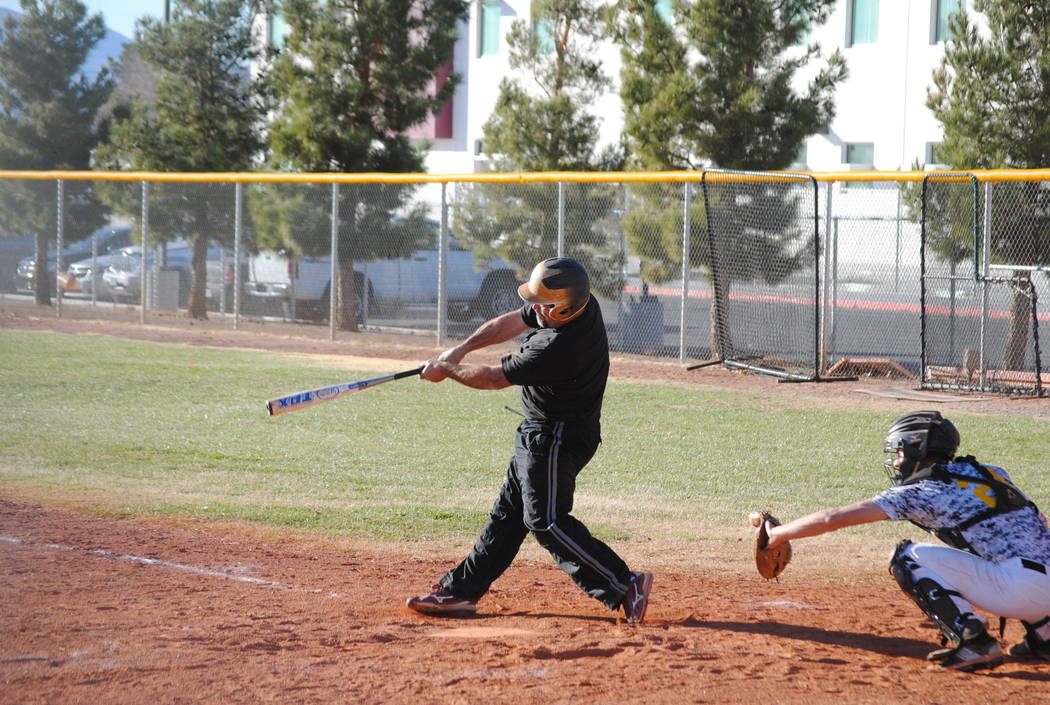 Charlotte Uyeno/Pahrump Valley Times Former Pahrump Valley baseball coach and athletic director Rich Lauver of the class of 1993 starts an eighth-inning rally with a double for the alumni team in the annual Maroon and Gold game Saturday, Feb. 17, at the high school. 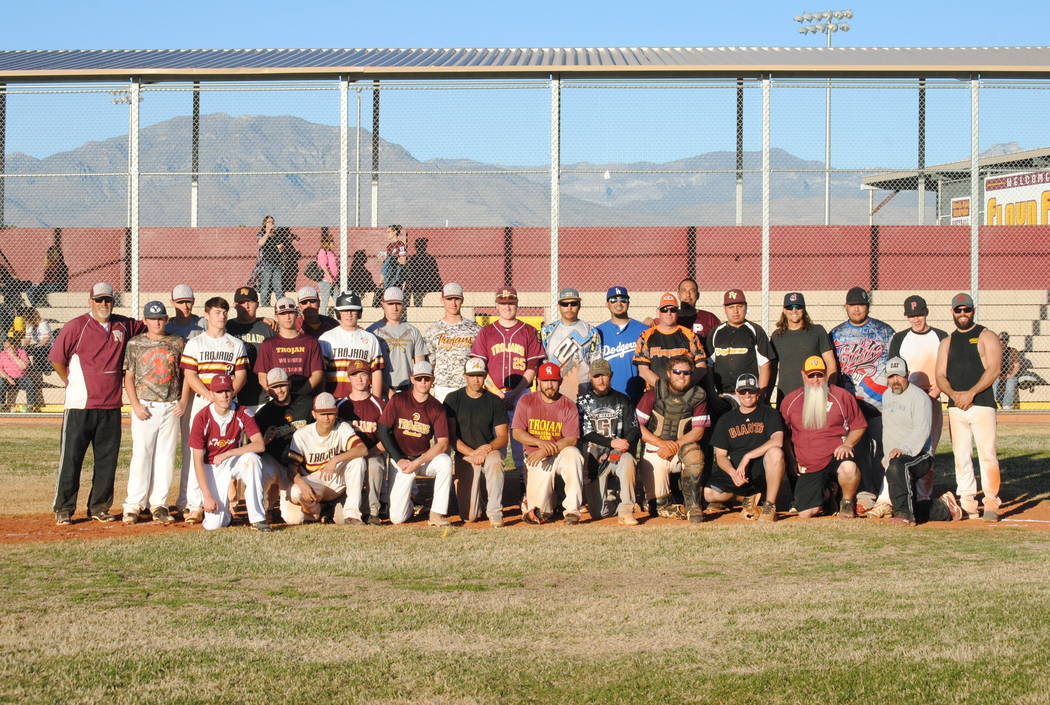 Cody Nielsen had some good reasons for not making it to Pahrump Valley’s Maroon and Gold alumni baseball game in recent years.

After graduation in 2008, he played some college baseball, lived in Las Vegas for a while, then decided it was time for something different.

So he joined the Marines.

After two tours of duty overseas, Nielsen returned safely from four years in Iraq and Syria in December and now makes his home in Las Vegas. He was sure not to miss his next chance to take the field at Pahrump Valley.

“It’s my first time being around these guys in 10 years,” Nielsen said. “We had a solid graduating class, 10 of us that played from T-ball all the way up.”

Five players from that group were back Saturday to help the alumni team put together an eighth-inning rally to hand the current Trojans an 11-3 defeat.

Cody wasn’t the only Nielsen in attendance. His parents, Dennis and Diane, drove 650 miles from Boise, Idaho, to catch up with old friends in the stands while their children did the same in the dugout.

“This was our social life,” Dennis Nielsen said. “All the baseball games all those years, I don’t think I missed one.”

Some of the other parents recognized the Nielsens more easily than they recognized their son. The younger Nielsen was the classic 98-pound weakling for much of his youth, but no longer.

“I didn’t break 100 pounds until my senior year of high school,” said Cody Nielsen, sporting a shirt meant to show off his bulked-up frame. “I was a completely different player in high school. I was a lot slower, a lot smaller.”

Trojans coach Brian Hayes said he inherited the concept of the alumni game from former coach and athletic director Rich Lauver, who ended up starting the winning rally for the alumni team with a double after flirting with a home run down the line in right field earlier in the at-bat, much to the delight of the crowd.

“We want to get guys who played for us before out here and let our young guys play against them and keep a little tradition going,” said Hayes, who added he was pleased at the turnout after the game was moved to a Saturday afternoon instead of a week night because of work installing lights at another field.

For those who still live in the area, playing meant a lot.

“It’s a passion of mine,” said another 2008 graduate, catcher Ethan Wald. “Any chance I get to play the game I always do the best I can.

“We were a big baseball class. We played on the same Little League, Legion teams, all-star teams. We had a camaraderie. As a catcher, I could look down to our third baseman and know I was picking a runner off.”

That group also showed their younger rivals some quality defense, with Wagner making running catches in the outfield, Nielsen chasing down and tagging out a runner trying to scamper back to first after a failed try at a stolen base and Wald making the final out by properly backing up first base and making a play at second after a bad throw on an infield grounder.

And yes, there is pressure to perform even in an exhibition being played for fun.

“I do a lot of coaching,” Wald said. “There were a few kids in that other dugout that I’ve had at a lower level, and catchers at a lower level, too, so for me to not back up first base or do something like that, you know I’d be hearing about it.”

Plenty was heard throughout the game, whether it was Wald talking about how tired he was in the late innings or old teammates needling each other. “I don’t think I saw Cody run back a player in my whole life,” was the shout from the dugout on Nielsen’s solo rundown play, and a stolen base a few innings later prompted, “Cody stole a base? Cross another one off the bucket list.”

The joy of playing baseball combined with the joy of seeing old friends was the theme of the afternoon.

Wagner was feeling good early, winning the home run derby before the game, and not quite so good late, showing the effects of an apparent pulled muscle.

“We say every year that we’re going to start training a couple of months aheads of time, but it never really works,” Wagner said. “We usually start a couple of weeks out. We start throwing, hitting a little bit. It’s good. It brings everyone back together again.”

There was not one but three Wagners on the alumni team, with Iggy joined by Matt, class of 1998, and Ray, class of 1996. “They come every year,” said event organizer Charlotte Uyeno, whose sons Chad and Brandon played while she took photos, tracked home run derby entrants and grilled hamburgers and hot dogs for the snack bar. “They never let me down.”

“We’ve had a few guys come back every year,” Hayes said. “We’ve had years where a couple guys flew in specifically for it, so it’s kind of a big deal for some of them. Some guys try to work their schedule around it; some guys can’t make it.

“We’re hoping it gets to where guys can find the time to get out here and compete with our young guys and kind of let the young guys see the guys who set the table before them.”

“Each year it seems like it’s more fun,” Wald said. “You get to see new people each year, and some of the older people like Keith (Baltutat, class of 1990). I knew Keith when I was growing up, and to play on a baseball team with him just blows me away.”

In an odd twist, had the game been the regulation seven innings of high school ball, the current Trojans would have walked away with a 3-2 win, the key hit was a two-run single by leadoff batter Cole Walker in the third inning. But the exhibition game was nine innings, and the eighth proved critical.