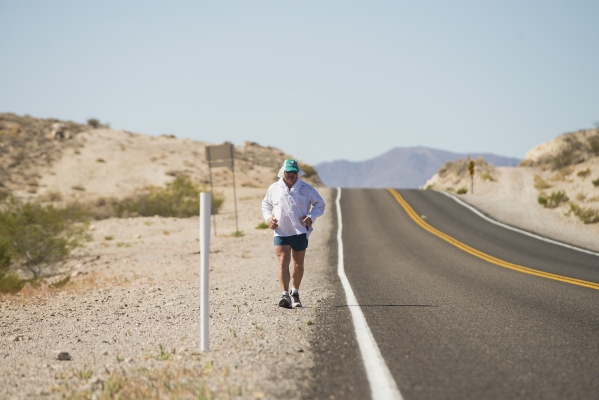 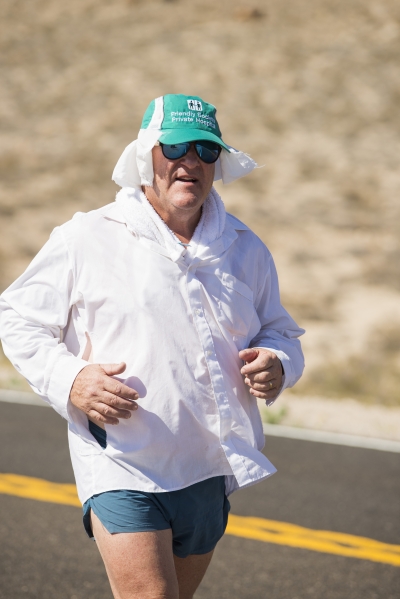 Pahrumpians are used to seeing runners out jogging in the heat. That’s what joggers are faced with when they live in the desert, but most will jog really early or late in the evening to avoid the heat of the day.

Ultra-runners are a different breed. Every year we see their pain in the paper when they run the 138-mile trek from Death Valley to Lone Pine each year. These people are truly crazy. They actually seek out the heat to run in.

The PVT caught one such ultra-runner, David Holleran, running Death Valley to Beatty last weekend. He is from Queensland, Australia and came to Death Valley just to run in the desert. Holleran is 59 years old.

“I ran my first desert (the Simpson) in 1995,” he said. “Last year I ran the Great Victoria Desert to complete all 14 deserts in Australia.”

He said he thought that ending his desert running in Death Valley would be the thing to do.

“I created the opportunity this year to run Death Valley and Amargosa from Furnace Creek to Beatty,” the runner said. ” I have heard much of Death Valley and thought this would be a fitting end to 21 years of desert running.”

Holleran said he holds 14 world desert records for running and found Death Valley to be as tough as many of the Australian deserts.

“In my run to Beatty, I encountered extreme heat and a 17-mile uphill battle as well as encounters with a rattlesnake, coyote and many scorpions,” Holleran said. “But overall it was one great experience.”