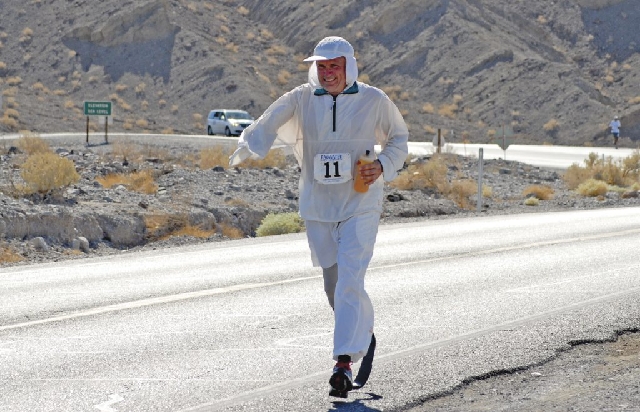 When people find out that there is a foot race in Death Valley, they respond by saying, “Oh, they must run it in the winter.” Their jaw usually drops when they are informed it is run during middle of the summer.

They are floored when they are also informed the race is 135 miles long.

The AdventureCorp Badwater Ultramarathon Race attracts runners from all over the world. This year’s race will be the 37th annual race through the hottest place on Earth.

This year’s race just happens to follow a historic heat wave which has had temperatures soaring upwards of 130 degrees in Death Valley.

The record is 134 degrees and this is the 100th anniversary of this historic temperature.

This year 97 runners from 18 different countries will try to win the race. The race is billed as the most grueling race in the world.

Sixty-six of the runners will be from the United States.

Weather forecasters predict the average temperatures to be in the 120-degree range for race time on July 15.

The race will start at its lowest point in Badwater at the altitude of 280 feet below sea level and travel 135 miles to Mt. Whitney Portal at the elevation of 8,360 feet above sea level.

The fast racers can make the mileage in about 24 hours. Last year’s champion was Mike Morton, a 40-year-old runner from Lithia, Fla. His time was 23:42. Morton not only won last year’s race, he was voted the 2012 UltraRunning magazine North American ultramarathon runner of the year.

His female counterpart was Japan’s Sumie Inagaki, 46. She lives and trains in Nagoya, Japan. Inagaki said last year was only her second time running the race. When she competed the first time, she finished as the seventh runner. The middle-aged runner said she trained 100 miles per week for the event. She did not train in hot weather. No heat in Japan can compare to Death Valley.

Morton and Inagaki will not be making the trip to Death Valley this year, which leaves Oswaldo Lopez, the 2011 champion as a heavy favorite.

Lopez is a Fresno, Calif. native. He trains 60-70 miles a week in the nearby Sierra Nevada Mountains. In 2011 he finished with a time of 23:41. He said he runs mainly around Fresno to condition for the heat. Lopez is 41 years old this year.

She wrote a book about her accomplishments called, “The Extra Mile.” The mother of five children is the race director of the Tucson Marathon and has been since 1995.

In the women’s field there are 10 rookies and 13 veterans.

The oldest racer will be 76-year-old Karsten Solheim from Glendale, Ariz. This will be his first race.

The youngest racer will be Alexa Dickerson of Irvine, Calif., at 25. She is a veteran of the race. On her website she says she trains 60-70 miles per week. She works as a fitness coach and says she has been running since she was in high school. She finished as the 10th female with a time of 38:53. Last year was her first time at Badwater.

Chris Moon from Lanarkshire, England will be one of the most celebrated runners. He is 51 this year and runs the race with one leg. The retired British army officer lost his leg in an explosion in 1995 in Africa and has run the race non-stop since 1987.

According to Phyllis Nesky, of Furnace Creek Resort, every year racers fill the park. She said amazingly the park is just as busy during the hottest part of the summer whether or not the racers come.

This current heat wave has had visitors flocking to the park from all over to “feel the heat.”

The race will pack the surrounding area hotels and Furnace Creek will be sold out for the racers. The overflow will be tourists just coming to see Death Valley and they will be staying in Pahrump, Amargosa and Beatty.