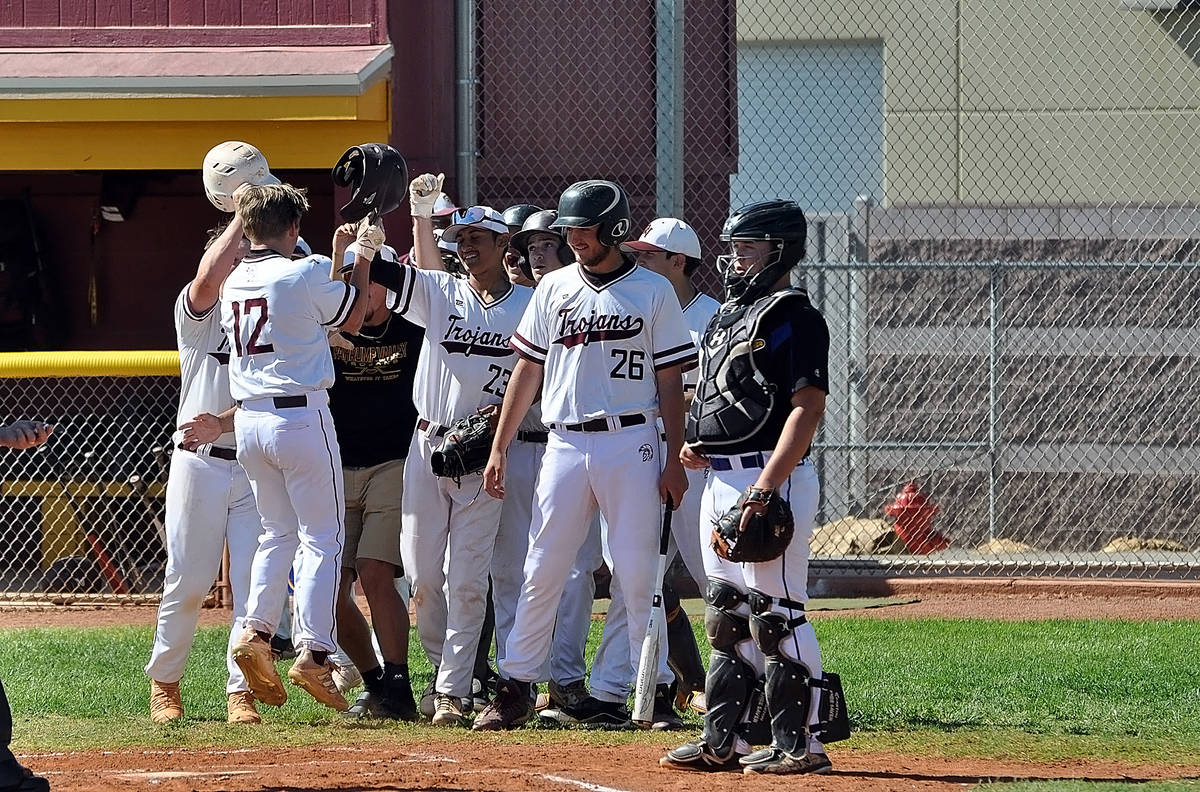 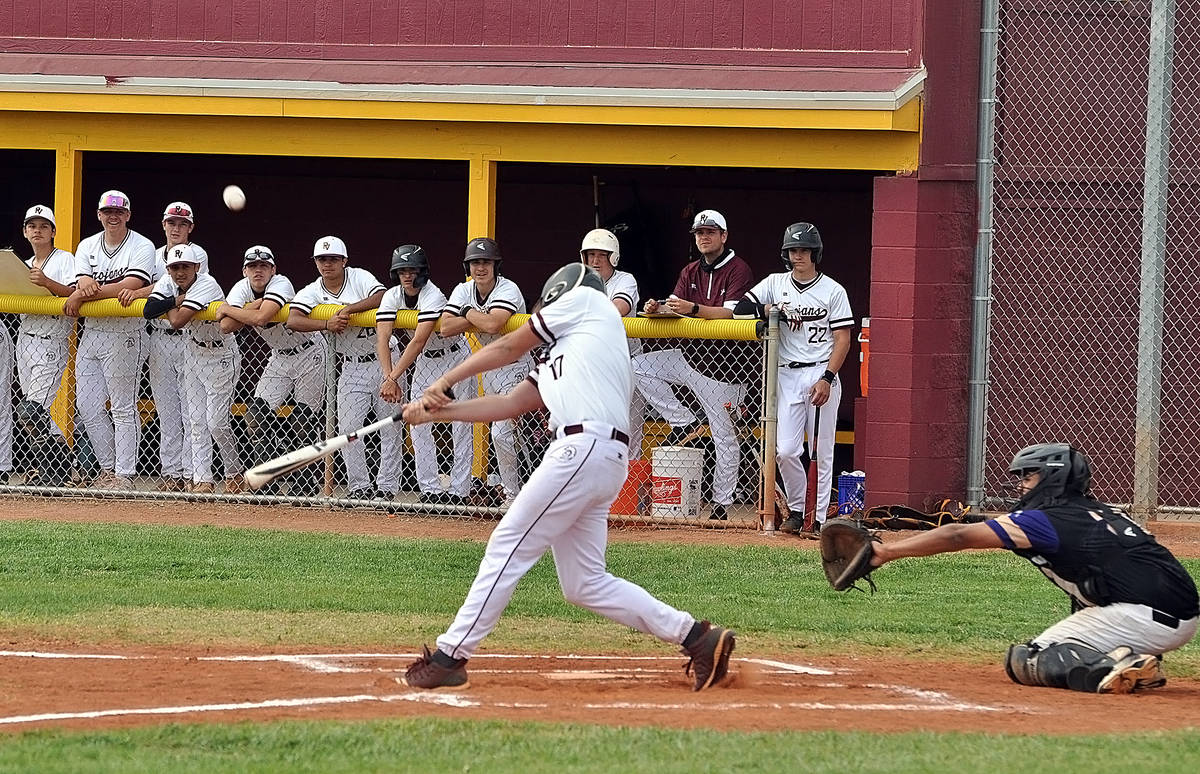 Horace Langford Jr./Pahrump Valley Times Jake Riding connects for a single against Sunrise Mountain earlier this year. Riding pitched a 5-inning shutout and had 3 hits, including a double, an RBI and a run scored in an 11-0 win over SLAM Nevada on Monday in Henderson.

Pitching? No bad news there. Senior Jake Riding was his usual dominant self, pitching a 2-hit shutout for the five innings necessary for the Trojans to defeat the Bulls 11-0 at Burkholder Park in Henderson.

Offense? No bad news there, as the Trojans hit the ball hard from the start. Junior catcher Coby Tillery drove in 4 runs with a 2-for-4 day, senior center fielder Jalen Denton went 3 for 3 and scored 4 runs while driving in a run, Riding went 3 for 4 with an RBI.

Fielding? No bad news there, either. The Trojans played error-free baseball and, with Riding striking out 9, didn’t have to make all that many plays to wrap up the win.

“This is kind of what we’ve been expecting,” Trojans coach Brian Hayes said. “Any time Jake is on the mound, we’re going to be in the game, and today it was nice to see our offense show up, which is what we’ve been waiting for all year.”

The top of the order led the way for the Trojans (8-7, 6-2 Class 3A Southern), with James Metscher, Kyle McDaniel and Denton scoring in each of the first two innings. McDaniel brought home Metscher both times, sending a rocket that could not be fielded past shortstop in the first and blasting a triple in the second.

The second inning was the big one for Pahrump Valley, as Denton and Riding followed McDaniel’s triple with RBI singles. Zack Cuellar walked and, one out later, Tillery ripped a 2-run single into left field. He later scored on a Metscher single, and the Trojans led 9-0 midway through the second.

“Even some of our outs today were loud outs, some productive outs, where before it was hit or walk,” Hayes said. “I think they’re starting to understand there are other ways to have a good at-bat.”

Meanwhile, Riding was almost untouchable. He allowed a leadoff single in the first to Connor Law, retired 11 consecutive batters, then issued a two-out walk to Thomas Trask-Fonoimoana. A single by Ethan Dequevara gave the Bulls a runner in scoring position for the first time all day, but Riding recorded the first of a game-ending streak of 4 strikeouts to end the inning.

Riding lowered his season ERA to 0.98. He has allowed 12 hits in 28 2/3 innings, compiling 39 strikeouts against 6 walks and allowing only four extra-base hits.He needed just 66 pitches to wrap up the win Monday.

The Trojans are expecting to draw a No. 2 or No. 3 seed when the tournament begins, with Boulder City the expected top seed in the other half of the draw.

“I think that whatever we do this week will set the tone for next week,” Hayes said.

Bishop Gorman 6, Pahrump Valley 2: The Gaels and Trojans were locked in a tight 1-0 game after four innings, but host Gorman scored 3 runs in the fifth and 2 more in the sixth on Saturday in Las Vegas.

Kyle McDaniel and Ryan Braithwaite had the only hits for the Trojans.

Pahrump Valley 11, Western 1: Freshman Justyn Ybarra went 2 for 3 with 3 RBIs and 2 runs as the Trojans routed the Warriors on Thursday in Pahrump.

Sophomore Kyle McDaniel went 3 for 4 and scored twice for the Trojans, Coby Tillery had 2 hits, and Braithwaite and Riding scored 2 runs apiece. The Trojans scored 6 runs in the bottom of the fifth to end the game.