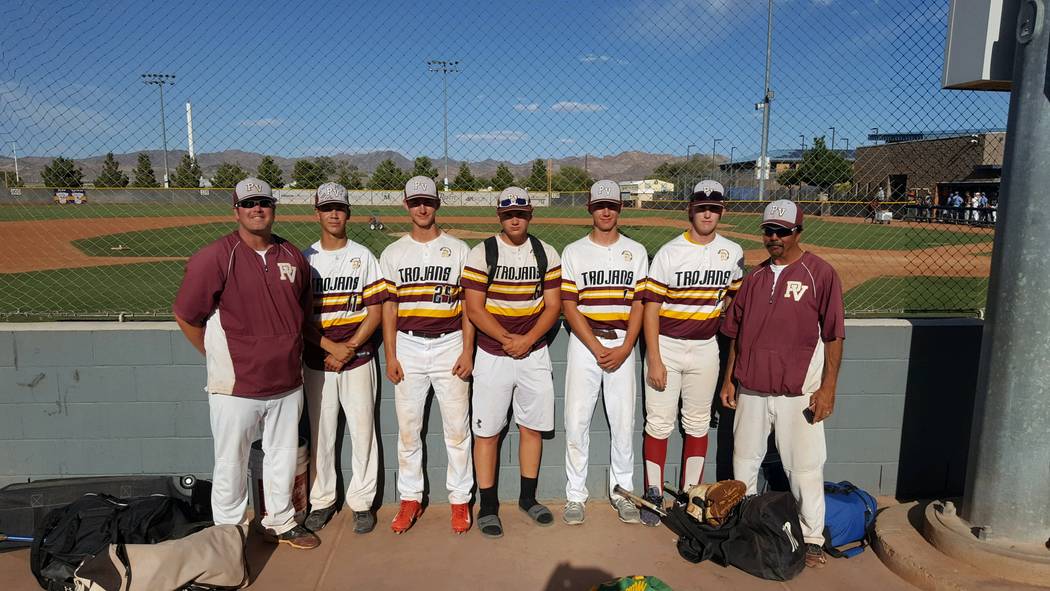 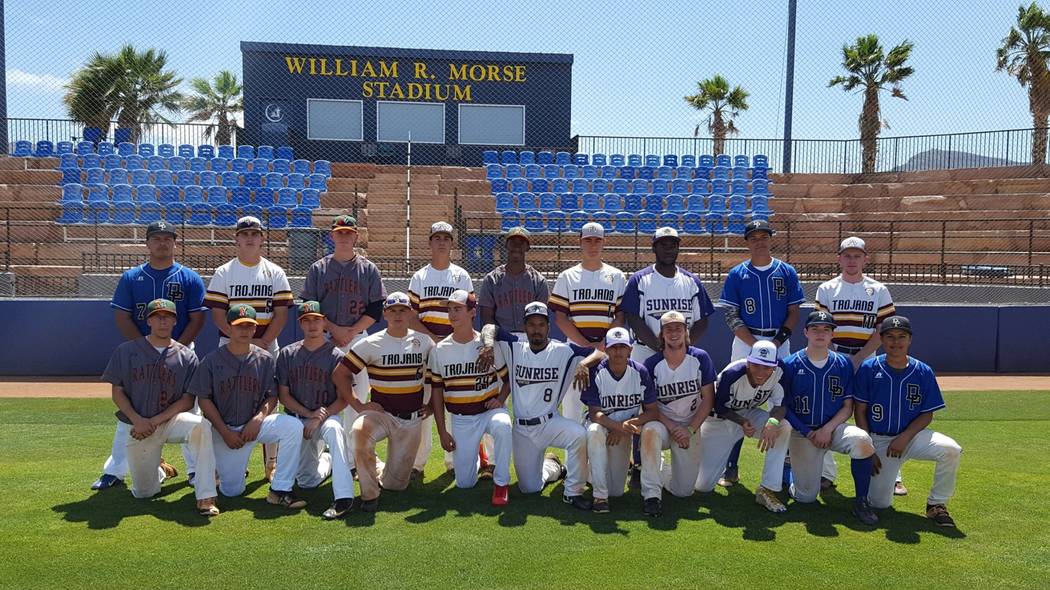 Special to the Pahrump Valley Times The 2017 Class 3A Sunset League All-Star team which played in the Southern Nevada Baseball Coaches Association Hall of Fame game on May 30. The team was coached by Trojans coach Brian Hayes and assistant Roy Uyeno.

Eight players from the Pahrump Valley High School varsity baseball team were selected to play in this year’s Southern Nevada Baseball Coaches Association Hall of Fame Class 3A Sunset League vs. Sunrise League all-star game on May 30 at College of Southern Nevada in Las Vegas.

Seniors Walker (2B), Hart (OF), Ferrer (P) and MacDonald (3B), as well as junior Sunset MVP Garrett Lucas and sophomore catcher Willie Lucas all participated in the game.

The players played the Class 3A Sunrise team, and they lost in a close game 13-8.

For the seniors on the Pahrump team, it was a chance to play with their teammates one more time.

“It was bittersweet playing with them one last time,” said graduate Parker Hart. “I did OK in the game. I wish all my teammates the best of luck in the future.”

Trojans coach Brian Hayes said the game featured all the first and second team 3A all-conference players that were able to attend.

Hayes was honored as this year’s coach of the year and so his staff was chosen to coach the event.

Coaches in attendance were Hayes, Roy Uyeno and Tom Walker.

According to Hayes, the game started with four of the six Pahrump Valley High School selections in the top six spots in the order. Drew Walker batted leadoff at second base, Parker Hart batted cleanup and played left, Willie Lucas caught and hit in the 5-hole and Garrett Lucas pitched and batted in the 6-hole. Josh Ferrer pitched an inning and John MacDonald finished the game at third base.

The Sunset League jumped out to a three-run lead in the first inning. Walker started it with a lead-off triple and scored on an RBI single from Hart.

Willie Lucas drove in Hart with an RBI ground out as the Trojans accounted for two of the three runs.

Garrett Lucas allowed only one hit and struck out four in his two innings of work.

Leading 8-5 into the sixth, the Sunrise side took advantage of several errors to put up eight runs in the top of the sixth inning to win 13-8.

“The game was a good experience for our players,” Hayes said. “Our boys definitely lived up to expectations. With five Trojans in the lineup for the Sunset side, we accounted for four hits, four runs and two RBI’s. With only one Trojan in the lineup we scored zero runs and allowed eight runs on several errors. Our coaching staff enjoyed being able to coach our seniors for one final game. It was especially nice to see coach Walker see Drew tear it up one last time.”