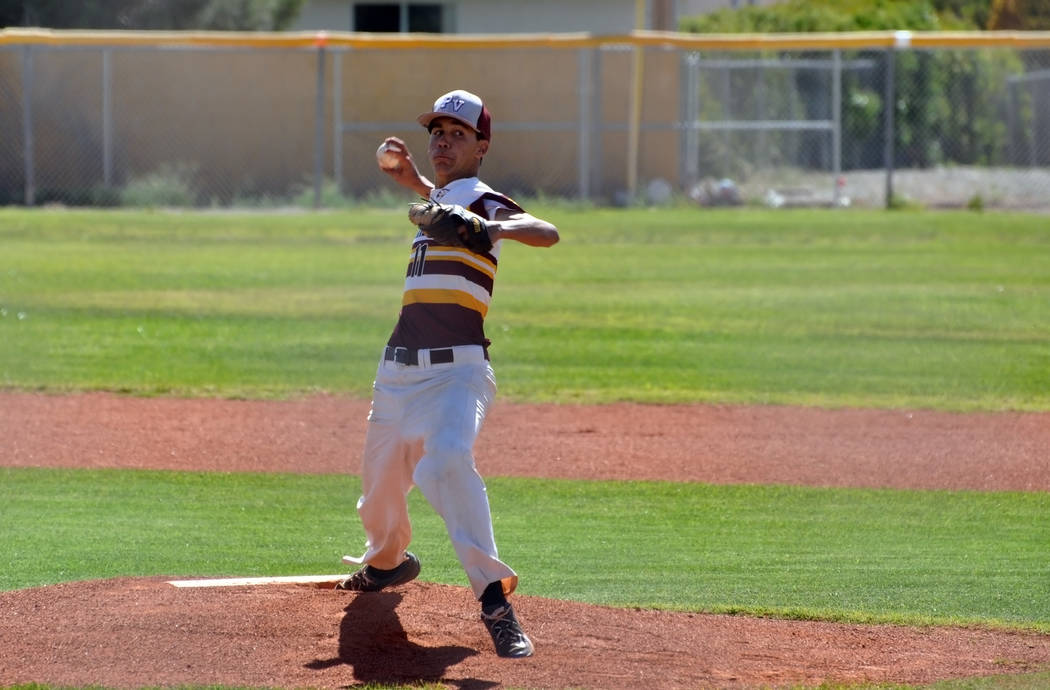 Horace Langford Jr./Pahrump Valley Times Senior Josh Ferrer had smooth sailing after the second inning and held on for the win against Western on April 28. Pahrump Valley beat Western 15-5. 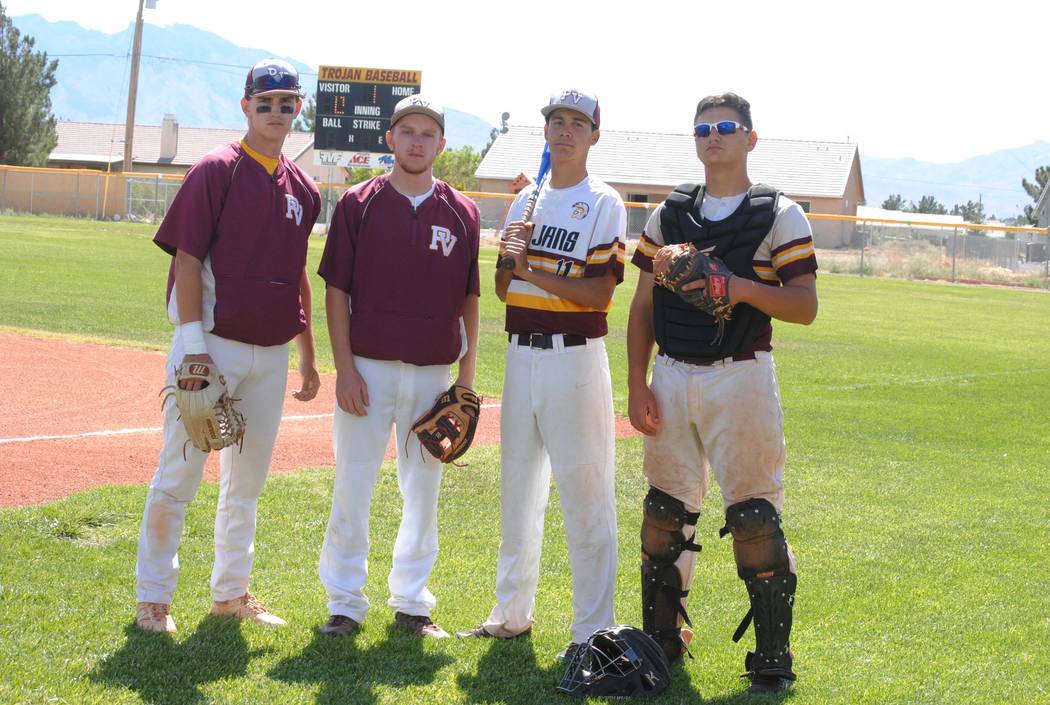 The Trojans baseball team cruised by Western in league play in a five-inning rout, 15-5.

The game was called in five due to the 10-run mercy rule.

The windy conditions on April 28 really didn’t factor in too much. Outfielder Parker Hart said it just made things a little harder to judge fly balls.

“It is more difficult to field a fly ball during windy conditions, but it is something us outfielders have to check before every inning,” outfielder Parker Hart said. “So we have no excuse if we miss a fly ball.”

Senior pitcher Josh Ferrer had a shaky inning in the second. The Warriors led off with an in-the-park home run, and looked like they would get more after a double scored another run but Ferrer was able to get two strikeouts to end the inning.

“The inside-the-park homer was a triple with a throwing error,” Trojans coach Brian Hayes said. “We looked like a little league team on that play.”

Ferrer held on for the win and pitched four and a half solid innings after that.

Pahrump Valley (16-11 overall, 8-0 Sunset League) overcame the two-run deficit in the second inning with an explosion of nine runs in the bottom of the second. The team went through the batting lineup twice, with eight hits, including a double by Parker Hart. John McDonald led off with a walk and then hits by Tyler Floyd and Cyle Havel tied the game up. Hart’s double cleared the bases and the Trojans just kept on hitting.

“It’s great to see the younger bats in the lineup produce runs, it helped us a ton,” Hart said. “That is something we’ll need in the playoffs, if we want to make a deep run.”

After their two-run inning, Western (1-19, 1-8) had one more rally in the fifth, scoring three runs.

In the top of the fifth inning, Ferrer gave the ball to Hart, asking him to finish the game because it was Senior Day.

“It was fun getting to pitch again,” Hart said. “I appreciate Josh giving up his complete game to let me have some fun on Senior Day.”

Hayes agreed that it was fun to have Hart pitch.

“Josh pitched well once again and finished 3-4 with two runs and two RBI’s as well,” Hayes said. “With two outs in the fifth, and us leading 14-2, Josh wanted to let Parker pitch, so we let him have a little bit of fun. They scored three runs and we played the bottom of the fifth, where Nico Velazquez had a walk-off RBI single to end the game via ten-run rule.”

Hayes was excited because he said with two more wins the Trojans will be the league champions.

“We will be league champions and earn the number one seed,” he said. “We brought up some JV guys recently to help us offensively. Tyler Floyd, Joey Koenig and Brendan Ormiston all may see some at-bats during the playoffs, so we plan on sprinkling them in to get them some at-bats. We thought it would be cool to let Cole play with his brother Drew on senior night.”

If the Trojans win the number one seed, they will play the number four seed of the Sunrise League at 3:30 pm., on May 9 at home.