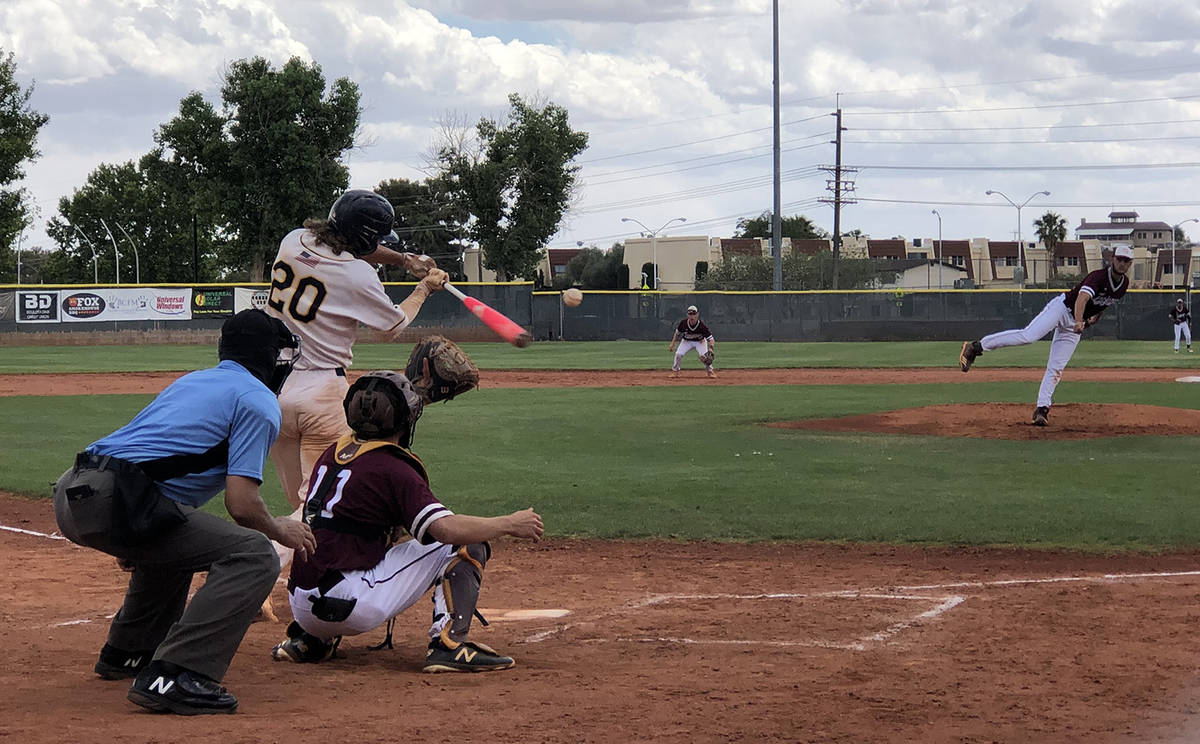 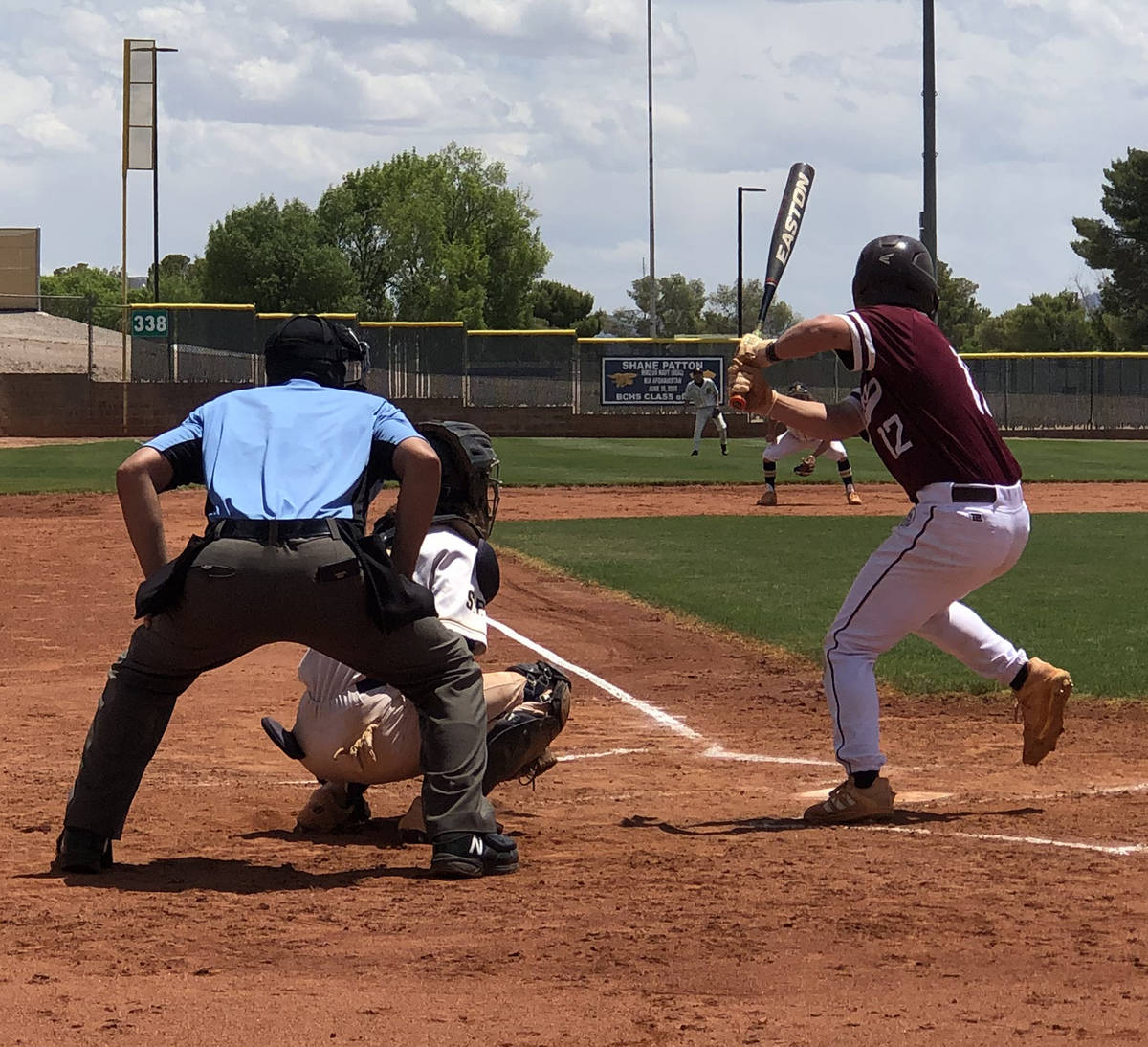 Tom Rysinski/Pahrump Valley Times Sophomore Kyle McDaniel steps up to the plate during the first inning of the Class 3A South Region Tournament final Saturday in Boulder City. McDaniel walked and scored the first of his 2 runs during the inning.

The senior pitcher led the Trojans in a host of categories this season, with 7 wins, 4 complete games, 1.75 earned run average, 36 innings pitched and .213 opponents’ on-base percentage.

Maybe it all caught up to him Saturday, as Riding couldn’t get through the third inning in an 8-4 loss to Boulder City in the Class 3A South Region Tournament championship game in Boulder City.

“You can tell he wasn’t himself,” Pahrump Valley coach Brian Hayes said. “He doesn’t walk guys, and I think he walked more guys today than he’s walked all year.”

Hayes was close with that comment. Real close. Riding issued 5 walks against the undefeated Eagles, bringing his season total to 11. Making matters worse for the Trojans (13-9), four of the five batters who walked would come around to score.

“I know Jake’s been our guy all year, but this was the first time he’s pitched two times in a week,” Hayes said of Riding, who posted a 5-inning 2-hitter Tuesday in a 10-0 win over Virgin Valley in the Trojans’ tournament opener. “In the history of our program, we really haven’t had a lot of luck with our guys doing that.”

BC senior Troy Connell, who tossed a no-hitter to beat Riding and the Trojans 1-0 on April 29 in Pahrump, again matched up with Riding, but this time the Trojans nicked him for a first-inning run. Zack Cuellar beat out a two-out infield single to short that scored Kyle McDaniel, who had walked.

The Eagles took the lead for good with 2 runs in the second, as a walk, a single, a bunt single, a throwing error and a fielder’s choice did the damage.

“Today was kind of frustrating,” Hayes said. “I don’t think Boulder City hit the ball that well, they just found holes. We told the kids that this was one of those games where little things lead to big things — a walk here, an error here and then a bleeder scores 2 runs.”

The third inning ranks among the roughest the Trojans endured all season. A leadoff walk, a single and a sacrifice put runners on second and third with one out. A walk loaded the bases, then BC junior Isaac Tuenge hit a chopper past third that with a different bounce could have been a force at any base but instead went through for a 2-run single.

Another walk led to a mound conference, as Hayes brought McDaniel in from shortstop to pitch, put Riding at third, moved Ryan Braithwaite from third to first and installed Fidel Betancourt at short. McDaniel’s first delivery was a run-scoring wild pitch, followed by a walk to reload the bases.

Senior Deavin Lopez hit a sacrifice fly, and then back-to-back ground balls that barely eluded Betancourt brought in the seventh and eighth runs. With two runners on base, the potential winning run was on deck, but a fly ball ended the inning.

McDaniel settled down after that, shutting out the Eagles over the final 3 innings, helped by a rare 3-2-3 double play turned by Braithwaite and catcher Coby Tillery in the fourth after BC loaded the bases again. McDaniel didn’t allow a clean hit the rest of the way.

Connell’s defense let him down in the fifth, and the Trojans made the most of it. After a dazzling stretch in which the senior retired 11 consecutive batters, including 6 strikeouts, two infield errors and an infield error loaded the bases for Denton, who ripped a ball off the fence but with only 292 feet from home plate to the pole in right only 1 run scored. Riding followed with an RBI single, and a third run scored on a Cuellar groundout.

In the space of 2 innings, the Trojans went from two batters away from a mercy-rule loss to being one batter away from bringing the tying run to the plate.

“It was good to see them battle back,” Hayes said. “We preach being resilient. We almost put something together in the last inning as well.”

That they did, as an infield single by McDaniel and a walk to Denton brought the tying run on deck. But reliever Joe Giunta induced a couple of lazy fly balls to give the Eagles their fifth consecutive region championship, beating Pahrump Valley in the final for the second time during that stretch.

This year’s Trojans had won eight of nine games going into the final, scoring 10 runs or more in each win and losing only 6-2 to Bishop Gorman, which won the Class 5A South championship Saturday in Las Vegas.

“It’s tough to see our seniors go out like this,” Hayes said as his players boarded the bus home. “I think we gave up 10 or 11 freebies. We cut that in half, and we’re probably still playing right now. It goes both ways. We scored our three when they made a couple of errors. That’s baseball.”