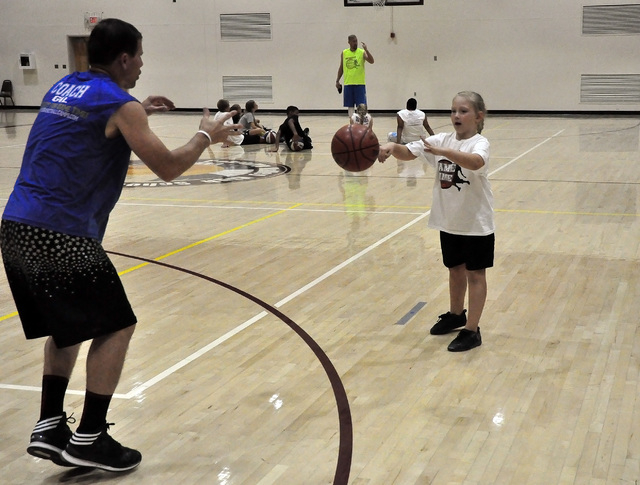 Game Time basketball camp will be coming to Pahrump from June 6-9 this year, but it almost didn’t.

Game Time Basketball Camps go to Las Vegas every year. Last year they came to Pahrump for the first time, but the turnout was low and it wasn’t going to come this year.

“I have been going to this camp for five or six years in Las Vegas because my daughter enjoys the game,” she said. “So when it came out last year, my daughter went. The low turnout was due to cost more than likely. It’s $180 for the four days. It is here and so I told Gil that people can’t afford those prices out here and I convinced him that I could get people here to come if he lowered his prices and he agreed to $130, which I think is a good price.”

The pricing varies with the amount of days one attends and age. For instance, one day is $40, two days $75, three days $105 and four days $130. Students three and a half to six years of age are only $7 per day but he needs a minimum of six kids.

Llewellyn said this year he will make it happen in Pahrump. He said he has 25 years of experience in teaching at camps and 12 years of running his own camp.

“The value of competing in this sport is huge,” he said. “The sport will make you more competitive in life. The coaching will be geared to the level of the athlete. We find out the level of the kid and gear it to that level. I assure you each kid will be challenged.”

According to Llewellyn, kids will learn more than basketball at the camp. “We teach the kids so much more,” he said. “They learn patience, motor skills and even how to share, for the younger kids.”

The camp will provide up to five coaches.

Llewellyn said he will try to also conduct a Special Olympics camp for free if he can get enough kids to come out. For more information contact Gil Llewellyn at 805-729-5539.