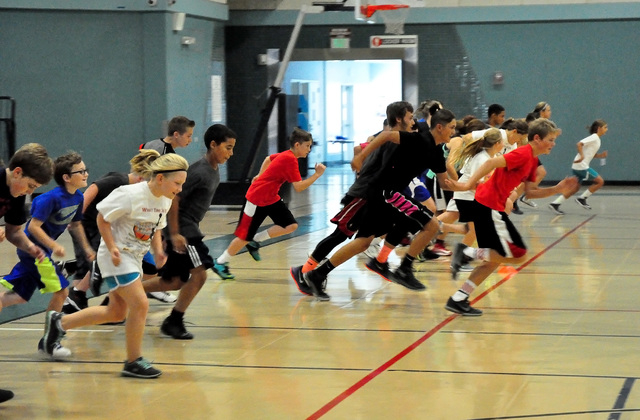 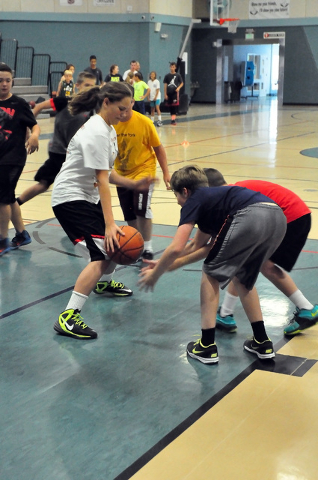 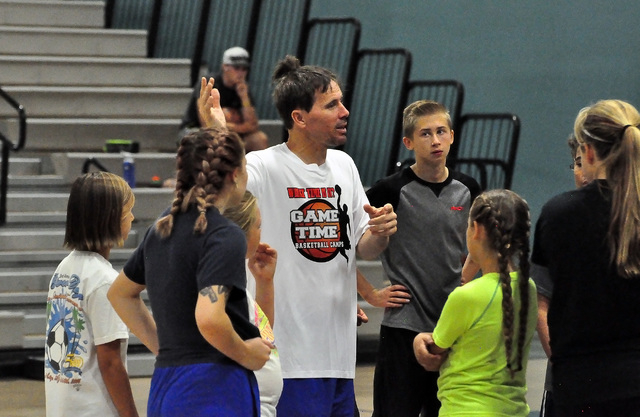 GameTime Basketball wasn’t too popular with the kids last year, drawing only seven players to its Pahrump camp.

This year is a different story.

Organizer Gil Llewellyn returned to try again this year and it was a complete success. The camp was held this week at Rosemary Clarke Middle School from Monday through Thursday saw 52 kids come through its doors.

Llewellyn travels throughout the country with his basketball camp and has a passion for the game. He has been doing camps for 12 years and his mission in life is to pass on the culture of basketball to the younger generation, but he says he also teaches other life skills besides the game of basketball.

“I love teaching beyond the hoops,” Llewellyn said. “That means I am teaching life skills on how to communicate better, teamwork skills, listening skills or even breathing skills. Some kids just need to learn how to calm themselves down.”

He added, “So many kids come to these camps that won’t play at the varsity level so I want these kids to have fun. At the same time, the kids also have to be taught when to step back when they stop having fun.”

The coach believes that personal development comes first before the game of basketball.

“At my camps, if I had to wrap everything up, I would say we stress time with the ball,” he said. “Every kid (pointing to all the balls on the gym floor) must bring a ball. Ball handling is important.”

The camp had every age group of kids from elementary school through high school.

“We are able to meet all the needs of all the age groups,” he said. “And even have time to give some one-on-one instruction with the older kids. At the camp the kids do drills and we have a lot of informal games. We teach the kids to attack and at the same time they must protect the ball. So protection is the key.”

The coach also said the camp pays a lot of attention to the different aspects of shooting: free-throw shooting, tired shooting, shooting under pressure and nervous shooting. He uses three to four coaches that travel with him and this allows him to personally instruct many of the kids.

“I tell the kids when they are shooting free throws that they must have a routine,” Llewellyn said. “It could be anything from hitting your leg before your shoot to rubbing your nose.”

Llewellyn thanked all the parents that made the camp happen.

“This camp happened because some parents were coming to me in Las Vegas and finally asked me to come to Pahrump. Last year we only had seven kids come out. The parents really hustled to keep us out here.”

Bryce Odegard was one of the kids to come through the door. Odegard was the point guard for the Trojans varsity team this year.

“I learned a lot and solidified my basketball skills,” he said. “I would recommend this to all the varsity players. Not too many teammates showed up here and for most players, not playing in the summer hurts the team. Why not come and do the camp?”

Sabin Chaidez was a guard for the girls’ high school team and started as a freshman. She said the reason why she started on the high school team was because she has come to this camp for seven years in a row.

“At the camp I learned how to keep my confidence up,” she said. “When I first came to this camp in fifth grade I could not dribble the ball down the court and now I can. I have also raised my shooting percentage at this camp.”

Tayla Wombaker said she loved the scrimmage aspect of the camp.

“We get to play against older kids and that’s something we normally don’t get to do,” Wombaker said.

Jazmine Aldana, a sixth grader, said she liked the drills.

“I loved the numbers,” Aldana said. “This is where the coach calls a number and those that have that number have to come out onto the court and you compete against them.”

“In the defensive part of the drills they pushed us hard and I also liked a drill named after the college, UCLA, which was a three-on-three drill.”