Richard Stephens/Special to the Pahrump Valley Times Beatty senior Geo Maldonado drives to the basket against Sandy Valley on Friday night during the Hornets' 65-55 victory over the Sidewinders. 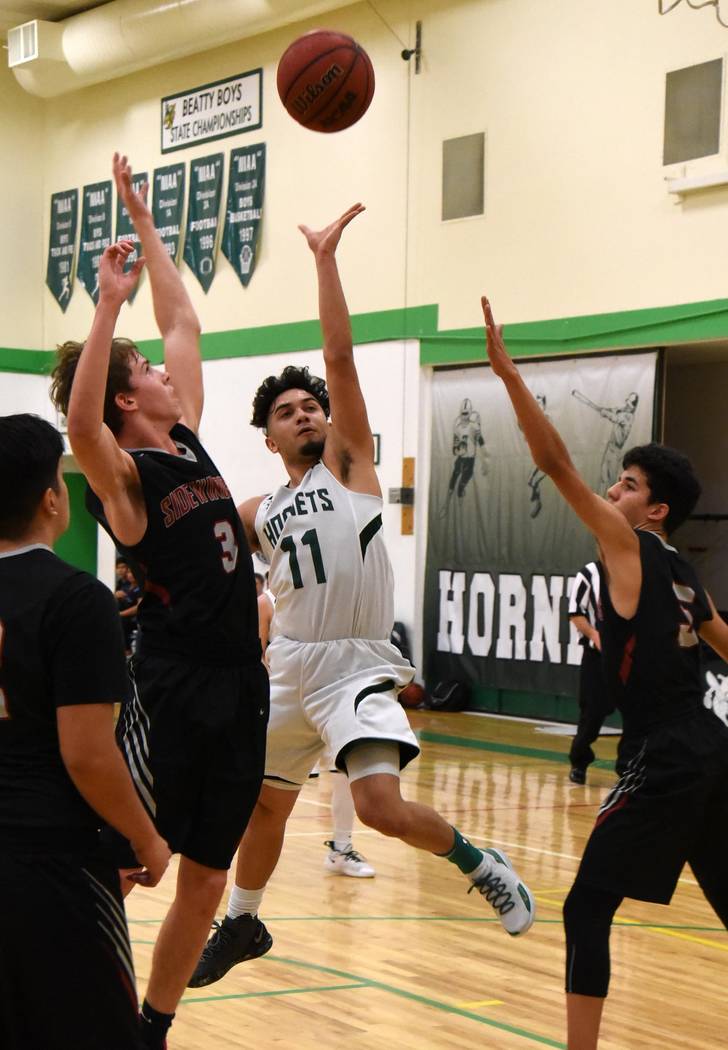 The Beatty High School boys basketball team will meet Tonopah for the third time this season after qualifying for the Class 1A Central/South Region Tournament.

The Hornets did their job Friday night with a 65-55 home victory over Sandy Valley, although at first it was anybody’s game.

“Sandy Valley came out firing in the first quarter, and it seemed like they could not miss a shot, even with someone in their face,” Beatty coach Steve Sullivan said. “But the boys kept their cool and executed their offense.”

The result was an 18-18 tie after the first quarter, but the Hornets outscored the Sidewinders 31-20 over the middle two periods and coasted home.

“Offensively, they continued to move the ball around, looked for the extra pass and only turned it over 13 times,” Sullivan said. “Defensively, they kept up the pressure, contesting shots and taking away lanes which led to defensive stops that started adding up and allowed us to extend our lead.”

The win put Beatty in a three-way tie for second place in the Southern League, and tiebreakers left them behind Pahranagat Valley and ahead of Word of Life. Armed with the third seed, the Hornets (8-5, 6-2 1A Southern) will enter Thursday’s regional opener against Tonopah, the second seed from the Central League. Game time is 8 p.m. at Douglas High School in Minden.

The Muckers (15-7, 6-4 Central) have defeated the Hornets twice this season, a 57-54 affair Dec. 4 in Tonopah that was Beatty’s opener and a 56-32 game Feb. 12 in Beatty in which the Hornets were looking ahead to Friday night’s critical game against Sandy Valley.

Senior guard Alan Sandoval starred in the first game for the Hornets, scoring 26 points on 9-of-21 shooting from the floor and a 7-of-9 game from the line. Jacob Henry added 10 points for Beatty. Tonopah was led by senior forward Alex Katzenbach’s 12 points and 10 rebounds, while senior Lee Ketten added 11 points and 9 rebounds.

In the second game, Katzenbach and Kobe Bunker each scored 13 points for the Muckers, while Fabian Perez paced the Hornets with 10.

“In order to beat Tonopah, or any team we’re going to face, we have to play some solid fundamental basketball,” Sullivan said. “We have to take care of the ball on offense like we did against Sandy Valley, and we have to always be battling on defense. Our defense needs to fuel our offense. Tonopah is a tough team, and every stage of the playoffs is going to get tougher, but our primary focus has been on us and making the adjustments we feel we need in order to be successful.”

Friday’s winner will advance to the state tournament regardless of the outcome of Saturday’s regional final at Wooster High School in Reno.