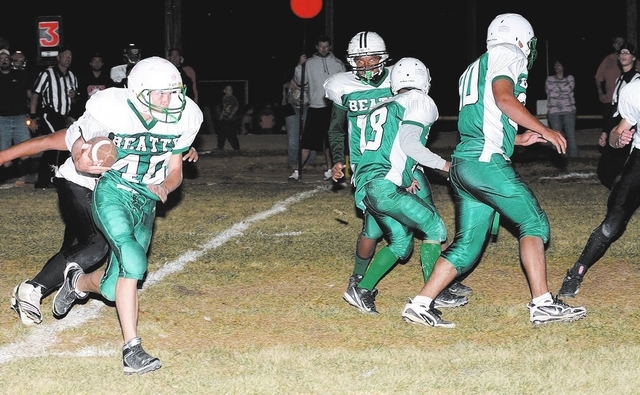 It was homecoming and Sandy Valley was coming into town. Usually this meant a win for the Beatty football team, but not this year.

Sandy Valley went out and got some offense in the off season. The Sidewinders had beat Beaver Dam 48-0 and 74-28. This was the same team that barely lost to Tonopah 26-22 in the beginning of the season. Sandy Valley downs the Hornets 28-15.

Beatty was up against a tough foe at 1-3 going into the contest. Hornets Coach Leo Verzilli knew his team should have had this one.

“We were close at halftime. They had a handful of athletes that could play and we started getting frustrated. We got out of position a few times and it cost us,” he said.

Verzilli said it came down to four big plays.

“We were in the red zone six times and only got 3 points to show for it. Our team needs to finish drives, and trust our teammates to do their job so we don’t have people trying to do too much,” he said.

The final game for the Hornets will be against the Spring Mountain Mustangs this Friday. Beatty will not be going to the playoffs, and will be playing for pride. The Mustangs are 3-2 and firmly in fourth place, but with a win can maybe get into second place.

Verzilli knows his team can play and wants his team to go in there and hit hard. Some of the Beatty fans think Spring Mountain is coming to hurt Beatty players and Verzilli said that was nonsense.

“Spring Mountain plays tough not trying to hurt anyone and they just know how to play hard. When you have 80-100 players to choose from you will find 10 kids that don’t mind hitting other people. They get good athletes and they hit hard,” he said.