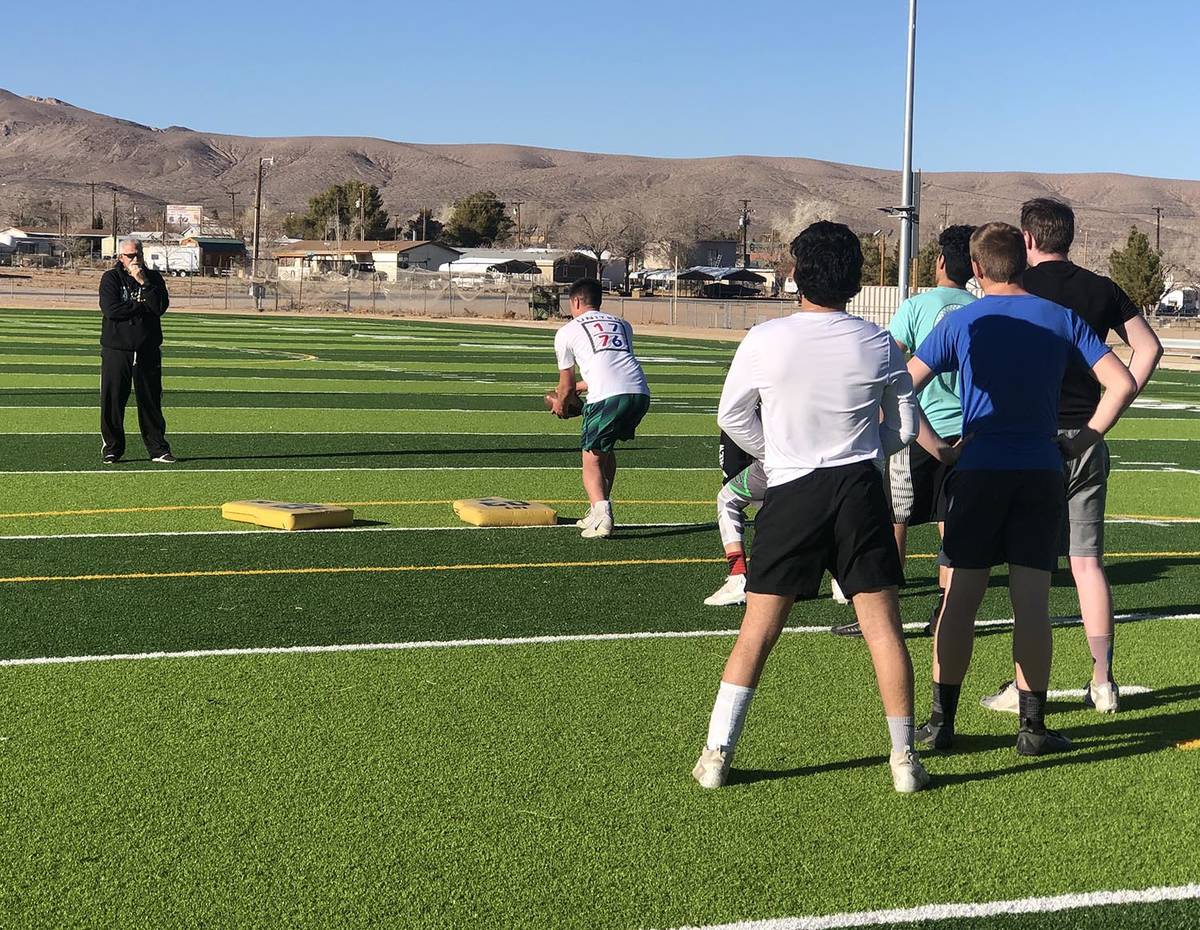 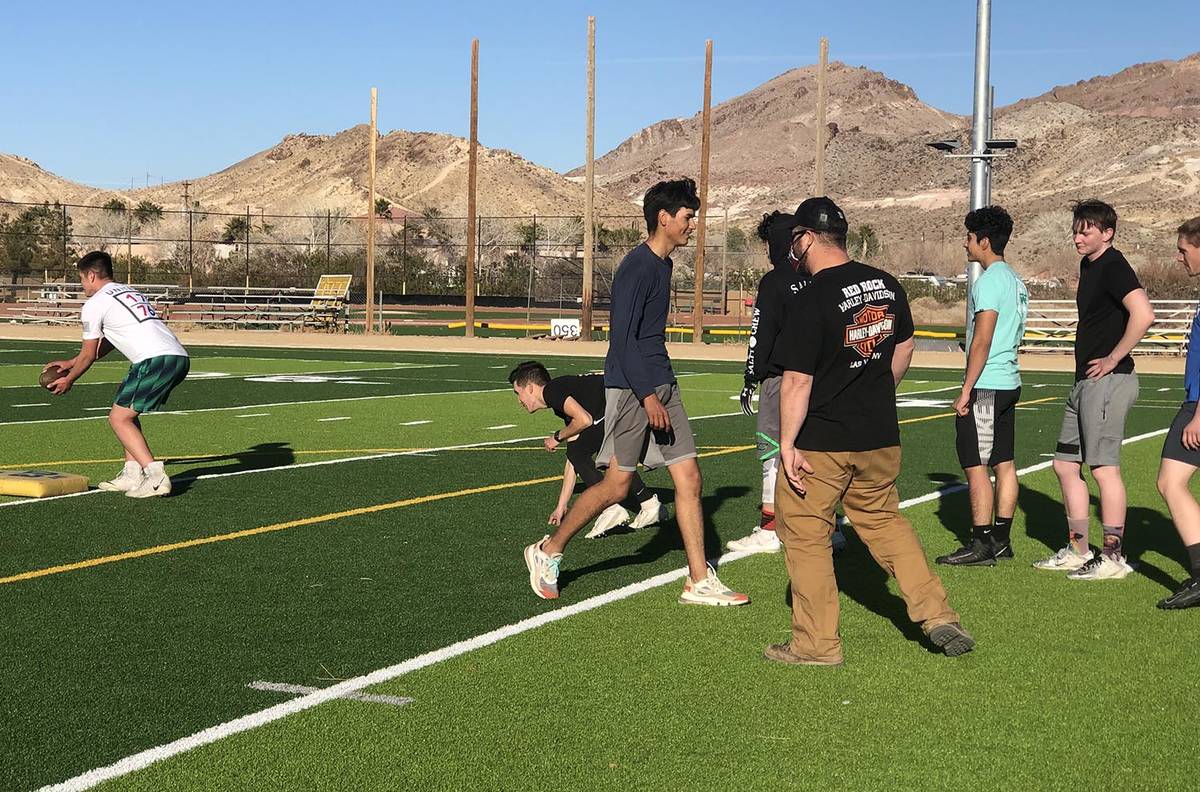 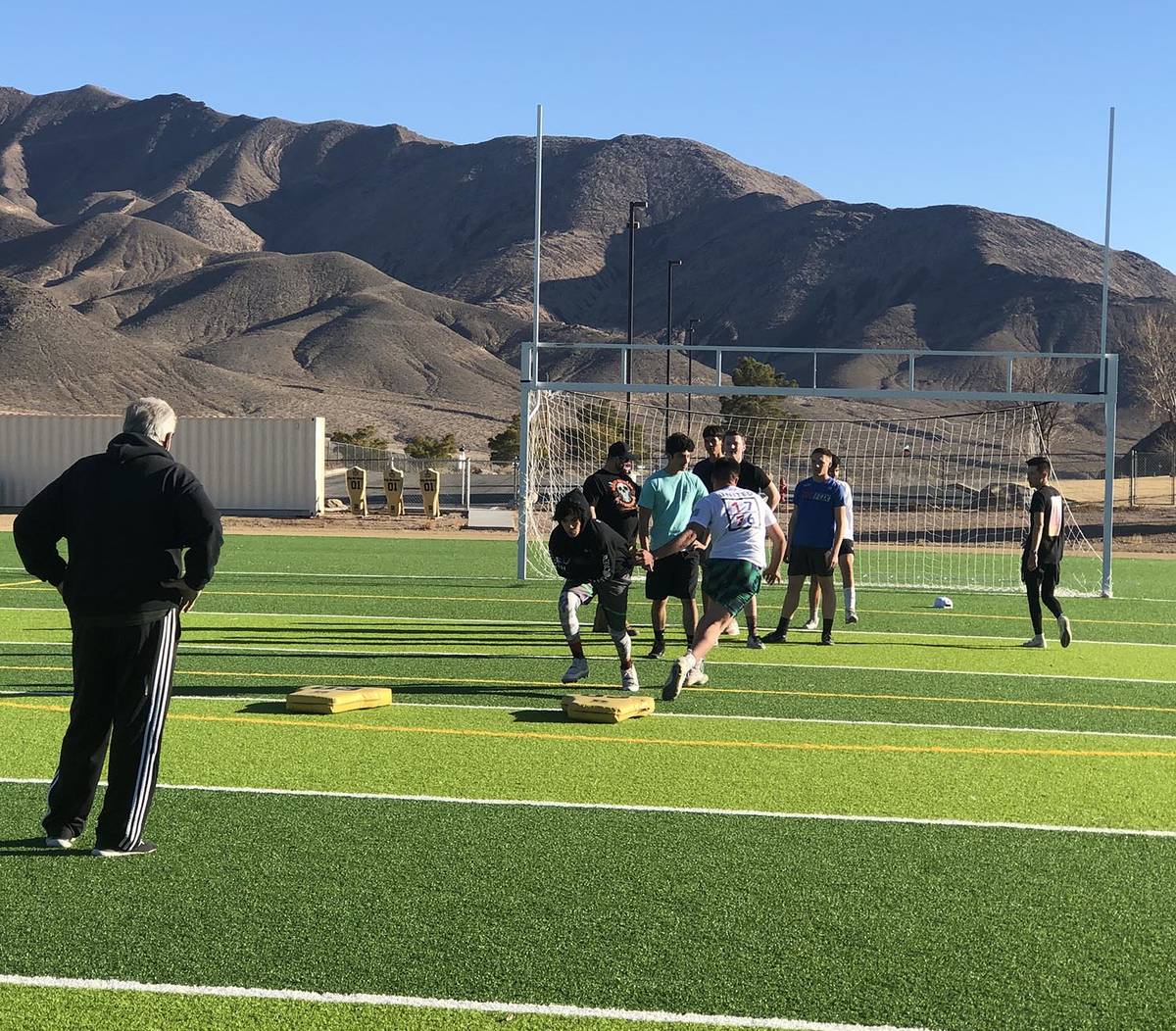 Tom Rysinski/Pahrump Valley Times Beatty High School football players didn't know there would be a season during this January workout at the school, but they know now they will be playing flag football during the "fall" sports season.

“We had practice Monday (Feb. 15) with the intention of playing tackle,” the Beatty High School football coach and athletic director said. “Then everything was up in the air, so we did not practice Tuesday or Wednesday. Then everything kind of got put back, and the next morning we talked with Kyle.”

That would be Nye County School District Associate Superintendent Kyle Lindberg, who on Thursday morning met with officials from the district’s three Class 1A schools: Beatty, Round Mountain and Tonopah. First it was athletic directors Verzilli, Ryan Saladino of Round Mountain and Steve Stringer of Tonopah. Then it was the schools’ principals. After that, it was decided that the “remote rurals” would play flag football in the upcoming season.

“We practiced Thursday still not really knowing tackle or flag,” Verzilli said. “Then after practice I talked to Kyle and just decided there was no way we could get enough help to do what needs to be done — locker room size, people to take temperatures and log it and send it to the state consistently for five or six weeks. There are times I can’t get a chain gang, so I know we won’t be able to meet all of the qualifications.”

Verzilli and Saladino each went into the morning meeting ready to play tackle or flag, while Stringer said the Muckers had zero interest in playing flag football. When the decision came down that the 1A schools would play flag football, Verzilli was all right with it.

“We planned on playing tackle football until all of the regulations came in,” he said. “After I heard everything that was required to play tackle football, it would be nearly impossible for us to do it. It’s going to be hard for anyone to do it.”

But that same day came a revised letter from Lindberg.

In fact, Tonopah football coach Duffy Otteson was adamantly opposed to flag football, and Stringer stressed to Lindberg that his school already had taken some of the steps needed to make tackle football a reality.

“I don’t think he thought we were as far ahead into the planning as we were,” Stringer said. “One of the things he asked was, do you even have a schedule? And I said yeah. Have your coaches produced their negative results so you can start practice? Yeah, we’re good there. I sent him the coaches’ negative COVID tests. I think maybe he was under the impression that we weren’t ready.

“The schedule has been set for a few weeks now, that’s why it was kind of a slap in the face. Tonopah is ready to go.”

Weekly COVID-19 testing will be required for tackle football. Verzilli noted that a larger school would be testing players just about every day to accommodate everyone, and Saladino posed a serious concern.

“They have to be tested some time during the week of competition,” Verzilli said, and if a single player tests positive, “now you all have to go into quarantine for 10 days. This whole thing is insane.”

Verzilli said Beatty would have a difficult time meeting all of the requirements for playing tackle football.

“Overly cautious,” was how Verzilli characterized the protocols. “Social distancing and masking and temperature checks would have been enough. I explained it to people that if you had a 12-inch ruler, and the first inch is you get to play tackle football, then the other 11 inches are all of the regulations.”

And even a slight slip would have major repercussions.

“The sanction for not meeting the qualifications is you’re disqualified from competing next year,” Verzilli said. “I’m not taking that chance.”

All of this has Verzilli warning his counterparts around the state.

“Anybody that is dead-set on playing tackle football is going to be disappointed,” he said. “If they don’t fall out, somebody else might. They might practice and practice and then play two games.”

Saladino was preparing for the possibility of flag football before the governor’s announcement, just in case.

“Before we had the ability to tackle, I tried to put this together weeks ago,” he said. “Then it just kind of came to fruition when tackle was announced.

“I’d love to play tackle, but I just want to play football. That’s all that matters.”

At a program that had to cancel its 2019 season because of a lack of numbers, the perspective is a little different. Over at Beatty, Verzilli said a year of flag football might help generate more interest in the sport. Between the novelty of it and the decreased risk of injury, he might be right.

“I think more will come out and play,” he said. “My kids are excited. They are truly excited about playing flag football.”

While no Nevada schools enter the season with an established boys flag football team, Verzilli said he has found some interest, so it might not be six weeks of Beatty and Round Mountain trading home games.

“Coleville sounds like they’ll do it,” he said. “And I talked to Mountain View Christian, who canceled their tackle football because of all of the bureaucracy, and their AD is excited.”

One thing everyone agrees upon is that the NIAA — which will not be involved in flag football — has done its job as well as possible throughout the pandemic.

“The NIAA has bent over backward to get us sports,” Saladino said. “They’ve worked so hard to provide, and it’s awesome.”

“The NIAA has been breaking their back to satisfy the governor to let us play football,” Verzilli agreed. “They have gone above and beyond to do everything they can possibly do to get us back in the gyms and on the field. The NIAA had to jump through so many hoops, which they accepted to get these kids playing. I’m really pleased with the effort from the NIAA.”

Actually, there is another common thread.

“In the end, the kids absolutely need to have some kind of activity,” Stringer said. “It’s depressing for them not to have sports. A lot of kids are struggling right now. They haven’t had sports, they haven’t had dances, something has to give.”