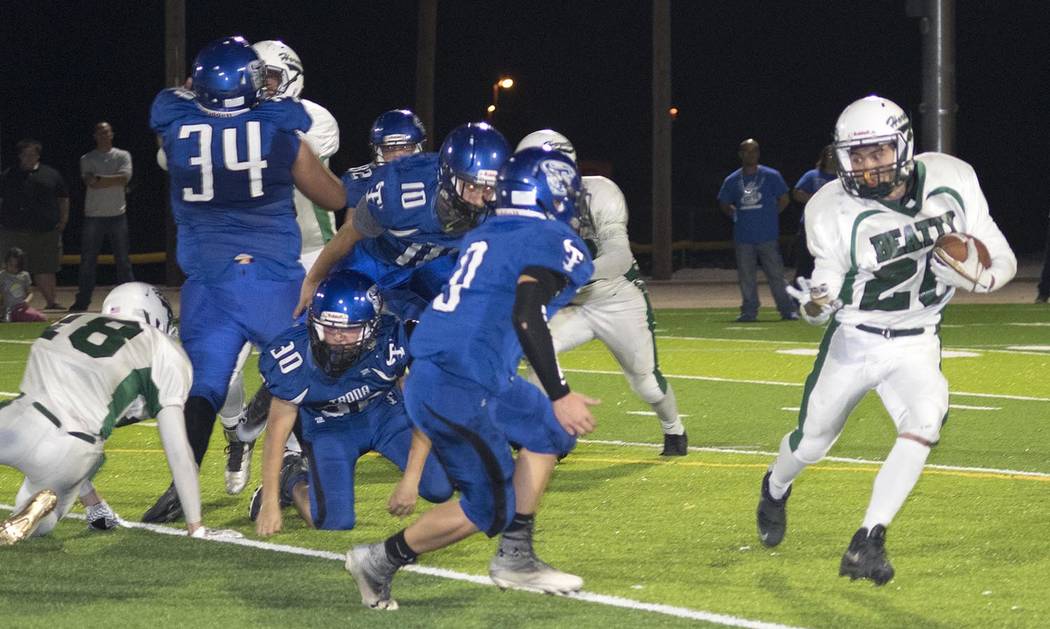 Richard Stephens/Special to the Pahrump Valley Times Senior running back Alan Sandoval looks for running room during Beatty's victory over Trona on Sept. 7 in Beatty. 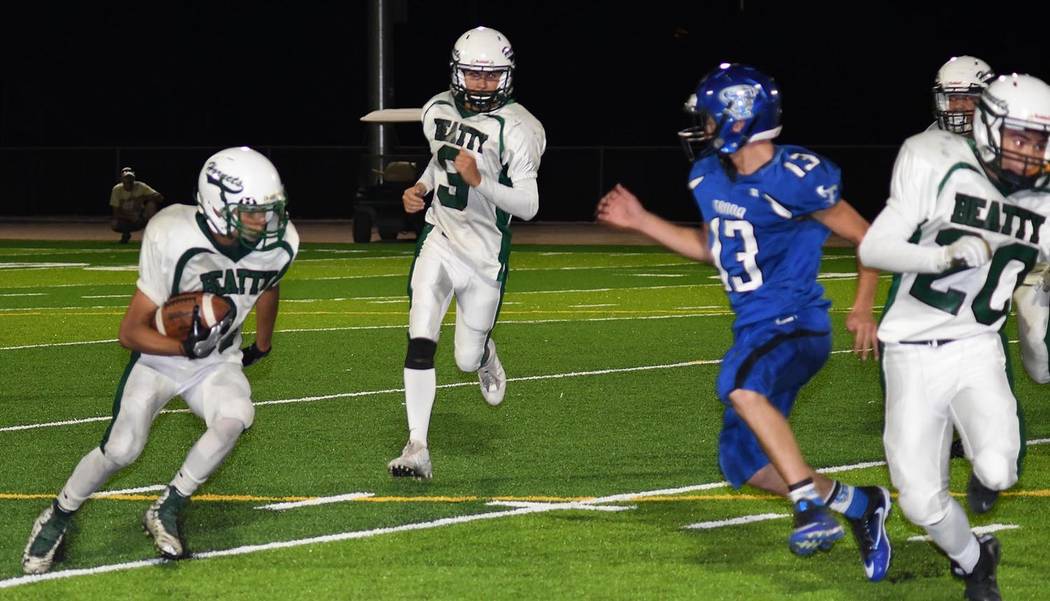 Richard Stephens/Special to the Pahrump Valley Times Beatty senior Yadir Rodriguez, shown carrying the ball Sept. 7 against Trona, is out for the season because of injuries suffered in a motorcycle accident.

It wasn’t much of a contest Thursday night as the Beatty High School football team jumped all over Mountain View Christian and rolled to a 30-0 victory in Beatty.

Junior running back Fabian Perez scored three times, and sophomore quarterback Braden Lynn scored once. Lynn was playing in place of senior Jacob Henry, who was out with a bruised thigh.

“It was 30-0 in the first quarter,” Beatty coach Leo Verzilli said. “The best thing about that game is we played our second team. Everybody got to play. We played a full second team on offense for three quarters of the game. On defense, we played our first team but then we sprinkled in three or four kids on defense.”

The Hornets spread around the 2-point conversions, with Lynn running for one, Alan Sandoval running for another and Max Taylor catching a pass for a third.

The game was scheduled late, as Sandy Valley was originally penciled in for last week. But the Sidewinders are not able to field a team again this year, and Verzilli was able to set up a game with the Saints, who went winless the past two seasons in the Class 2A Southern League and are playing an independent schedule this season.

Verzilli was pleased with the play of his backups and enjoyed getting them a chance to play in a game.

“They didn’t score any more, but they didn’t make any massive mistakes, and they didn’t do anything to hurt themselves,” he said. “Lynn handled the ball well and did everything we always do. … He did well with the varsity, and he did a good job with the JV players.”

The Hornets were short-handed, as not only was Henry out with a relatively minor injury, but senior Yadir Rodriguez is out as well.

“Our starting safety and starting running back, Yadir Rodriguez, was in a motorcycle accident, so we lost him for the rest of the year,” Verzilli said. “He’s messed up, but he’ll be OK. He’ll be in the hospital for a week to 10 days.

“Henry will be back this week. We’ll have to make a couple of moves to fill in for Yadir.”

Rodriguez’s value to the Hornets can be gleaned from a quick look at last year’s statistics. He was the team’s second-leading rusher with 326 yards and five touchdowns and its second-leading receiver with 79 yards and two scores. On defense, Rodriguez came up with nine of Beatty’s 17 interceptions and was fourth on the team in tackles with 32.

And the Hornets will need everybody else at full strength tonight when what is annually their toughest test on the schedule comes up: longtime powerhouse Pahranagat Valley, this year on the road in Alamo.

“Seems like every time we go to play Alamo something happens to somebody,” Verzilli said.

The Panthers are not a team that loses much against anyone, much less a team missing a key player. Pahranagat Valley is well known for its national eight-man record 104-game winning streak, which ended in the 2016 Class 1A championship against Spring Mountain.

The Panthers responded by starting a new streak, which is now at 14 and includes two wins against Spring Mountain, the second a 68-18 thrashing in last year’s 1A championship game.

“They do everything well,” Verzilli said. “They are coached up, and those kids — in football, basketball, everything — they listen and do exactly what they’re told to do. They don’t try to do more, and they don’t do less. It’s a joy watching them play.

“I’m sitting here breaking down film, and I’m just saying to myself, ‘Whoever drew up that play, that’s a perfect play.’ Their blocking is good, their tackling is solid, their running backs all run hard, and it’s not just their starters. Their second team is just as good. They have a good Pop Warner program, a good middle school program and a good high school program. They just play sound football.”

But while Pahranagat Valley will be the Hornets’ biggest test, the same is true in reverse, at least early in the season. The Panthers have beaten Independence, which has been outscored by 100 points in two games, and Beaver Dam, which counts Mountain View Christian, the same team the Hornets toyed with last week, as one of its two wins.

There will be no toying with the Panthers.

“You can’t make mistakes against them,” Verzilli said. “You have to play hard for four quarters against them. You’ve got to play every play.

“It’s not like they’re doing something crazy. It’s just sound football. They do a great job.”

Verzilli said Pahranagat Valley’s long tradition is maintained partially because of family ties. Players today are the sons and grandsons of former players, and the desire to live up to past standards is very strong in Alamo, a town of just more than 1,000 people.

“It runs deep,” Verzilli acknowledged. “It’s the same names that were there 40 years ago. There’s personal pride in what they’re doing. We’ll go up there. We’ve got to make a couple of changes, but hopefully, we’ll go up there and make a good showing. They’re not robots, they’re beatable.

“They still are 15-and 16-year-old kids. You can’t get wrapped up in what they’ve done or the persona that precedes them. We have to just go and play our football, some hard-nosed football. We can beat them, we just can’t be sloppy. We just have to have a good game.”