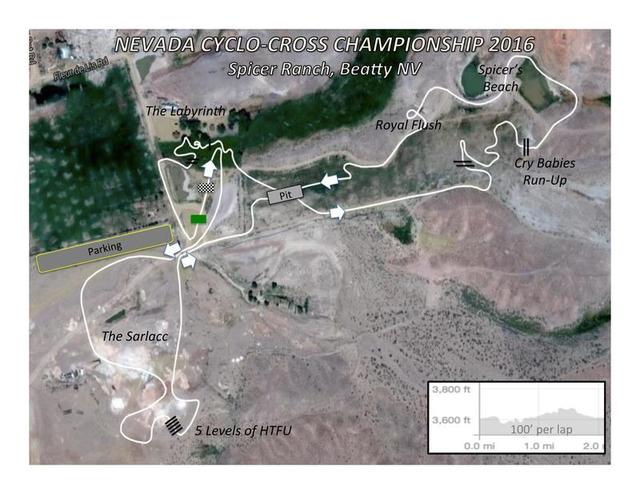 Special to the Pahrump Valley Times The official 2.1 mile cyclocross course at Spicer Ranch. The event will be Sunday, Nov. 27 at 8 a.m. 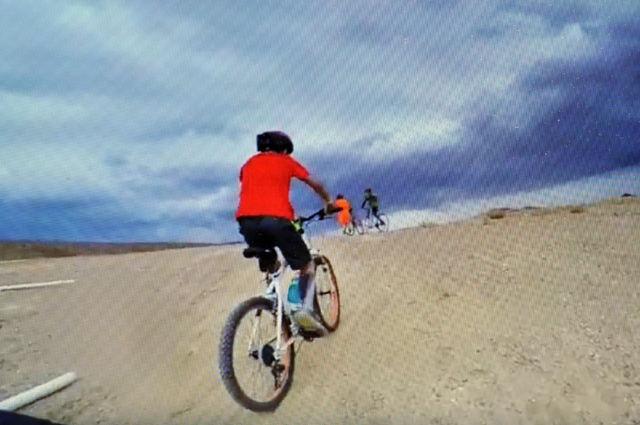 Special to the Pahrump Valley Times Steve Clausse had to design the course with the help of Cimarron Chacon of Gro Promotions. Then the course had to be tested. A lone rider tests the course. 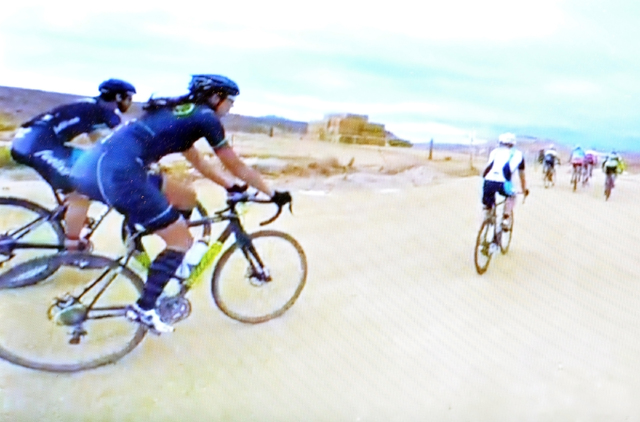 Special to the Pahrump Valley Times Above, riders test the course at Spicer Ranch for the Nevada Cyclocross State Championship race on Nov. 27. Steve Clausse developed all kinds of obstacles for the race, like a sand pit and bridge. The official 2.1 mile cyclocross course is at Spicer Ranch. The event will begin at 8 a.m.

Cyclocross is coming to Beatty on November 27 at Spicer Ranch for the Nevada Cyclocross State Championship.

The event is a combined effort by Cimarron Chacon of Gro Promotions, Dave Spicer of Spicer Ranch and Steve Clausse of Las Vegas Cyclery. The race venue at Spicer Ranch in Beatty will include a vendor expo, local businesses, great food and drinks.

Clausse, a former Belgian professional road biker from the 90’s, lives and breathes the sport and believes in it and has been promoting it.

Chacon and the Las Vegas Cycling Club designed the course. Chacon has five years experience designing Cyclocross courses and years more designing trails. She has been instrumental in building the trails in Beatty that Dave Spicer has been working on.

The event will take place on Spicer’s Ranch, which is four miles north of the town. The ranch has been the center of the new mountain biking trails that will eventually surround the town of Beatty.

Cyclocross is a growing sport in America and Spicer hopes events like this one will draw bike riders to Beatty.

This event is the only spectator-friendly hybrid sport where professional road cyclists and professional mountain bikers compete against each other on an aggressive course consisting of man-made and natural obstacles.

Clausse said it was spectator-friendly because the riders pass by the fans at least 10 times in the race.

He expects upward of 100 riders for this event.

“Riders will be coming from all over Nevada,” he said. “People should be staying in Beatty because it’s too cold to be camping out at the ranch.”

Cyclocross is the fastest-growing segment of the cycling industry and its growth in Nevada is equally as impressive.

“I have been working with Coby Rowe (Reno cyclist) in Reno to help engage the southern and northern athletes,” Clausse said. “This race will be a separate competition from the Northern California Nevada Cycling Association or Southern California Nevada Cycling Association district championships and allows Nevada cyclists a chance to compete against each other. The state of Nevada is geographically massive and we don’t often ride against each other for that reason. A state championship that takes place in the north and south each year is a great solution.”

Clausse said the competition is for all ages.

The sport was developed in Europe in the early 1900s as a way for road racers to remain fit during fall and winter.

A typical course runs around 1-2 miles, and the race could last an hour. This course will be 2.1 miles. The terrain is varied and includes hills, grass, pavement and some dirt. An interesting aspect is that most courses require cyclists to overcome obstacles that require them to dismount their bikes and carry them through the obstacles.

“I have been coming up to Beatty a lot to work on the course,” Clausse said. “We will have steps, a bridge some grass areas, and even a sand pit that we called “Spicer’s Beach”.

Clausse said he is still trying to get more riders to sign up.

“We have a great amount of bike companies who gave us prizes for the podium winner of the state championship,” he said.

“I’m hoping to get mountain bikers to sign up as well and get their feet wet,” Clausse said.