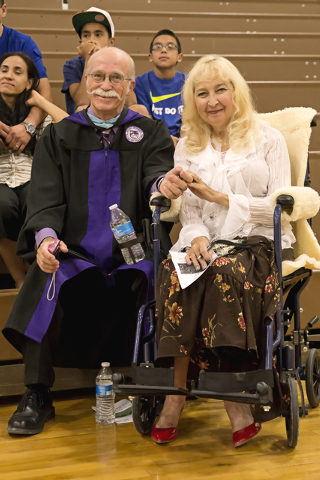 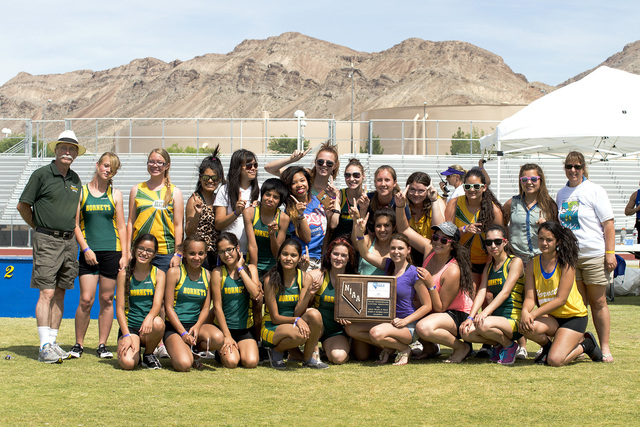 In those years, he has coached many sports such as football and basketball, but his first love has always been track and field.

The recent illness of his wife Connie and the strain of coaching has taken a toll on him. His wife has been in and out of the hospital for some time with a rare blood disorder and he feels it’s time to hang up the track shoes.

“There are lots of reasons for giving up track and one of them is the financing. The financing is so tenuous. By the time track rolls around so much of the financing has gone to other sports. This has bothered me for all the years I have coached in Beatty,” Adcox explained.

He said football officials are paid by the district. This is the case with basketball, volleyball, baseball, softball and wrestling. Everything is paid, but when track rolls around you have to pay entry fees and that comes out of whatever money track has. If you don’t have money for it, you don’t go. Sometimes there is no money available.

A big worry for him this year was the lack of money to go to state. The team expended sums of cash to go to the district meet and the team needed to pay for meals and hotel to stay in Las Vegas. The school told him there was no money to send his team to state in Reno.

The team may not have been state champs this year, but it wasn’t for the lack of trying. The Lady Hornets crushed all their competition at the regional meet. Beatty compiled 240 points to take the Southern Regional Championship in Division IV for the fifth time in a row. The closest school to them was Indian Springs with 88 points.

This year the drama was intense with the injury of Ruth Pimentel, a senior long distance runner who got injured. Pimentel and her sister Zuri had been tearing up the long distance in Division IV for the past two years. Earlier in the year Adcox said Ruth injured her quadriceps. It never healed, but she was able to run on it most of the season in pain and she was a driving force that got the Hornets to state. Just before the district meet she injured it again.

“This was devastating to our team,” Adcox said. “She got hurt so bad the week before district that I had to tell her she was done. I would not even let her practice and told her the season was over. I told her, ‘You have done so much in your four years of track. You will have to rest on those laurels. I am not going to let you tear yourself up in district and state.’ The points are not worth it and the first place trophy is not worth it. She could have damaged it maybe for the rest of her life.”

Ruth, for her courageous efforts this year was given an opportunity to say goodbye to her coach.

“The team was devastated because he was there so long and everything has its time. There are other important things in life. We are going to miss him,” Ruth said.

When asked if it was hard to accept his decision, Ruth said, “It was hard because not only is he a great coach, but he is a great person. Over the past years we were together he became a good friend. This last season was hard because of my injury and his retirement. It was a shock to have both happen.”

Her best memory with her coach was last year because they won the state championship.

“This year seemed rushed and it was sad and it all came to an end too soon,” she said.

Ruth described her coach as a caring person, a wonderful human being, coach and teacher. She said he was a great man because he actually cared about the students he coached.

“He was a life mentor. I could sit down and talk with him about everything that was going on in my life,” she said.

Ruth had to watch from the stands, but the team went on to state and came within 10 points of winning the title. They finished second.

Adcox said even though they did not win, the team had heart and it will be one of his fondest memories.

“That state championship will be big in our memories. I have won it in Oregon, but this one last year was big because no one expected it. This year was the biggest thing because this was my last team. I coached in much bigger schools in other states — it’s dying and going to heaven to come to Beatty. It’s the quality of kids you deal with,” the coach said.

Track is one of those sports where improvement of individual athletes stands out more than other sports.

“I am going to miss the excitement and the mental exercise of planning who is going to go where, who will just fill the slots and the enthusiasm the kids have. They give you more memories than you give them. The excitement and thrill of watching kids go from being brand new in a sport they have never done and suddenly they see they can do it,” he said.

A perfect example of this was Jessica Eastman. He said he tried for four years to get her out for track and finally her senior year she came out. This year she became a great sprinter. She won a gold at district and a silver at state in the 4×100 relay. He said if she had started as a freshman she could have been an individual state champ.

“Watching her change and the excitement and enthusiasm that developed over the year was great. I will also miss the kids that come in dead last and they still improved. I am going to miss it all. I am proud of what they did this year. I counted all the girls district and state track trophies in the history of Beatty High School and there were 13 of them. Twelve of those trophies were won in the last five years. That is awesome. Eight of the trophies came from the seniors that graduated and this is in its entire history,” he concluded.

Adcox will remain a teacher at Beatty High School for a few more years.