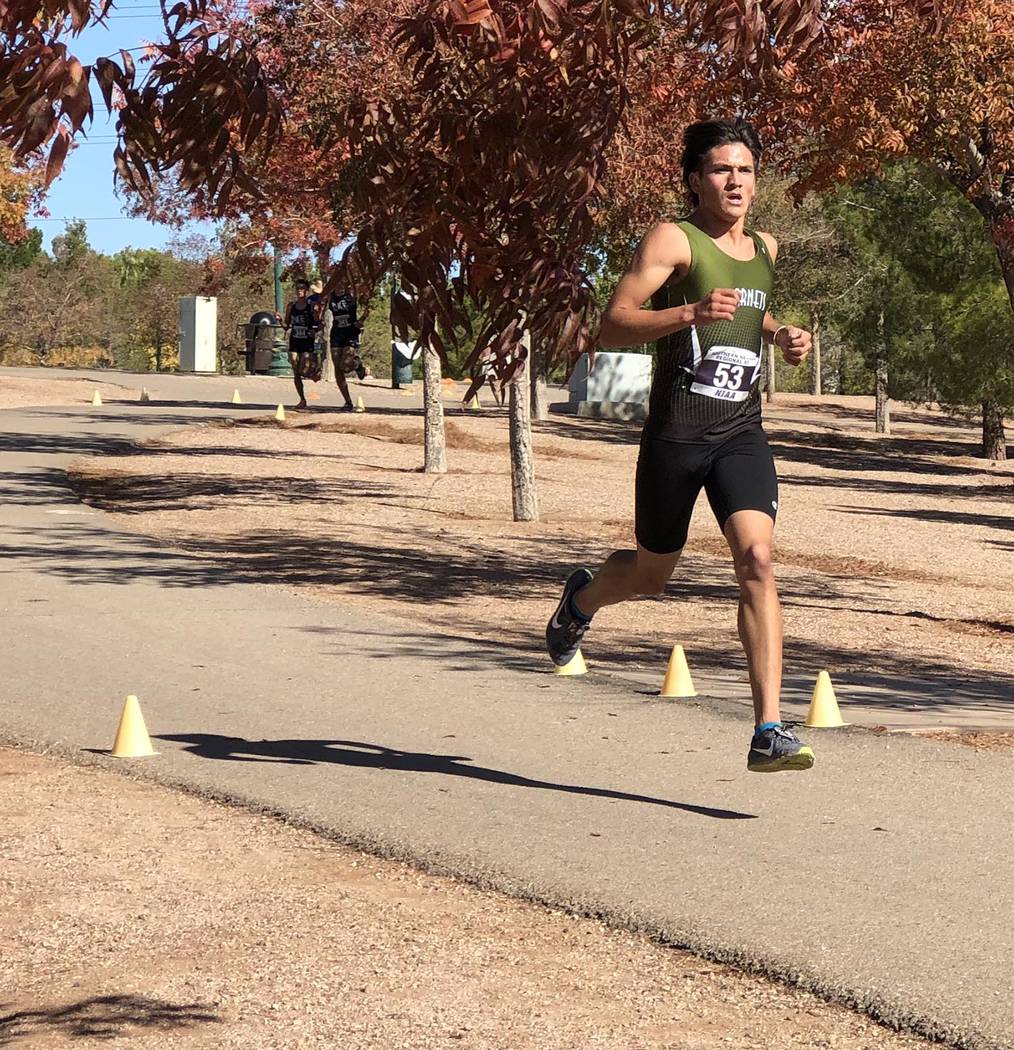 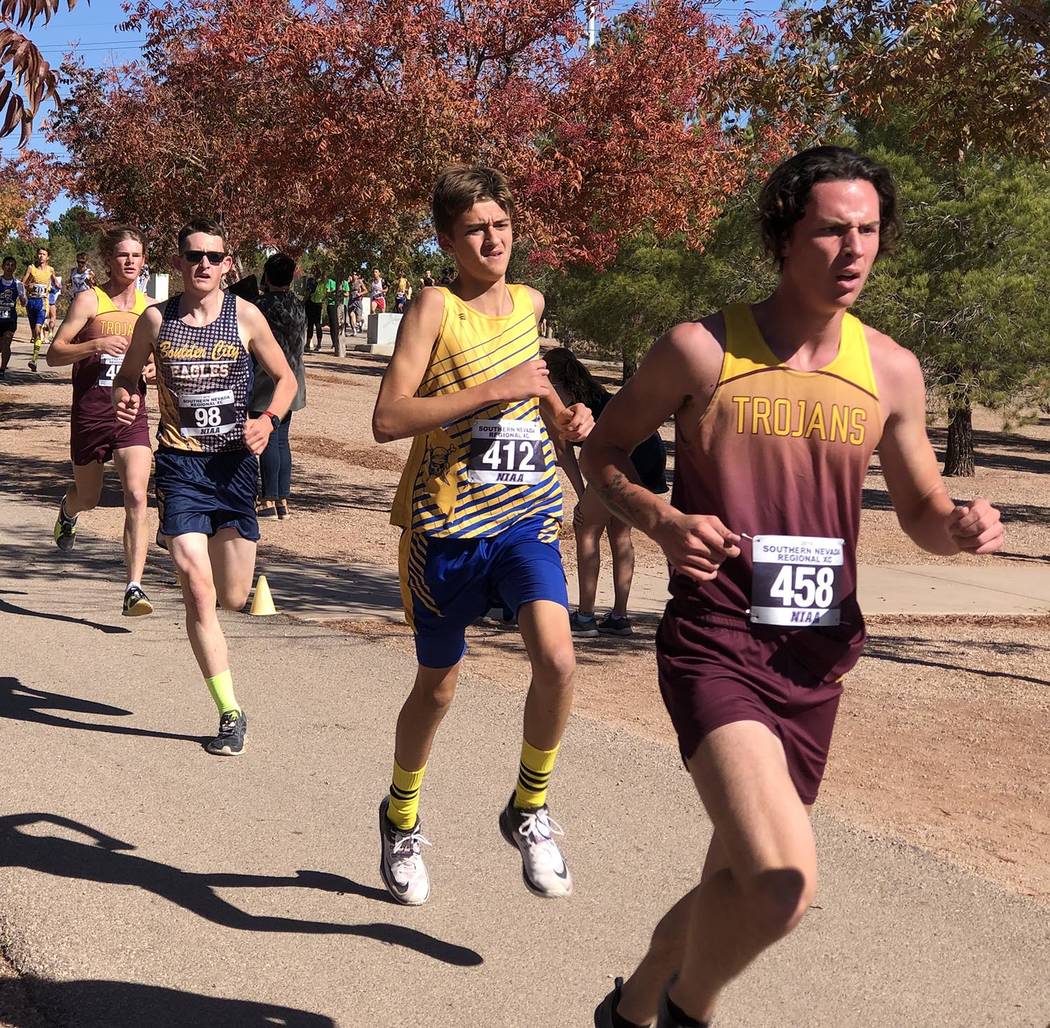 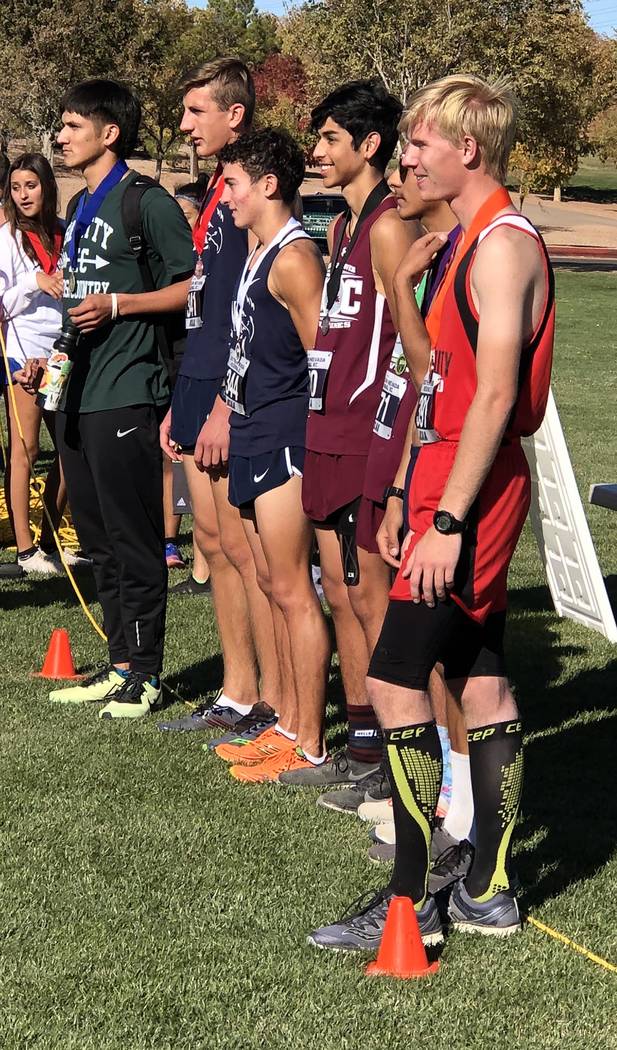 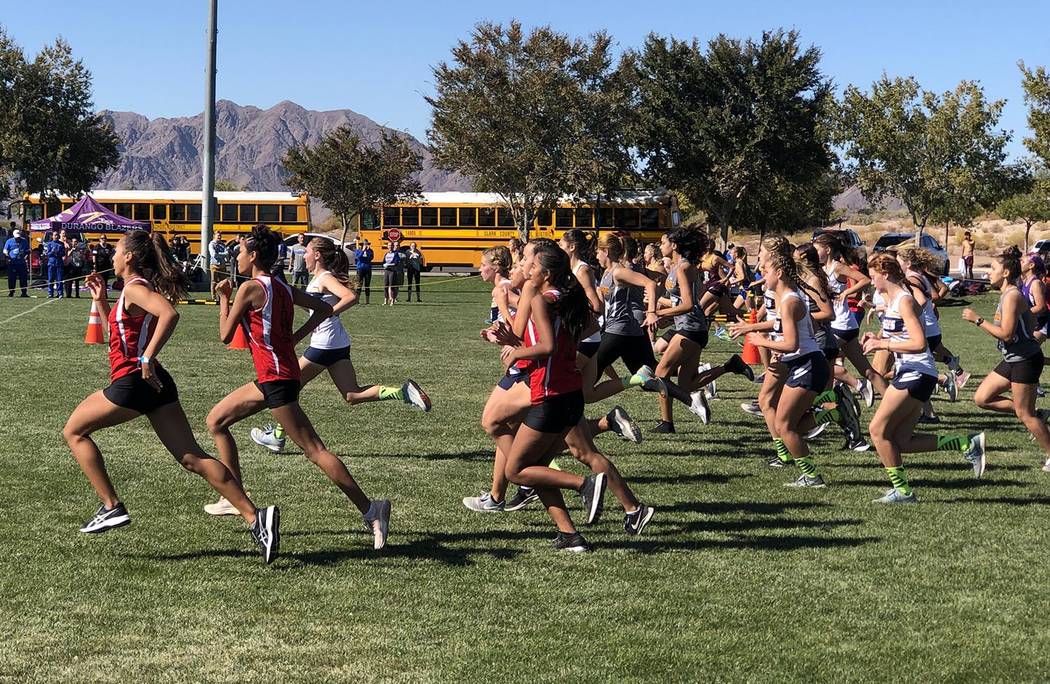 Tom Rysinski/Pahrump Valley Times The 3A Girls race gets underway during the Southern Regional Cross Country Championships on Saturday in Boulder City. 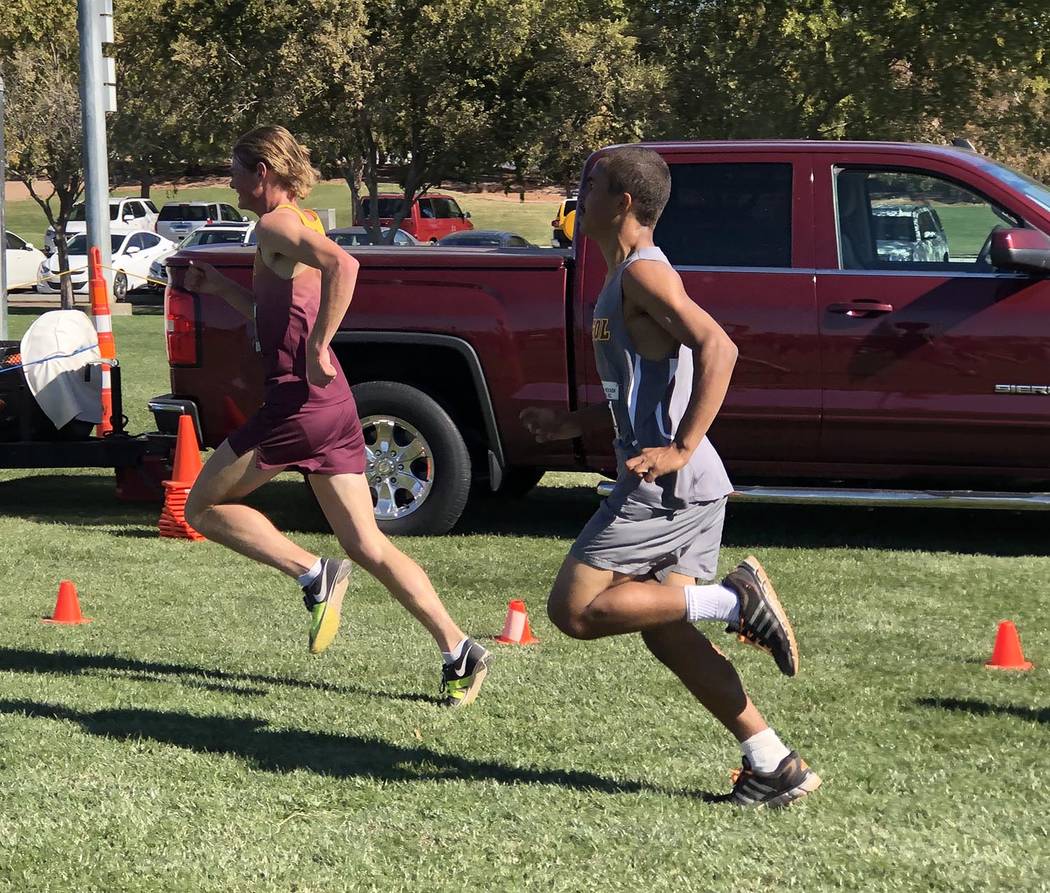 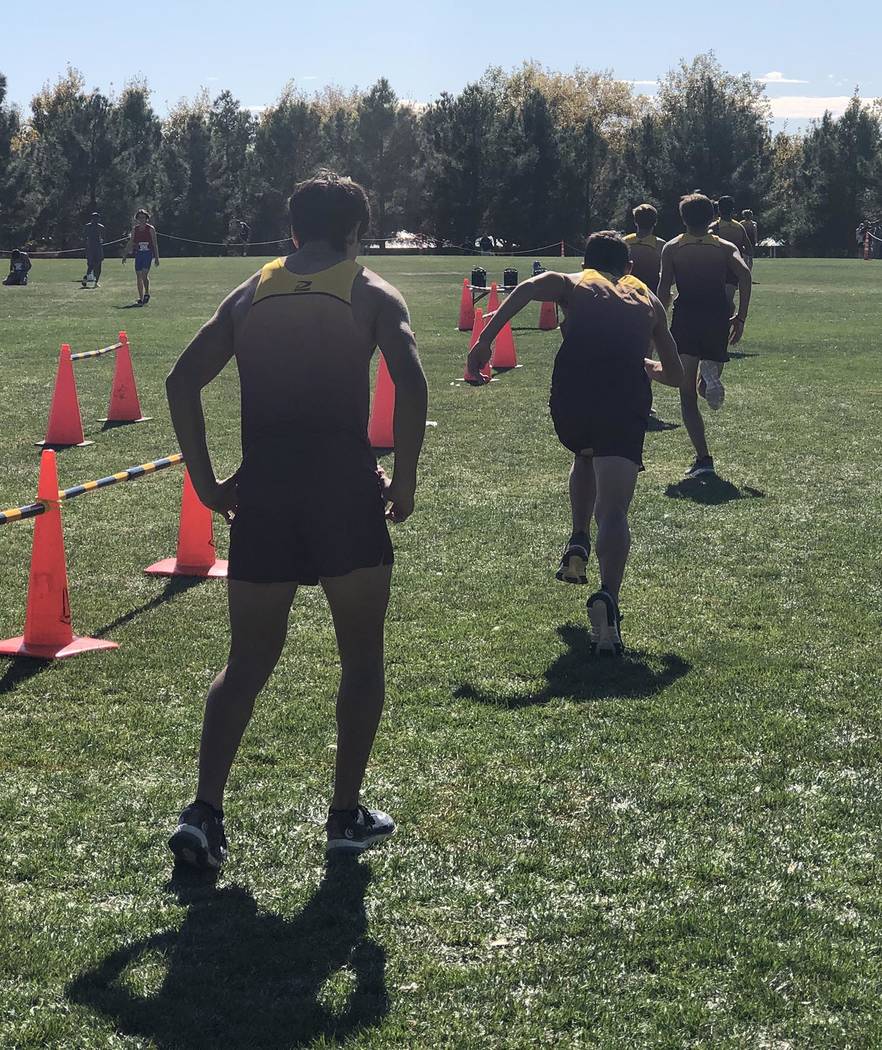 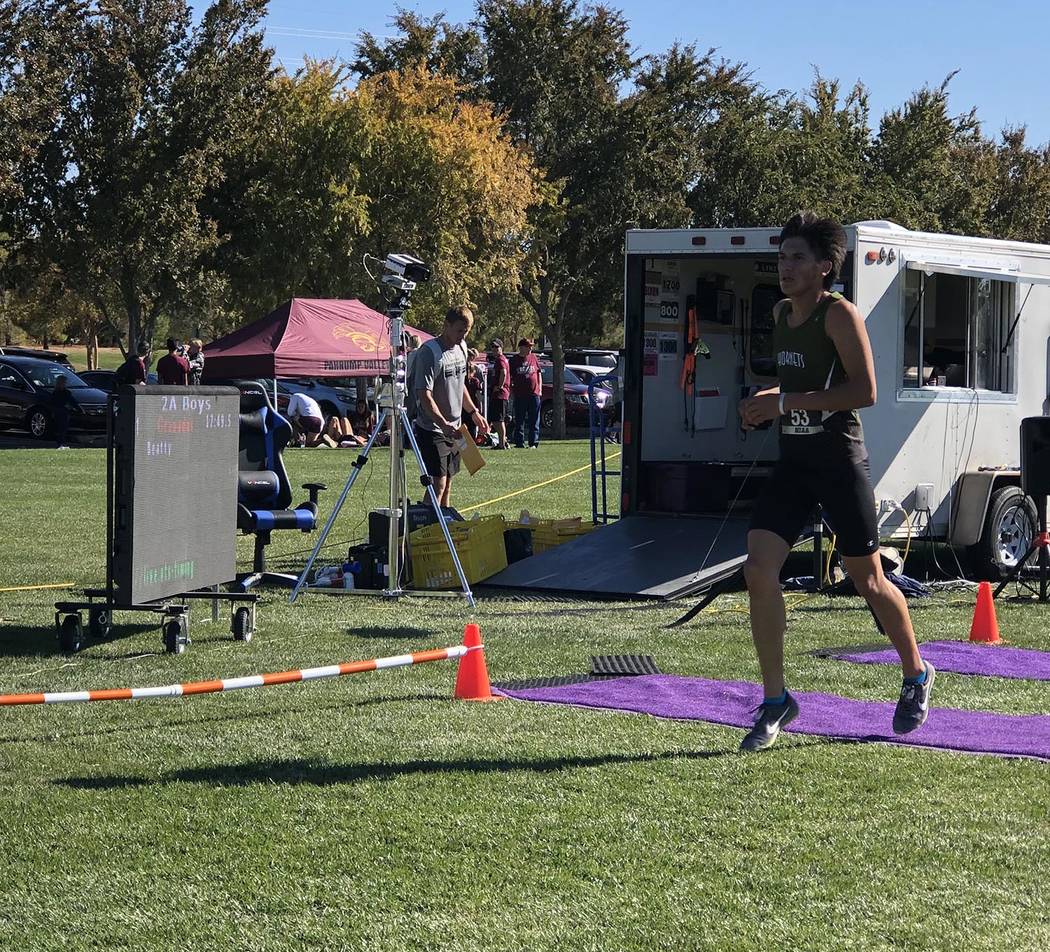 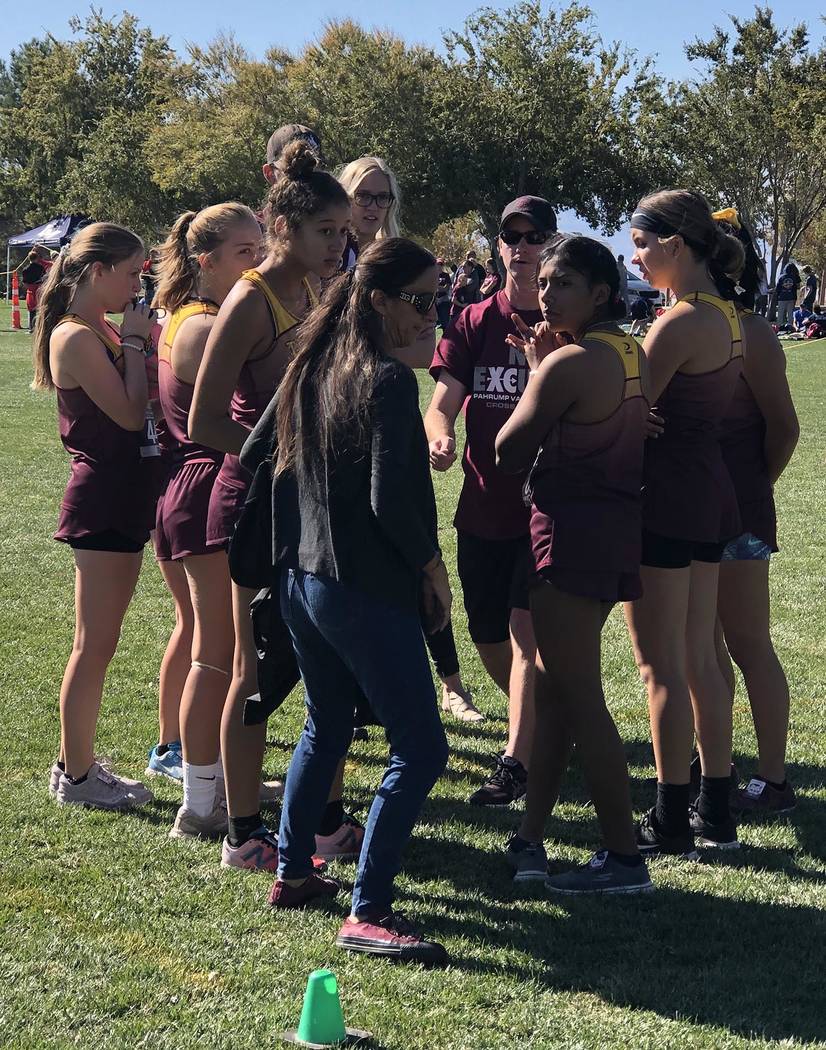 Beatty senior Jose Granados had just finished winning the Class 2A/1A race at the Southern Region Championships at Veterans Memorial Park in Boulder City, and all he could do was talk about what a terrible race he ran.

That “horrible” performance beat Lake Mead Christian freshman Johanan Jackson by 15 seconds, topped third-place finisher junior Josiah Sohus of Lake Mead Christian by almost 1:20 and the rest of the field by nearly 2 minutes, running the race exactly according to plan.

“Get away from everybody else and run my own race,” Granados said of his strategy, which worked on the challenging course. “It was tough. Same as always.”

Then there was Pahrump Valley senior Grant Odegard, who qualified for this week’s state championship meet in Reno by finishing eighth overall with a time of 18:34.6. But he was far from happy.

“I definitely hoped to do better than that,” Odegard said. “Top five should have been where I was.”

Odegard also had a strategy going into the race.

“I was just going to try and stick on Preston (Humes) from Moapa, but he ended up getting away from me,” Odegard said.

Both boys, state qualifiers, said they were not at their peak Saturday.

“I wasn’t feeling too good when I was running,” Odegard acknowledged, citing “end-of-season tiredness.”

“A little hip pain, probably the third week with it,” Granados said. “Whenever I’m running I feel it a little bit, but when I’m done it hurts.”

The state championships will be held Saturday at Rancho San Rafael Park in Reno, and Odegard will not be going alone.

“We’re taking two sophomores to state as individuals on the girls side, so that will be something they can build on,” Pahrump Valley coach Erik Odegard said.

The top seven individuals whose teams did not finish among the top three advanced, and with team champion Moapa Valley, second-place Boulder City and third-place Valley dominating with 11 of the top 14 runners, there was room for Arianna Hamilton in 15th and Hillary Valencia Vidales in 20th to make it to Reno.

Hamilton finished the course in 24:54.4, while Valencia Vidales ran it in 25:31.4. They were not the only young runners in the field for Pahrump Valley on Saturday, as four sophomores placed in the top 50.

“Some of our kids, especially on the girls side, are young. We had a lot of young kids this year,” Erik Odegard said. “They’ve got some ideas. They know where they’re at now and what we’ve got to do for next year.”

“I am excited for our two girls to get a taste of the state meet this year. It should give them a good understanding what it will take to be where they want to be for next year.”

On the boys side, Pahrump Valley senior Brandon Ruud started strong, and Erik Odegard said that might have been a case of trying to do too much.

“I think Brandon felt he needed to move up also and went out and ran his race differently than he normally does,” the coach said. “He tried to match the front group to put himself in a position to finish higher than normal, but it seems like he pushed too hard at the start and just didn’t have what he was hoping for to finish.”

The Trojans boys would have had to run a near-perfect race to finish among the top three teams and advance to the state meet as a unit.

“After the last couple of meets our boys were going to have to do some things, but Del Sol seemed to be in reach,” Erik Odegard said. “How to position ourselves was going to be the challenge. We knew that we … were going to have to attach themselves at the start of the race with the No. 5 runner from Moapa, and this was going to give them all a new PR on the hardest course they ran on to have a chance as a team.”

Granados, who ran solo last year, had some company this time, and the other Hornets fared pretty well. Junior Alfonso Sandoval finished 16th in the 48-runner field in 21:20.6, while sophomore Jovan Oseguera was close behind in 18th in 21:23.0. Sandoval was just two places short of joining Granados at the state meet.

But with the scene shifting to Reno this weekend, everyone will be on unfamiliar ground.

“I never ran it,” Grant Odegard said of the course at Rancho San Rafael Park. “I’ve watched my brother run it. It looks difficult, and with the added elevation it should be fun.”

“It’s going to be a surprise,” Granados added, saying he might be able to ask former rival Jared Marchegger about the course. Marchegger runs cross country at the University of Nevada, Reno, but his former teammate at Sierra Lutheran, senior Teagan Hansen, won the Northern Region title on the Reno course Saturday in 16:58.

As for Pahrump Valley, Erik Odegard was pleased with a season that saw many newcomers on the cross country team, many of them not freshmen.

“As a whole, I would say the season was a success,” he said. “We knew coming in that we would be rebuilding, and even though there were a lot of seniors on the team this year we found a good group to start with next year and build with.”