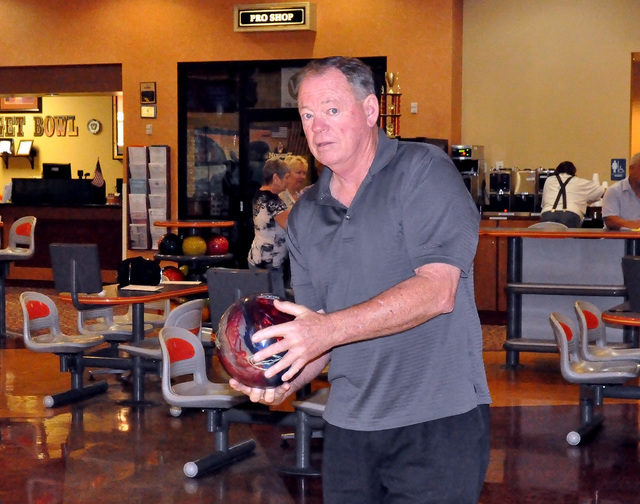 Pahrump bowler Gary Evans has a passion for the sport. He’s at the Pahrump Nugget Bowling Center almost every day. The bowler is on a mission to compete in the nationals in Reno and to bowl a perfect game.

“The competition in Reno has been on my bucket list for some time now,” Evans said.

Evans plans on bowling with a team and heading up to Reno for the United States Bowling Congress Open Championships which end on July 10.

In tournament play, bowlers have to stay calm.

“I keep myself calm by focusing myself,” he said. “I tell myself to relax and then I get into a rhythm and it all works out.”

In addition to controlling tension, bowlers must battle the different patterns in the lanes. Each bowling alley has different oil patterns made by the polish the alley uses on the lanes. This oil affects balls differently.

“Adjusting to theses patterns depends on what ball you use,” he said. “I travel with six balls. I am not sure I will be able to bring six with me to the nationals. I may not take all six because each of those balls must be weighed and comply with regulations.”

Evans compared those regulations to how NASCAR regulates the cars before each race.

The veteran bowler will be getting to Reno early so he can practice on the lanes.

“I will get there an hour early before the tournament,” Evans said. “I like to see how my ball reacts to the lane and I like to unwind before I bowl.”

The Pahrump bowler has one more thing in addition to nationals that he wants to accomplish and that is to bowl a 300 game.

“I am 62 now and still have not bowled a 300 game,” he said. “There are bowlers way younger than me that have. I don’t know what it is, nerves? I have been close umpteen times. But when it does happen I will celebrate.”

Evans has been bowling since he was 12 in junior high. He is currenly bowling with a 190 average.

“My average fluctuates from 175-210,” Evans said. “I bowl three times a week and I bowl more in the winter than the summer. I love the competitiveness aspect of the sport.”

He said he owed his love for the sport to his father.

“My father used to work at the bowling center in Fullerton, California,” Evans said. “I used to hang out there and took lessons and got hooked. I bowled in college too at Fullerton State College.”

Evans also continued to bowl while he was in the military. He served 16 years in the Army and 14 in the Air Force and bowled recreationally.

Evans said over the years he has been able to bowl with professionals.

“I learned from them to have a positive attitude,” Evans said.

He is retired and bowling is his passion. Evans has been in Pahrump for two years and loves it here.

“I take my bowling balls with me wherever I go,” the veteran bowler said. “When I go back East just to see family, my balls are with me. I have bowled in Japan, Italy and France. If there is an alley I will be there. I do have other passions like model trains, and a ‘23 roadster.”

The veteran bowler also agrees that bowling is a social sport.

“I like the people at the Nugget,” the bowler said. “It’s a great atmosphere and a good senior group.”

He said bowling was in a decline but he notices the sport is coming back.

“It’s not like the 70s,” he said. “Bowling is still in decline, but I think it’s starting to come back. Maybe if more kids came out and the Olympics did something with it.”