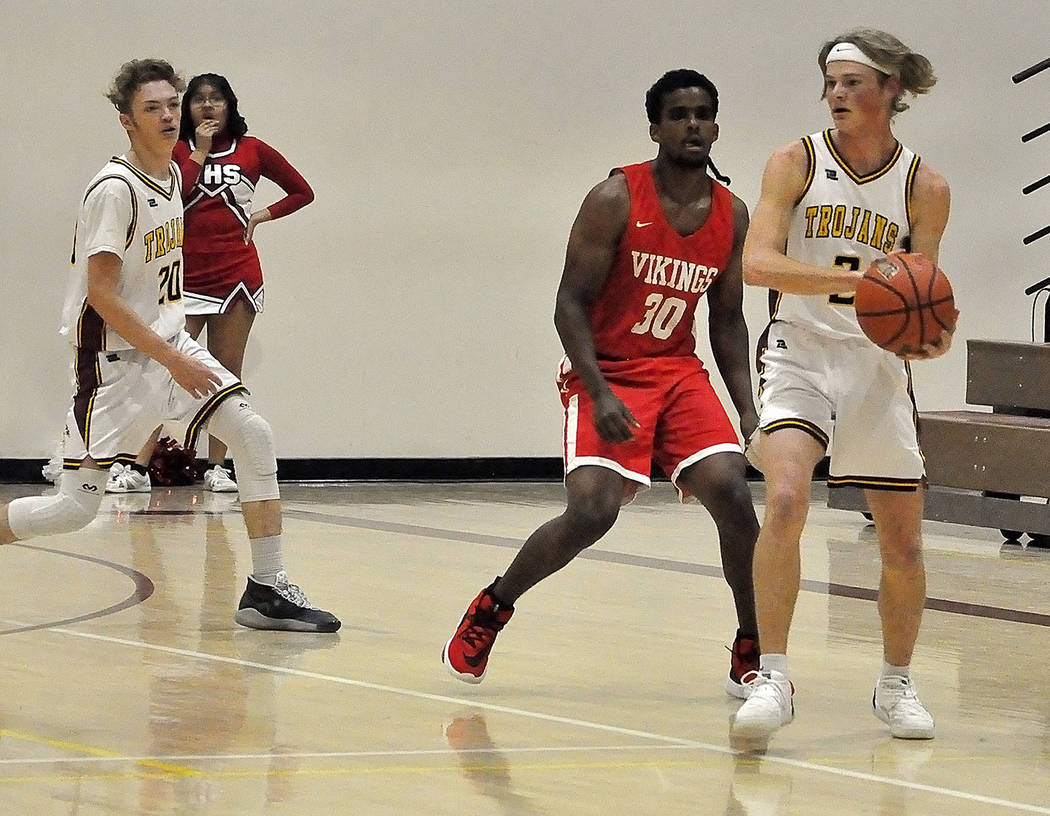 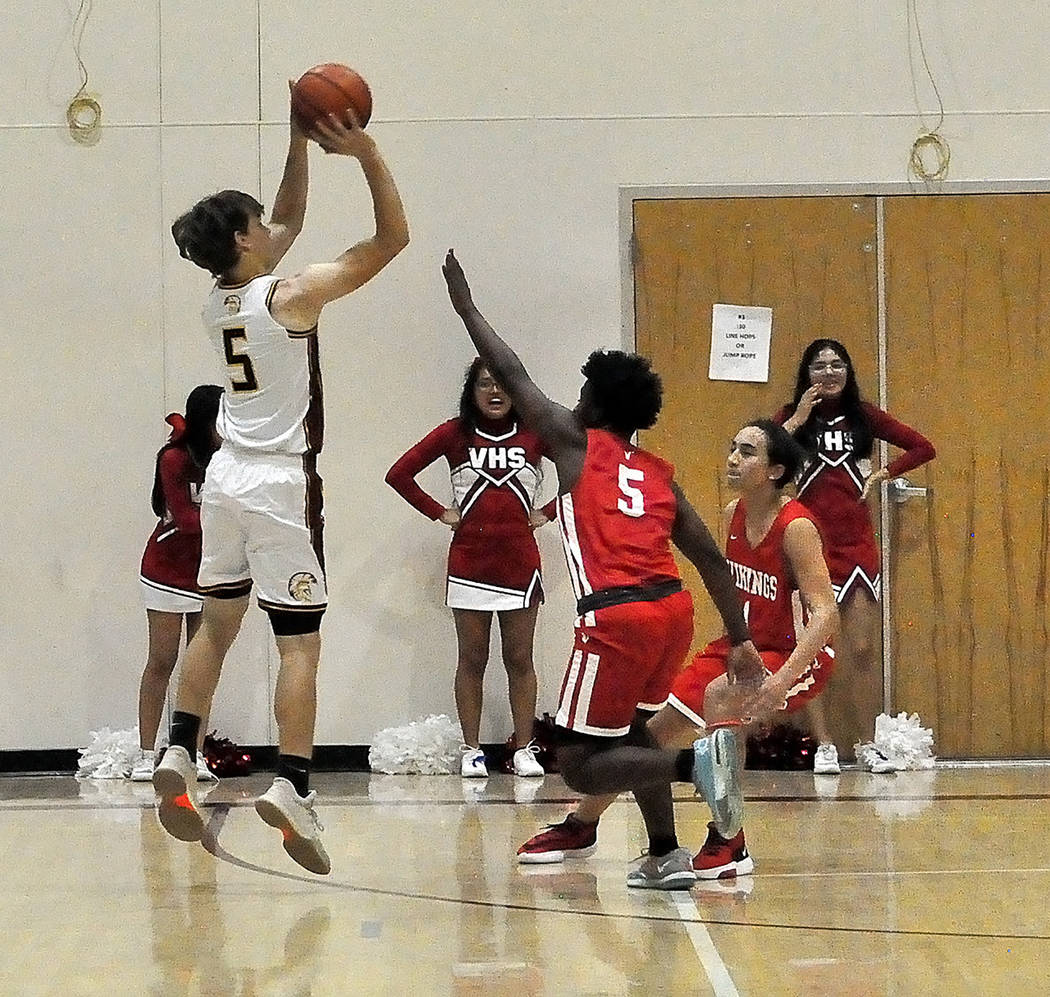 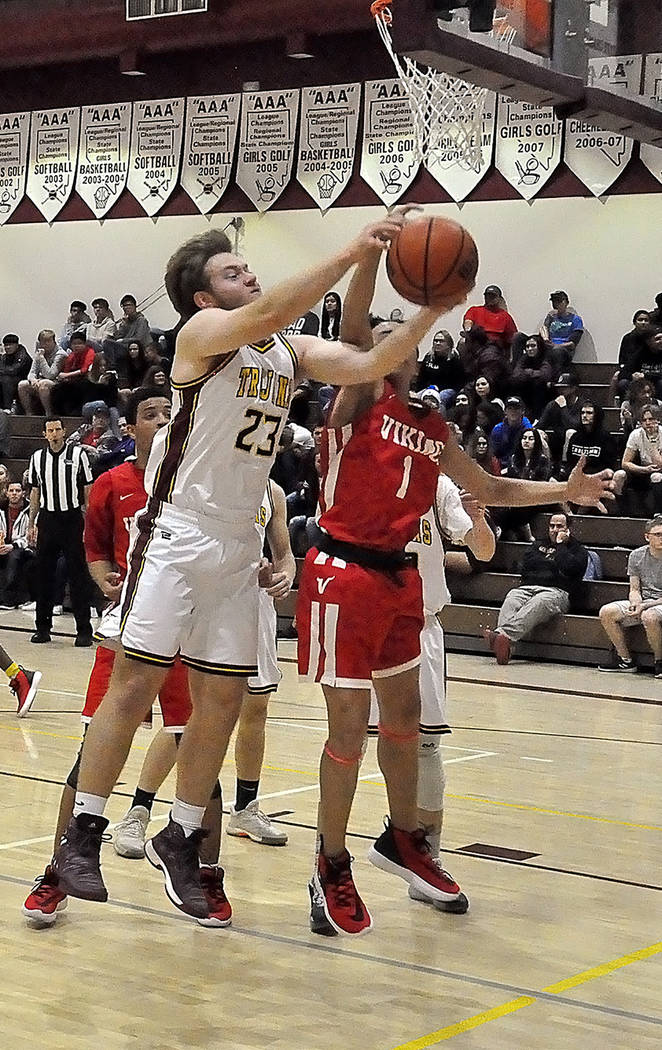 A 2-3 start, including one game on the wrong side of a running clock, might not seem like anything to be excited about, but don’t tell that to Pahrump Valley High School boys basketball coach Dan Clift.

“I told them in the locker room that I haven’t had a team since I’ve been here that was this prepared this early in the season,” Clift said after a 68-32 home loss the Valley on Monday night in the Trojans’ Sunset League opener. “That might have a little bit to do with me, but I think it has a lot to do with them. They’re willing to play multiple positions on offense and willing to give a high effort on defense.”

They also might have found some capable guards to take some of the pressure off of senior co-captain Grant Odegard. Junior Andrew Avena made a statement right out of the gate, filling the stat sheet with 27 points, 9 rebounds, 6 steals and 5 assists in a 65-64 loss to American Prep of West Virginia in West Wendover.

“That’s what we expect from him,” Clift said. “He can do that kind of stuff. He’s an athletic enough kid, but it did surprise me right out of the gate to have that many points.”

“It was a lucky game,” Avena said. “My shots were falling. Most of my games they don’t, but that game it just so happens they were.”

But Avena got hurt against West Wendover, and he was on crutches during Monday night’s game against Valley..

“I rolled my ankle at our tournament up north,” Avena said. “It still hurts. It’s bruising up; it’s still swollen. We’re just going week to week and see how it goes.”

Through Monday night’s game, Odegard was leading the team in scoring at 16 points per game with Avena right behind at 15. But the next three leading scorers are all new to the varsity roster: sophomore Syblue Glisson, a 6-foot-1, 160-pounder averaging 7.4 points and a team-leading 11 rebounds; junior Daniel Gomez at 5-10, 160 who is contributing 6.4 points, 4.2 rebounds and just under 2 steals per game; and sophomore Chris Briscoe, a slight 5-10 and 130, who is putting up 4.4 points, 4.8 rebounds and an assist per game.

Clift knew this season would be one of transition with only two senior starters, Odegard and Koby Lindberg.

“Our senior class, there were only two kids that played last year for us as juniors, so I knew I was going to have a lot of kids who didn’t play varsity,” Clift said. “And we have a few kids who are new to the valley.”

But Monday night was the team’s roughest outing of the early season, as the Vikings took control after a competitive 16-10 first quarter.

“The kids from Valley really picked it up defensively,” Clift said. “I thought for a while there in the first quarter, if this is the tempo, we’ve got a chance. Then as the game went on you could see their level pick up. We can’t sustain the level that we were at, and it seemed those kids were at that level and even going higher as the game went on.”

In fact, the Vikings had to score the last 7 points of the period to take that 16-10 lead, but from then on they were mostly in control. The Trojans did not score during the second quarter until there was 3:12 left in the half, when Odegard sank both ends of a one-and-one.

“When those kids start to double- and triple- team, they’re so dang athletic and aggressive we can’t get the ball to open guys,” Clift said.

The Trojans shot just 11 percent from the floor against the Vikings, including 5 of 36 from 3-point range, and they committed 52 turnovers. Neither is a new problem; the Trojans have 226 turnovers through five games and are shooting 21 percent on the season.

So the Trojans are 0-1 in the Sunset League. But the 2-2 start, which included a 1-point defeat, showed them that against teams that don’t have the athleticism to run them off the floor, they can compete.

“I was pleasantly surprised and happy when I put the final team together that we had such good athletes,” Clift said. “Most of these kids have the basic fundamentals, so it’s really do I want to bust my butt and play defense? We’re deeper this year. We can go seven, eight, nine kids and not fall off.

Next up for the Trojans is a trip to Virgin Valley High School for the Bulldog Invitational. They opened the event Thursday night against Sierra Vista (2-1) and will meet the host Bulldogs or Enterprise today. A third game Saturday completes the tournament.

Somerset Losee 70, Pahrump Valley 38: On Wednesday night, Syblue Glisson led the Trojans with 9 points as they fell to 0-2 in the Sunset, 2-4 overall.

Jayden Young poured in 25 points for Losee, a newcomer to the league which evened its records at 2-2 overall and 1-1 in the Sunset. Logan Gavenda added 6 points for Pahrump Valley.