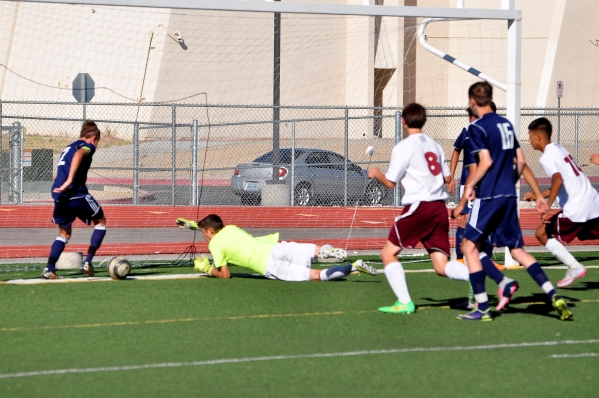 The Trojans boys soccer team ended their losing slide against Spring Valley, and they did it with a 3-3 tie.

The Grizzlies (3-4-1 overall,3-1-1 Sunset League) had only lost one game up to the time they played Pahrump Valley (4-4-2, 0-3-1). They attacked early on in the game and scored two quick goals in the first ten minutes, one goal after the other. They caught Trojans goalie, Nick Harris one-on-one twice.

Pahrump would answer back late in the first half with their own score by Eduardo Garcia. The half ended at 2-1.

In the second half of the game, Spring Valley got their third goal almost halfway through the period at 26:13.

The Trojans put more pressure on the Grizzlies and seemed to be edging Spring Valley for the time of possession for the ball. The added pressure yielded another goal just three minutes after the Grizzlies scored, from Eduardo Garcia, with an assist by Trystyn Wombaker. Wombaker then scored again late in the game to tie it up.