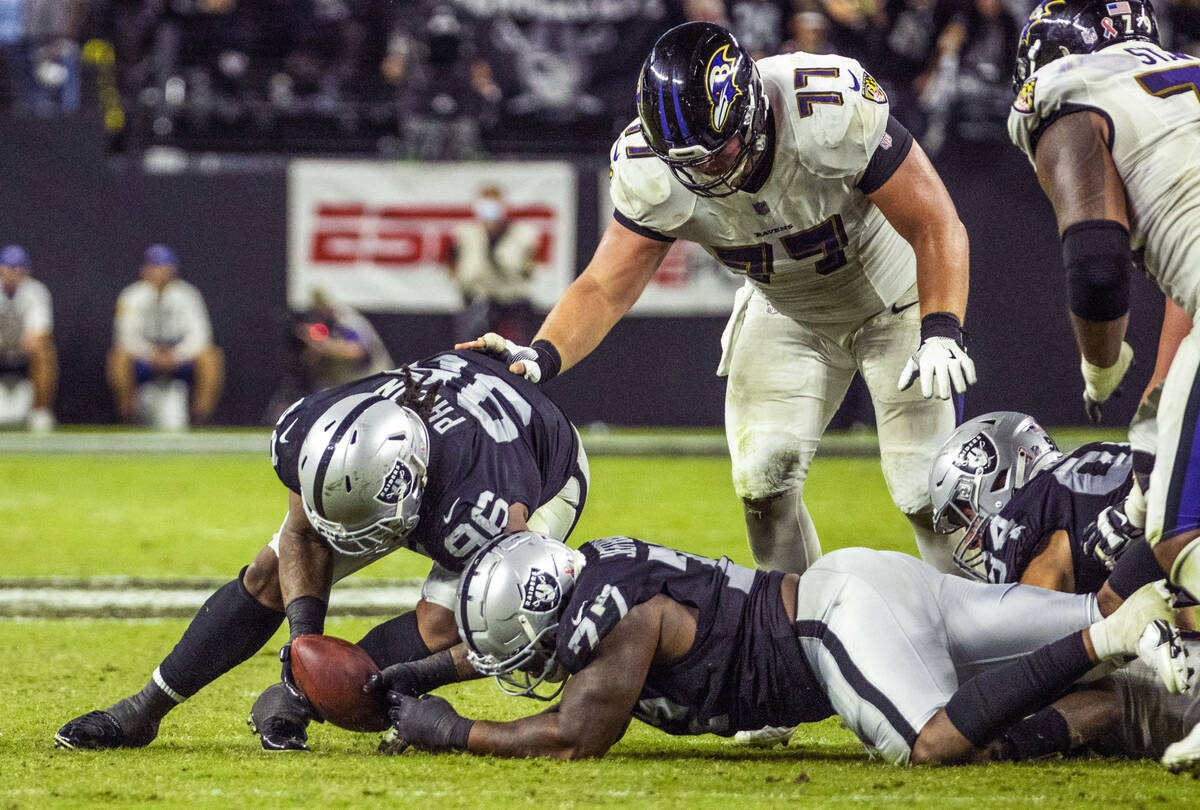 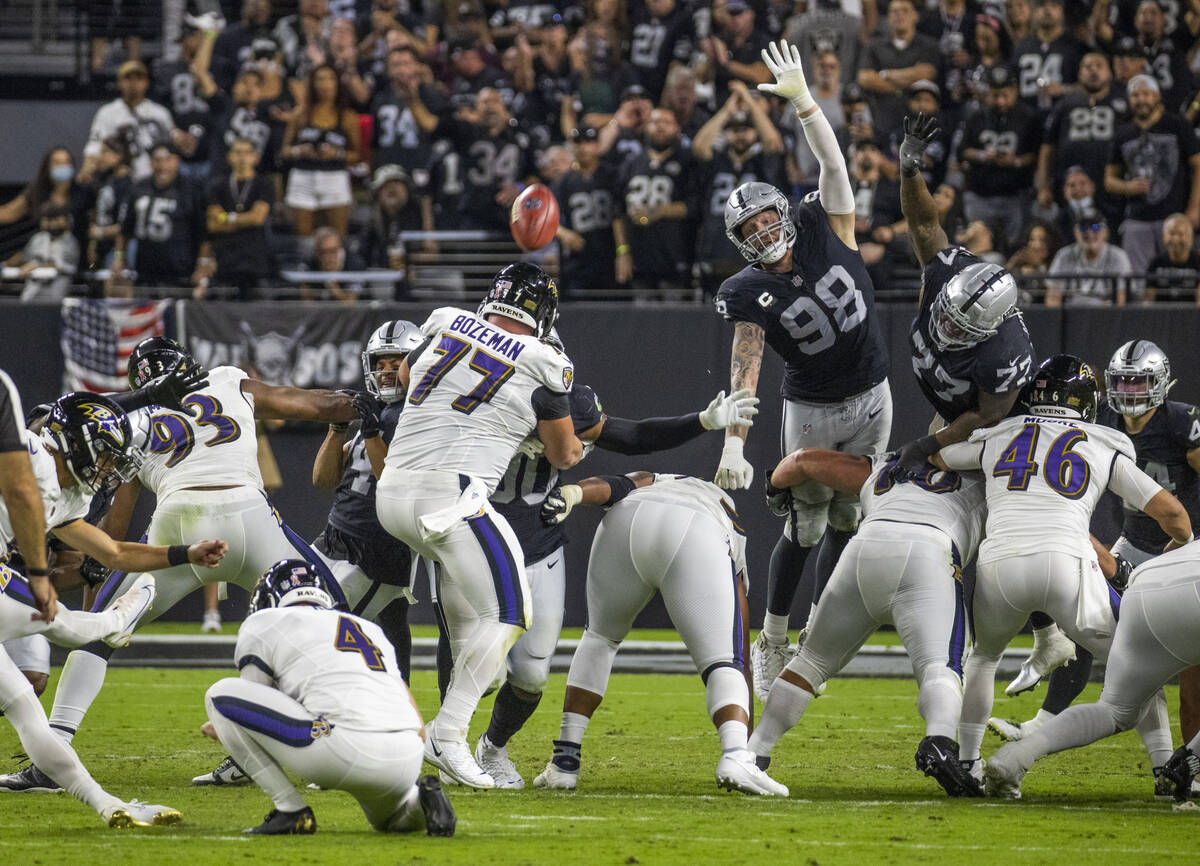 Raiders defensive end Maxx Crosby (98) gets up high to attempt a field goal block during the third quarter of their season-opener against the Baltimore Ravens at Allegiant Stadium on Monday, Sept. 13, 2021, in Las Vegas. (L.E. Baskow/Las Vegas Review-Journal) @Left_Eye_Images 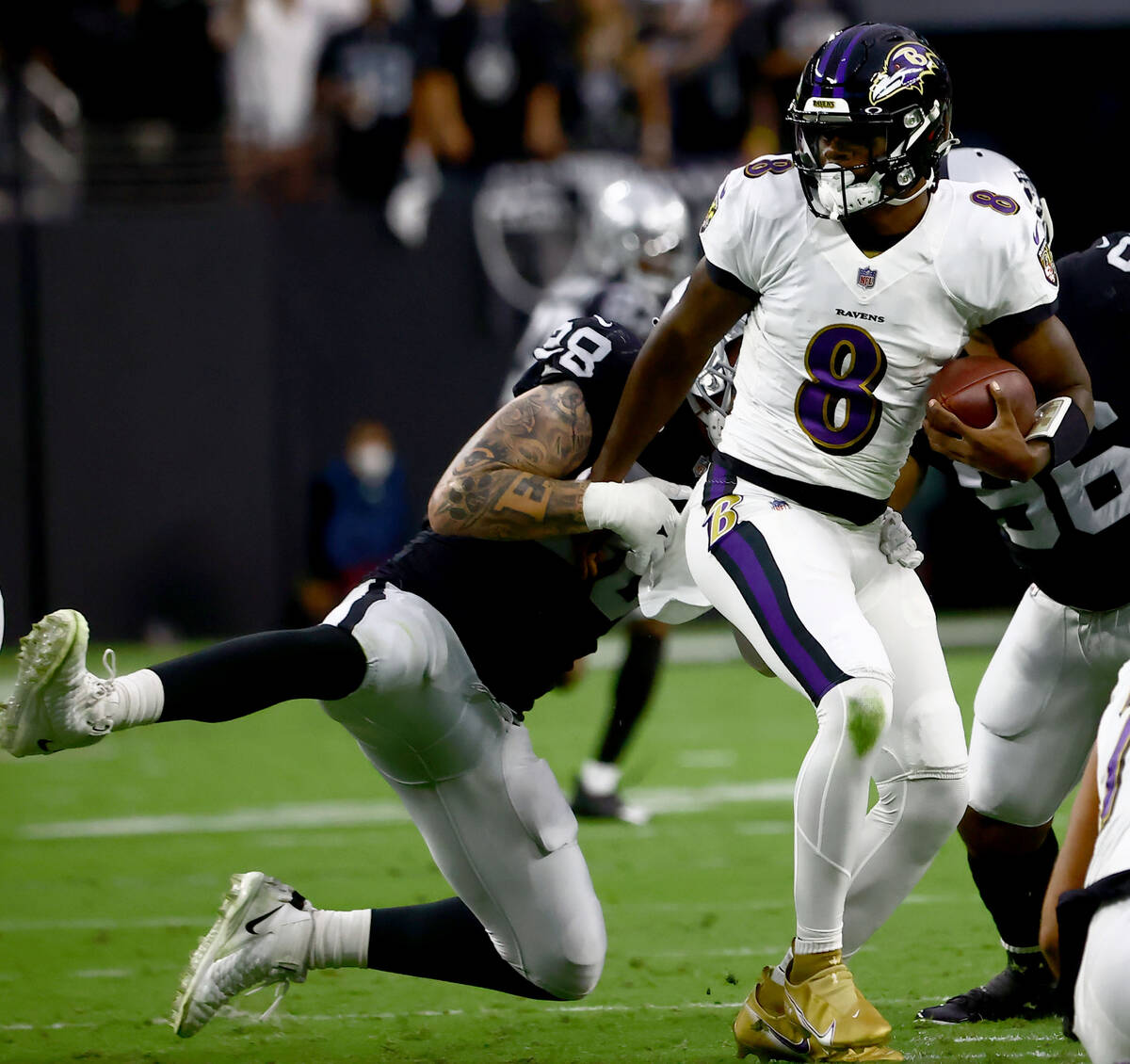 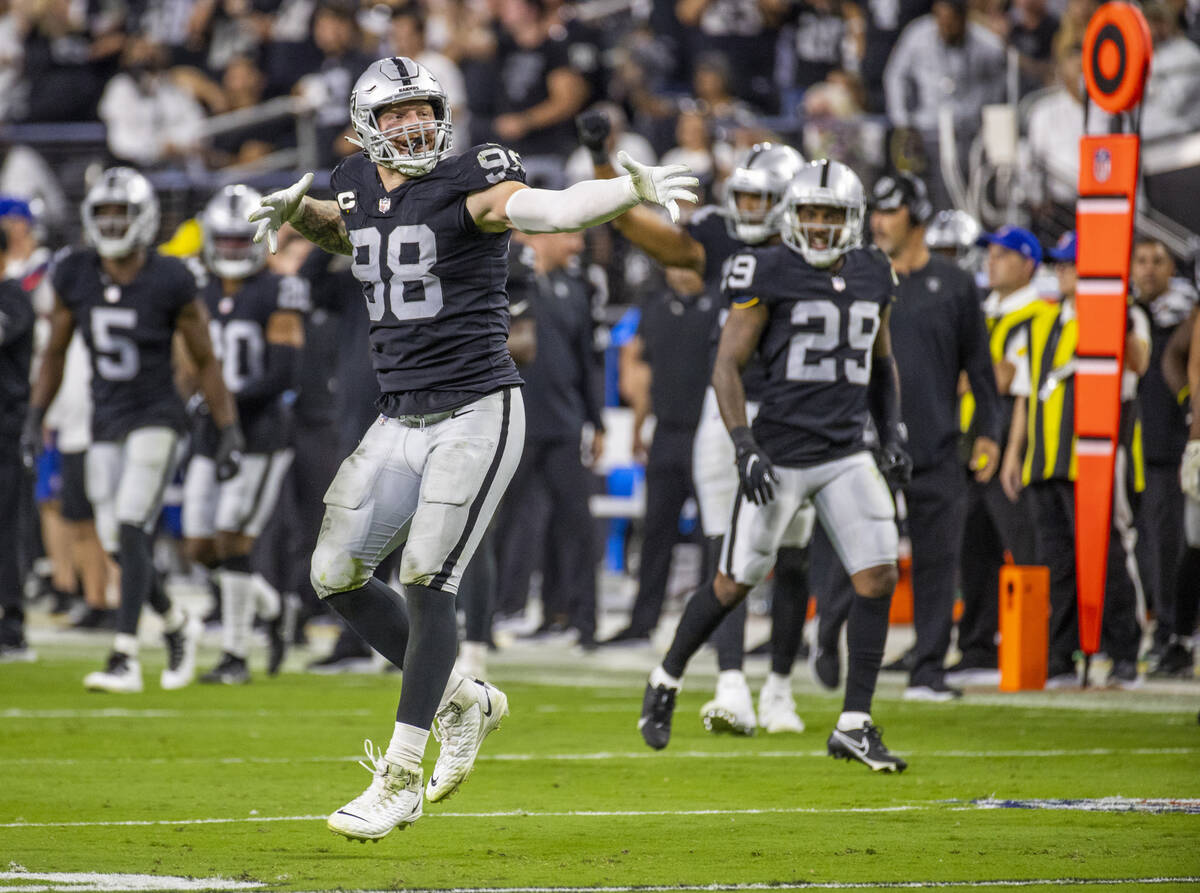 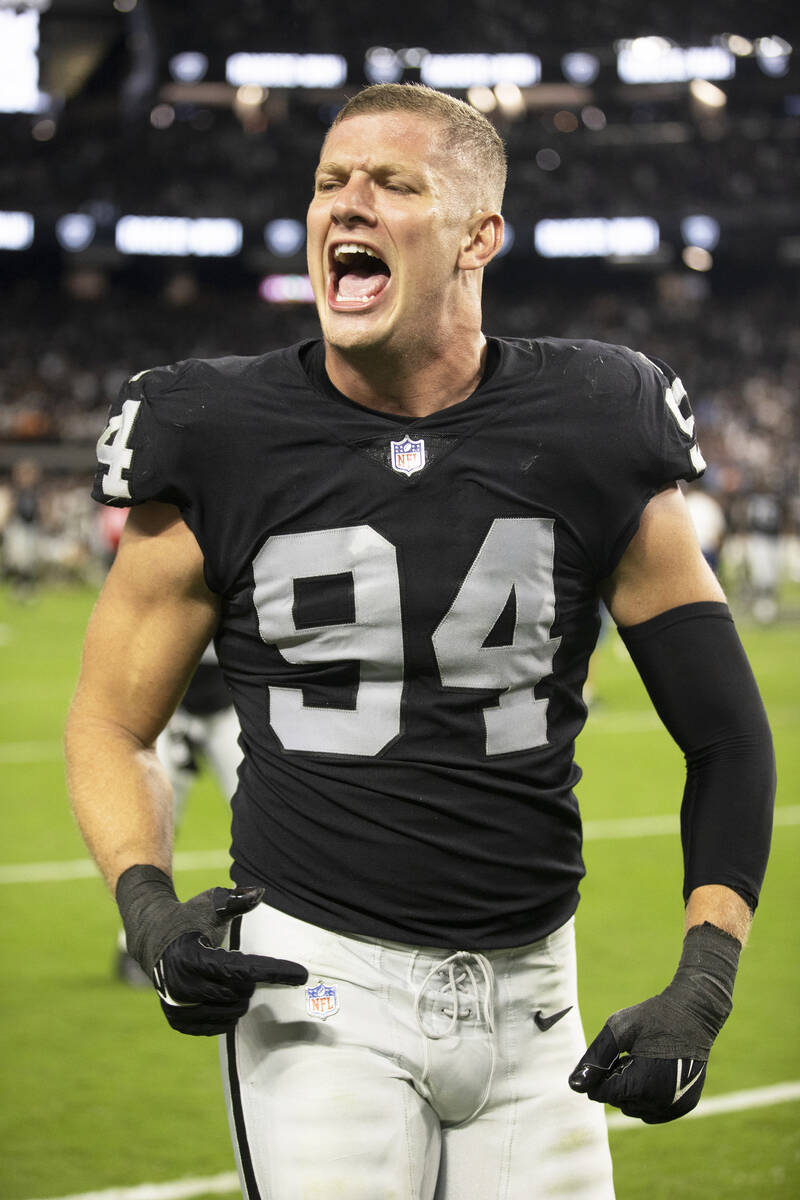 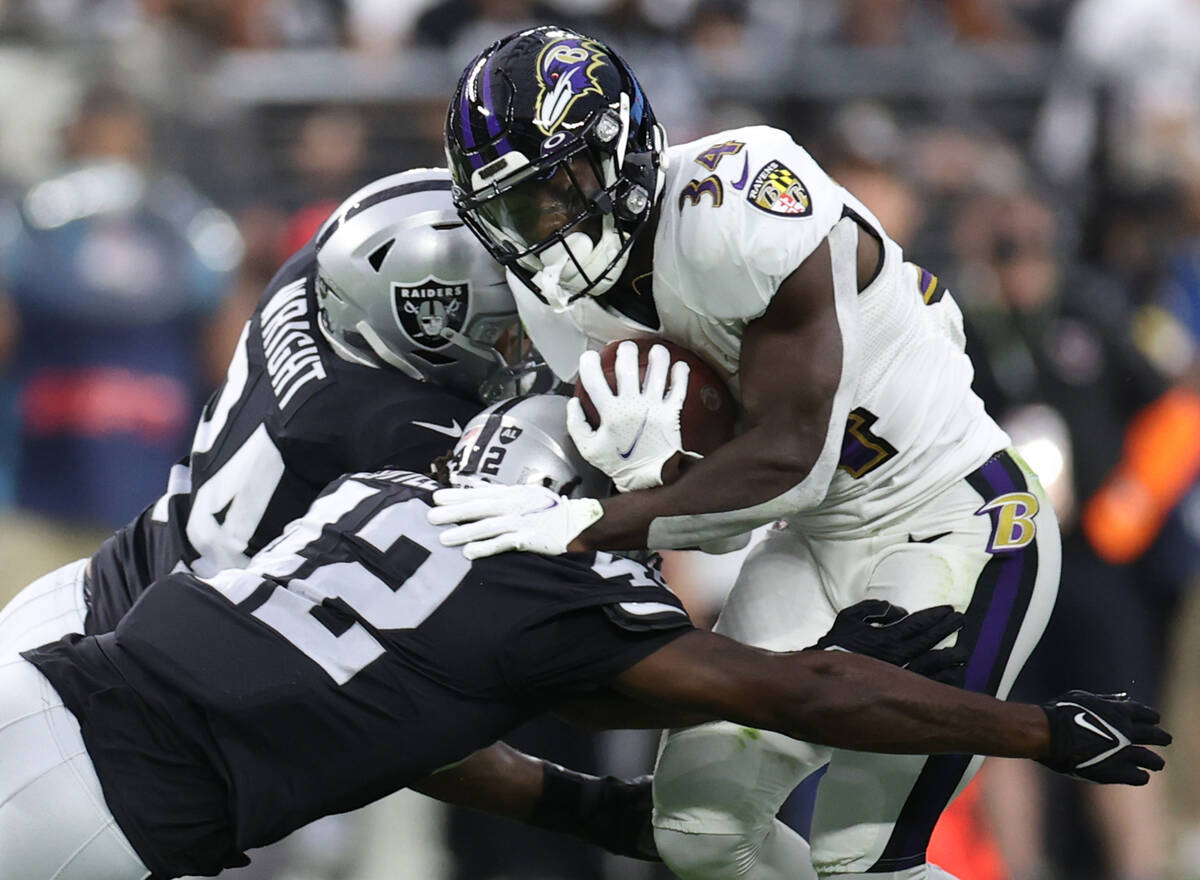 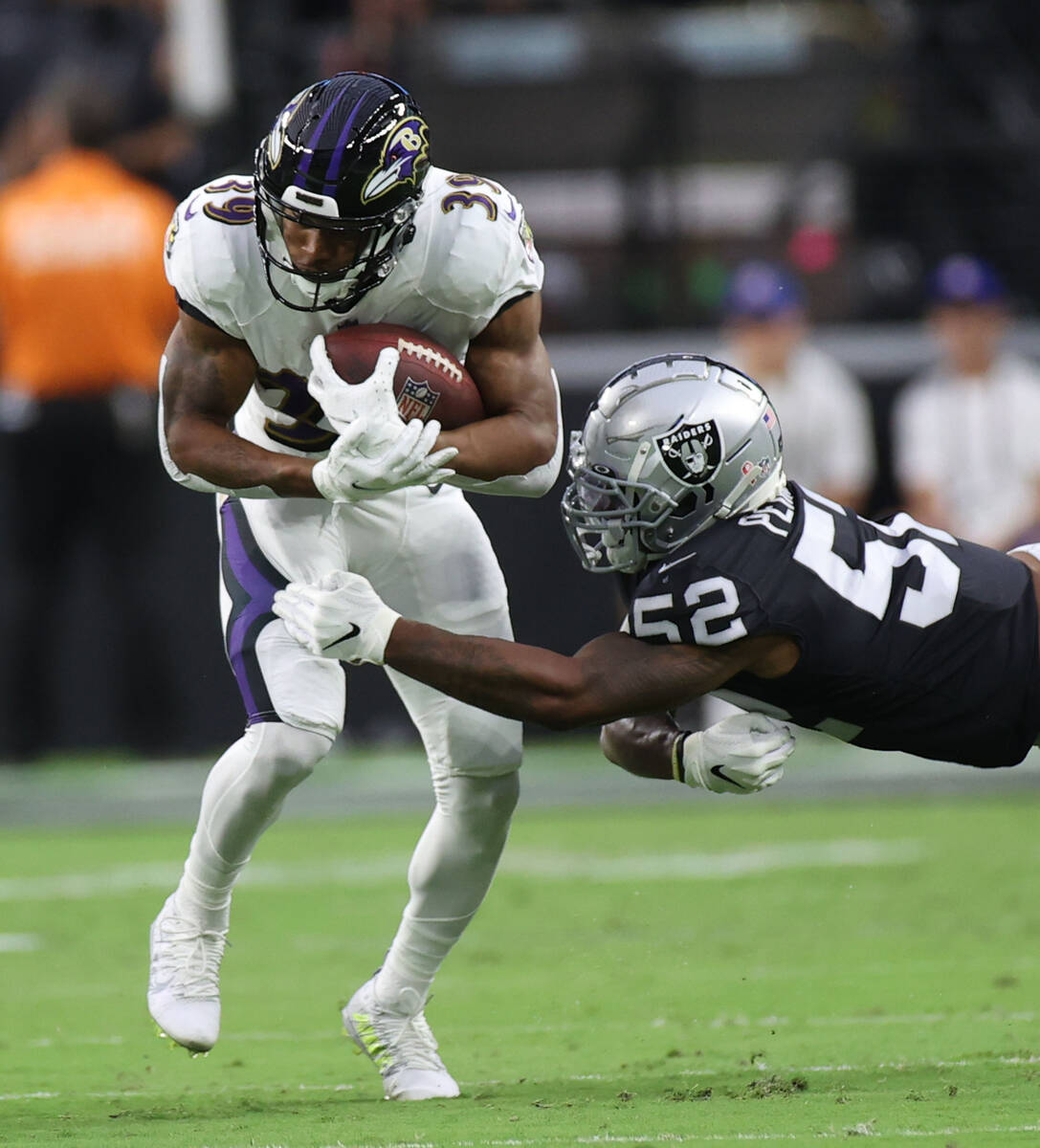 After Monday’s game, it’s no secret who Derek Carr’s favorite receiver is going to be this year. Out of his 56 pass attempts, Carr targeted tight end Darren Waller 19 times. From those 19 targets, Waller caught ten passes for 105 yards and an extremely crucial fourth-quarter touchdown. His touchdown tied the game at 24 apiece, before both teams exchanged field goals in the final minute of regulation to send the game into overtime.

The Raiders weren’t able to get much going on the ground. Running back Josh Jacobs was the team’s leading rusher, going for just 34 yards on ten carries. Jacobs also added two touchdowns in the game. Carr finished the game going 34-for-56 on pass attempts and throwing for 435 yards. The Raiders found themselves behind early, as they were facing a 14-0 deficit midway through the second quarter. Following the Raven’s second touchdown, the Raiders’ offense was able to put together two scoring drives of 75 yards and 48 yards, which were good enough for a combined ten points. These scores cut the Ravens’ lead down to just four points heading into the locker room at halftime, with a score of 14-10.

On a night when Waller was the go-to receiver, it was wideout Bryan Edwards who came up with the biggest catches of the night. On the Raiders’ final possession of regulation, Edwards was Carr’s best option. Edwards caught two passes for 38 yards, setting up the Raiders with a last second field goal by kicker Daniel Carlson to tie the game and send it into overtime.

In overtime, the Raiders got the first possession and drove the ball down the field with a kind of ease that hadn’t been seen all night for the offense.

On a third and 4, from the Ravens 33-yard line, Carr threw a deep pass to Edwards that was initially ruled a touchdown. Unfortunately, the play was reversed due to Edwards’ knee being down before he was able to stretch the ball across the goal line.

What happened over the next three minutes and thirty-eight seconds can be described in no other way but than to say a very rocky, emotional roller coaster.

Facing another third down, from the Ravens five-yard line, Carr targeted wide receiver Willie Snead IV on a slant route. The ball went through Snead’s hands and was intercepted in the end zone by Ravens cornerback, Anthony Averett.

On the fifth play of the Ravens’ ensuing possession, Lamar Jackson was sacked by Raiders defensive end, Carl Nassib, who forced a fumble and the Raiders recovered the ball deep in Ravens territory. Two plays later, Carr dropped back and threw a bomb over the center of the field to wide receiver Zay Jones for the game-winning touchdown.

“He works harder than anyone else on this team,” Carr said about Jones’ work ethic.

The Raiders next game will be on Sunday, Sept. 19, when they travel to Pittsburgh to take on the Steelers. The Steelers are coming off a huge win on the road against the Buffalo Bills. Kickoff is scheduled for 10 a.m.