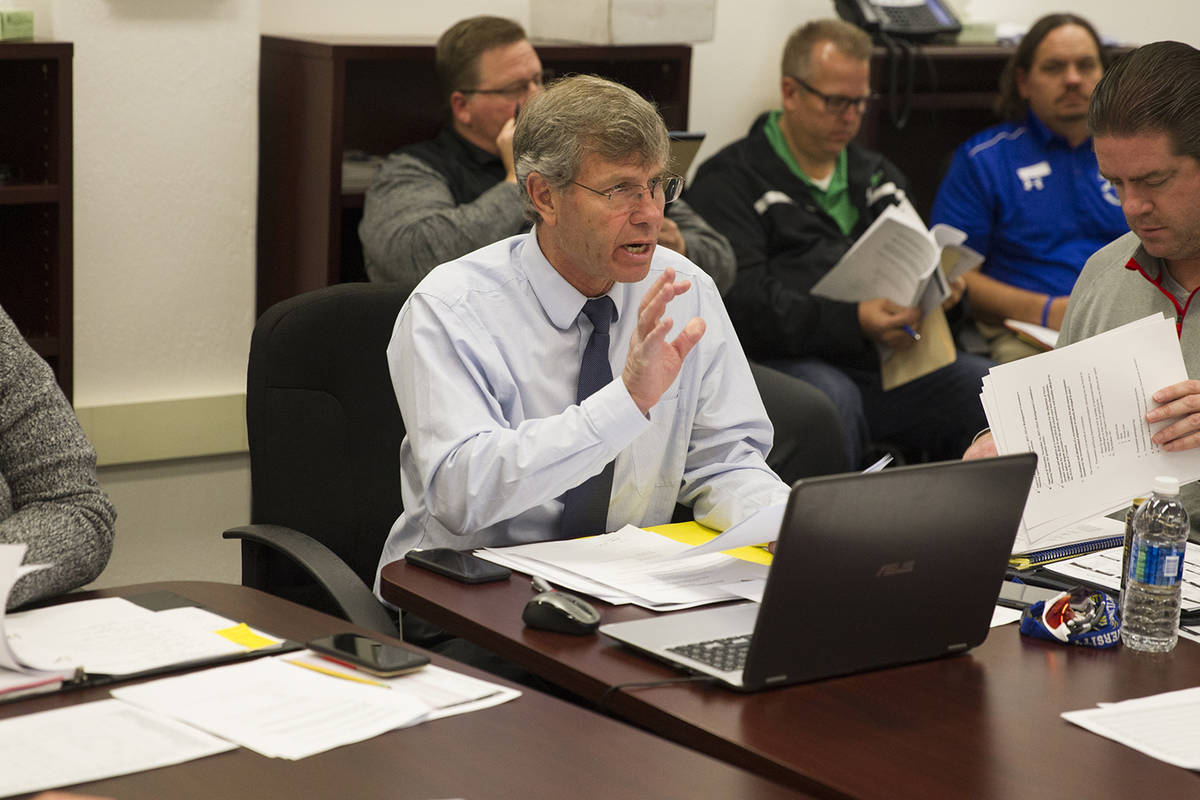 The announcement was made in a statement sent from CCSD athletic director Tim Jackson.

“The District will not participate in any Season 2 Fall sports, which include cross country, football, girls golf, soccer, tennis, girls volleyball and middle school basketball for the 2020-2021 school year. As a reminder, all schools are to remain closed for athletic purposes,” the statement said.

The announcement came less than one hour before a briefing from Nevada Interscholastic Activities Association Executive Director Bart Thompson and co-Assistant Director Donnie Nelson on the status of the sports calendar, and the CCSD’s decision caught the NIAA off guard.

“I was shocked,” Thompson said. “We got that just before we came on. We don’t speak for them. That was an announcement on their part and did not have any impact on what we talked about (during the briefing).”

Thompson said the statewide pause extended by Gov. Steve Sisolak through Feb. 14 is not directly tied to whether sports — specifically full/close-contact sports, will be played, and the potential lifting of the pause is no guarantee of football being permitted.

“This office has been assured that a review of those prohibitions will be a part of the considerations in ending the pause,” Thompson said. “Based on the communications, there will not be a lifting of the prohibition until the ending of the pause.”

Thompson said the NIAA has been in touch with the governor’s office and Nevada’s COVID-19 task force throughout the pandemic.

“It is frustrating because we have the things that we are looking at and they are looking at things across the state, like getting people back to work,” he said.

Thompson announced that the NIAA is recommending that the regular season schedules be vacated in the sports of basketball and wrestling, simply because if those sports were allowed there would be little time for the necessary practices to be conducted and get a season in by the end of the winter sports competition window, which is Feb. 20.

And forget about winter sports being permitted during the dates allocated to the fall and spring seasons.

“We had strong input from our schools across the state,” Thompson said. “We will not move sports on top of other sports.”

He said that smaller schools especially did not want that, as almost all of their athletes participate in multiple sports, but larger schools also expressed a desire not to overlay winter sports onto the rest of the year for the same reason.

While Clark County schools know well in advance of the March 5 start of fall sports competition that they will not be fielding teams, the NIAA is not stopping other schools from participating.

“Cross country, girls golf, boys and girls soccer, boys and girls tennis and girls volleyball may all be conducted within the COVID-19 mitigation guidance,” Thompson said. “We are in full planning mode to make sure those sports are conducted.”

“This was not a surprising announcement since their high schools have not returned to any kind of in-person education,” PVHS athletic administrator Jason Odegard said. “We have already started putting schedules together with the thought that CCSD would probably not be able to participate. Hope to have schedules finished in the next week or so.”

Girls soccer coach Julie Carrington and football coach Joe Clayton are among those who have mentally put together schedules in anticipation of Clark County schools not being available to play.

“I think it’s understandable based on the sizes of their schools and how many kids that they have to work with, but I am sad for the students,” Pahrump Valley girls soccer coach Julie Carrington said. “We will be able to play a few schools — SLAM, Equipo, Moapa — so I’m thankful for that opportunity for our ladies.

“Hoping for the remainder of our teams to get a chance to play.”

SLAM! Nevada and Equipo Academy are charter schools, while Moapa Valley High School in Overton was an exception when the CCSD canceled the winter season. But unlike soccer, football, classified as a full/close-contact sport, needs a change in the current restrictions to be played. Thompson said the NIAA had submitted a proposal to lift the prohibition on those sports but has yet to receive a response from the governor’s office.

If approved, football would be cleared to begin on time, and there even could be a week of competition for basketball and wrestling. “That possiblity is very small,” Thompson admitted, adding that there has been an indication that restrictions will not be lifted during the statewide pause.

“My first thought is that I feel really bad for their seniors who have missed out on so much this year,” PVHS football coach Joe Clayton said. “It is even more unfortunate that it is based on where you live.

“We’ve been hybrid all year and haven’t had too many issues at all.”

Clayton just last week had ticked off most of a possible schedule for the football team. With SLAM! Nevada and Moapa Valley in the Class 3A Southern League with the Trojans, home-and-home series with them and a possible game against Faith Lutheran — which reopened a few days earlier — would provide five games. The competition window allows for six.

Other Nye County schools will not be as affected by the CCSD decision, as Beatty, Round Mountain and Tonopah high schools are in a league without Clark County schools. Those three are grouped with Mineral County and Pahranagat Valley for football, with Lund included for volleyball,in the Class 1A Central League.