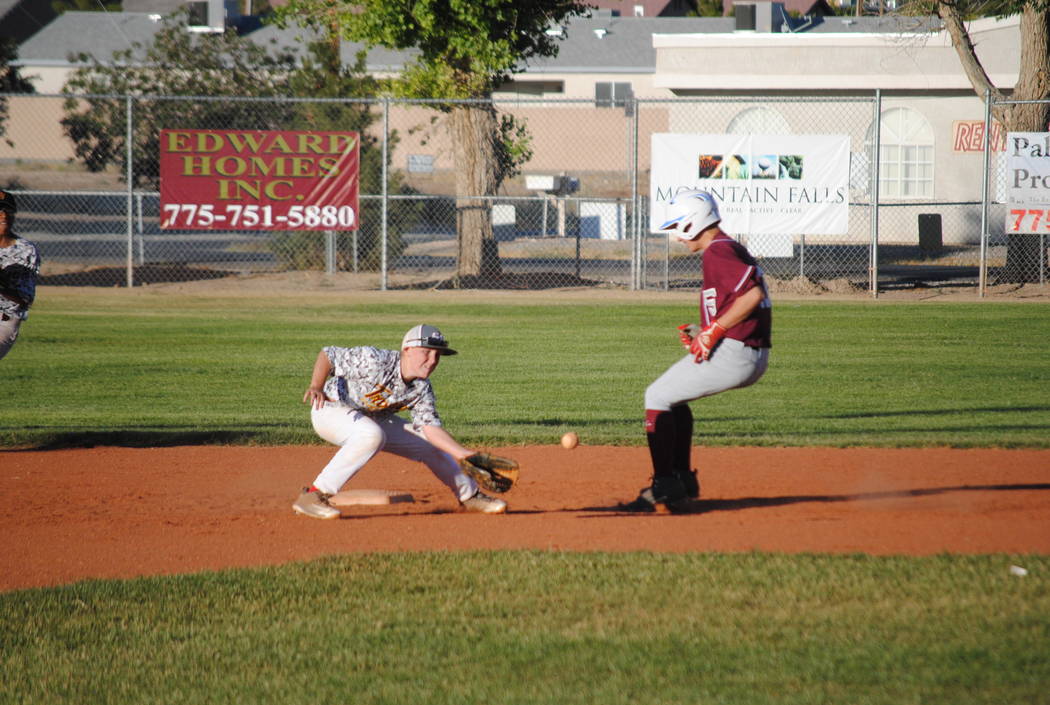 Charlotte Uyeno/Pahrump Valley Times Ryan Braithwaite gets the out at second base on May 20 at Ian Deutch Park in the 14U Connie Mack season opener. 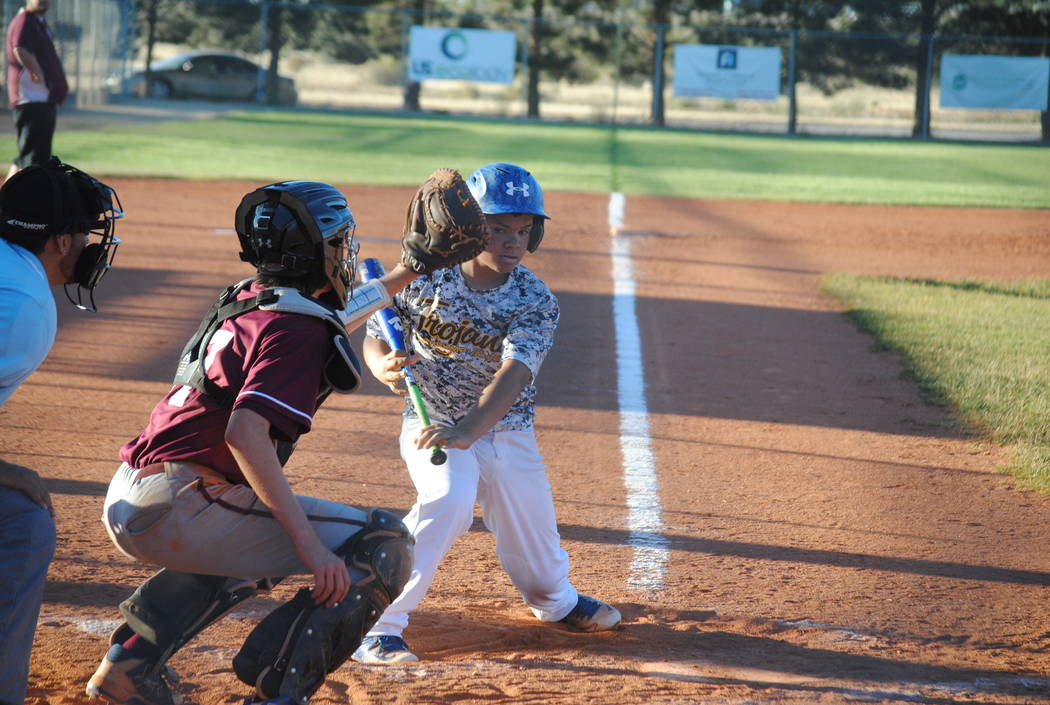 Charlotte Uyeno/Pahrump Valley Times Outfielder Brysten Marquez keeps an eye on the ball on May 20. The Trojans 14U team is off to a slow start, winning their first game against the Chargers Black team on June 13.

The “Trojans 14U” Connie Mack baseball team recorded their first wins of the Summer season (2-6) as they routed the Chargers Black team in a doubleheader on Tuesday night at home, 20-6 in the first game and then they beat them in a close game in the nightcap 9-7.

“The bats exploded for 20 runs on 17 hits and 11 walks the first game,” Trojans 14U coach Drew Middleton said. “Coming into the game we had 11 hits as a team through six games and our bats broke through.

Seven of the nine hitters had a multi-hit game. Jake Riding threw well on the mound, throwing a complete five-inning game. He struck out three and walked two, out of the six runs, only two were earned.”

Middleton said the new addition of Jalen Denton helped enormously in the middle of the order.

“He went a combined 6-8 in the two games and had three doubles, a triple and seven RBIs,” Middleton said.

“We were also more aggressive on the base paths with eight stolen bases. Ryan Braithwaite had three, Coby Tillery had three and we ran the bases very well.”

“Coby Tillery came in and threw well,” Middleton said. “He threw strikes, but let them back into the game with mental errors. It was tied 7-7 going into the fifth when we regained focus. Jalen Denton had the game-winning two-RBI triple to win it. Ryan Braithwaite came in and closed it on the bump, throwing very well the last two innings of the game. Dylan Keller hit very well and also had a big two-RBI single in the third in game two.”

Trojans coach Eddie Martinez’s 16U team is doing well and is in first place at 5-2.

“I really can’t take the credit for this team,” Trojans Connie Mack coach Eddie Martinez said. “The credit goes to their high school coach, Brian Hayes. He gave me the players and I am having a good time coaching them. The summer is for getting reps for these guys and playing the game and that is what we are doing.”

Martinez said the first two losses were because the team was getting organized. Since then they have not lost a game.

“The pitching has been steady and Cyle Havel threw a shutout and Jakob Fiener threw a no-hitter,” Martinez said. “Our hitting has been good with credit going to the whole team for getting key hits when we need them.”

Connie Mack baseball is a youth baseball league that prepares baseball players to play at the high school level. The Trojans high school team plays in a 16 and under league and there is also a 14-and-under team that has middle school players on it.

The next 14U game the Trojans will host are the Faith Lutheran Crusaders at 5 p.m. on Saturday, June 17.

The next home game for the Trojans 16U team is at 6 p.m., on Monday, June 19, at Ian Deutch as the team hosts Slam Academy.