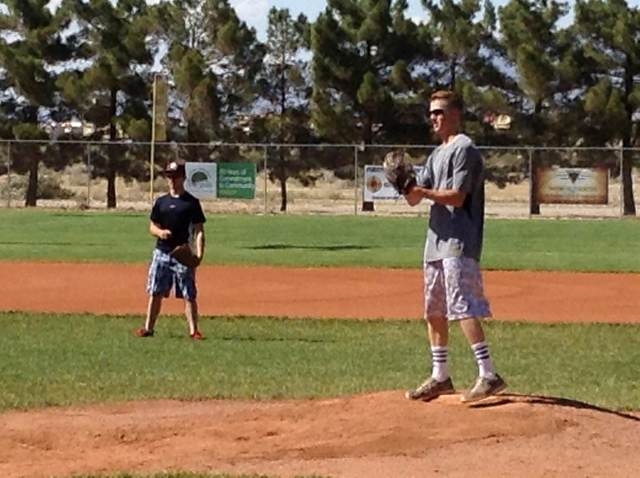 Connie Mack baseball started in Pahrump on Saturday for the 14 U group. They played their first game at home and were swept by the Bulldogs, 12-2 and 11-3.

According to Trojans Coach Brian Hayes, five of the team members on that team played on the Little League World Series team.

Hayes said his 14U team may have gotten slammed during those two games, but he still feels the team has a lot of good talent.

“The team is lacking some basic skills, like where to throw the ball to the cutoff man and just basic communication skills,” he said. “As the summer goes on, I expect communication to be better.”

He also said his 16 U team is having problems because the catcher didn’t show up for the game.

“They stole 15 bases on us on Monday and now it looks like I will have to find a new catcher for the summer,” he said.

Hayes said the players are excited about the switch to Connie Mack this summer. This is the first year for Connie Mack since switching from American Legion during the spring.

“The schedule was the biggest reason for our switch to Connie Mack,” Hayes said. “Our 14U team plays 20 games, with 15 at home, while our 16U team plays 22 games, 10 at home. We were also given the flexibility to make our own schedule, which allowed us to end our season at the end of June, giving our players and coaches some summer left to plan vacations.”

The goal of the program the coach emphasized is to continue to build our high school program through the summer.

“We have right around 30 kids playing on two different teams,” he said. “Our 14U team combines seventh, eighth and ninth graders and our 16U team combines 8th-11th graders. Some players will be floating between the two teams.”

Hayes thanked Lou Banuelos, Pahrump Valley Little League president, and the Little League. He said Banuelos has done a wonderful job spreading the word for our tryouts, setting up local umpire crews, and setting up practice schedules to allow us to practice on the field.

Hayes also thanked the parents for their support, especially Charlotte Uyeno and Annette Fuentes, who have been instrumental in helping the team raise money to keep costs down.

“We have more parents at practices than most teams have at their own games,” he said.

Uyeno helped coordinate the Maroon and Gold game in the spring, which brought in close to $700 and Fuentes has been on the fundraising trail helping them raise another $1,000.

The team will play its next game on June 4 home at 5 p.m.