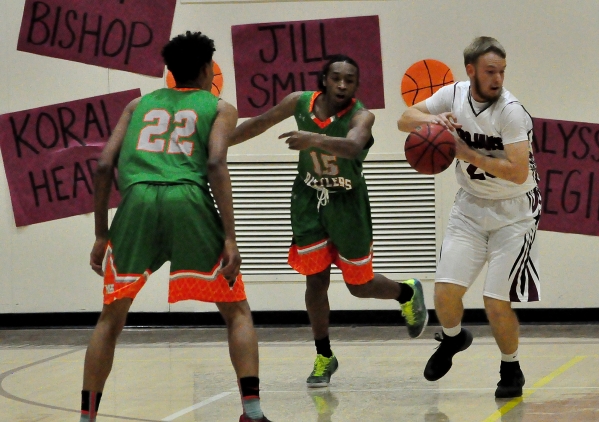 The Trojans played the 2015 state champions and number one seed Clark on Monday and were soundly defeated. The Chargers (18-3 overall, 9-0 Sunset League) had a 17-1 lead at the end of the first and a 39-15 lead at the half.

Bryce Odegard led the team against Clark with 11 points. Danny Foss had 10 points on Saturday and 9 on Monday.

Trojans coach John Toomer said it is a simple problem, “We need to make baskets.”

He added, “We did not score even though we shot a lot of good shots, they just did not go into that orange circle on the backboard. If you talk to anyone we could just check this off as a poor coaching effort, that is what I am hearing from the crowd as they are telling the boys to do a variety of things other than what I have told them to do or just what I have already told them.”

A Trojans fan who asked to remain anonymous said, “Those who think they can do a better job than Toomer need to just sign up, but I don’t see them stepping up.”