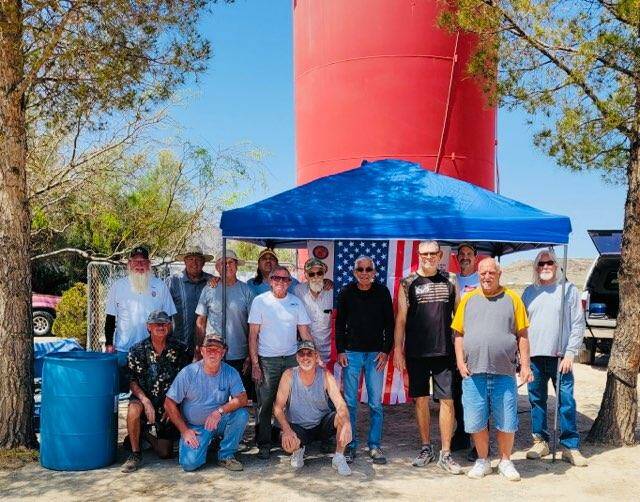 Special to the Pahrump Valley Times ' The Shoes & Brews Horseshoe Pitching Series held a tournament at the HUBB Bar & Grill in Pahrump on Sunday, April 24. Dennis Anderson and Randy Salzwimmer took first place. They were awarded 10 points in the season standings and received a cash prize.

The Shoes & Brews Horseshoe Pitching Series held their latest tournament on Sunday, April 24, at the HUBB Bar & Grill in Pahrump.

This was the fifth event of the year in the Shoes & Brews series.

This tournament had 12 pitchers split into six teams. Each team consisted of an A division and a B division player.

The teams of Dennis Anderson and Randy Salzwimmer and Lathan Dilger and Mike “Nico” Nicosia finished tied for first place with identical records of 4-1.

After having a playoff match, Anderson and Salzwimmer came out on top and took home first place.

With their win, each pitcher was awarded 10 points toward their season standings, along with 50% of the cash prize pool.

For coming in second place, Dilger and Nicosia each received five points toward their season total and 30% of the cash prize pool.

In third place was the team of A player Lawrence Workman and B player Dave Barefield. They finished the tournament with a record of 3-2.

Workman and Barefield each received three points toward their Shoes & Brews series total for the season. They also received the remaining 20% of the cash prize pool.

The current leaders of the Shoes & Brews series are Dennis Anderson for the A division and Chuck Smith for the B division.

With his first-place finish in this tournament, Anderson now has 20 points, leading second-place pitcher Jason Barela by seven points.

Smith has 18 points to lead the B pitchers. Four players are currently tied in second place with 10 points each.

The next Shoes & Brews series event will take place this Sunday, May 8, at the Oasis Bar & Grill in Indian Springs.

All pitchers should be signed in by 10 a.m. to participate in the tournament. If you have any questions, or are interested in joining the Shoes & Brews series, please contact Lathan Dilger at 435-691-3857 or email him at lathandilger@gmail.com.