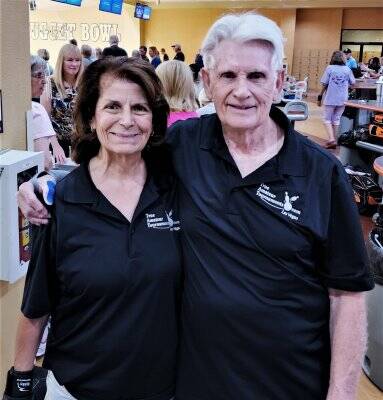 Randy Gulley/Special to the Pahrump Valley Times Juanita Martinez and Randy Gulley sponsored the PVTBC event held at the Pahrump Nugget on Saturday, May 28. The tournament had 79 bowlers participate. 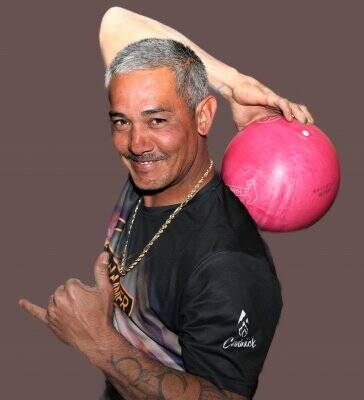 Randy Gulley/Special to the Pahrump Valley Times Derek Correa took first place in the PVTBC event held at the Pahrump Nugget on Saturday, May 28. He scored 854 points for his second PVTBC event win in a row.

In addition to Rupe getting his first win of the season, Derek Correa’s A division win gave him wins in back-to-back PVTBC events.

Saturday’s tournament was a 3-6-9 singles event, featuring 79 bowlers that were split into an A division and a B division.

Mary Martinez finished as runner-up in the A division with her total score of 828 points. Martinez was the only bowler in the top three finishers of the A division to have bowled 220 or more in all three games.

Martinez edged out third-place finisher Annette Attebery by the slimmest of margins. Attebery ended the tournament with 824 points after bowling games of 207, 198 and 230. She also had a handicap score of 189 pins.

Randy Gulley and Troy Smith Jr. rounded out the top five spots for the A division.

Gulley’s total score of 815 gave him a fourth-place finish, while Smith Jr. came in fifth place with a score of 811 points.

In the B division, Rupe went home with the top spot and finished with the highest overall score of the tournament.

Before this win, Rupe’s highest individual finish was 29th in PVTBC’s March event where he scored 723 points.

Fran Gobbi followed up behind Rupe, finishing in second place. She bowled games of 210, 244 and 204. After adding on her handicap score of 191, Gobbi finished with a total score of 849 points.

The third-place finisher for the B division was Ralph Johnson, getting his first top 10 finish of the season.

In addition to the winnings bowlers received for finishing in the top 10 spots in their divisions, there were also winnings given out through the handicap and scratch side pots.

The top spot in the handicap side pot went to Derek Correa with his total score of 854 points. Gobbi, Johnson, Cole and Guglielmoni finished out the top five positions.

A total of 14 bowlers received a cash prize for their finishing places in the handicap side pot.

The top spot in the scratch side pot went to Smith Jr. with his total score of 757, not including his handicap score.

Martinez, Jim Sparlin, Barry Holmes and Dale Bystedt were the other bowlers who received cash prizes from the scratch side pot.

Following the tournament, a 50/50 raffle was held and Martin Aune came away as the winner.

PVTBC Secretary/Treasurer Debbie Varner would like to thank Barbara Wilson and Mary Martinez for helping out during the tournament.