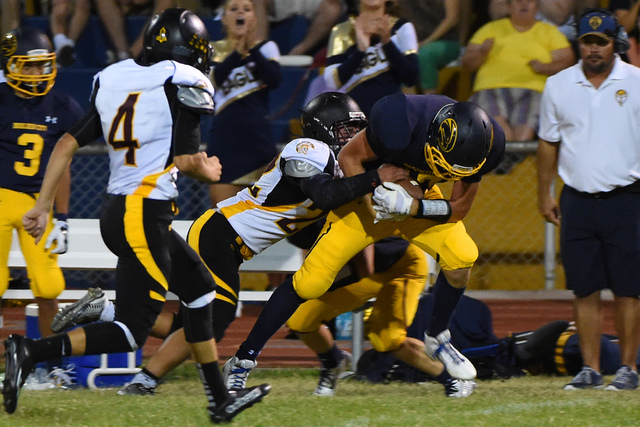 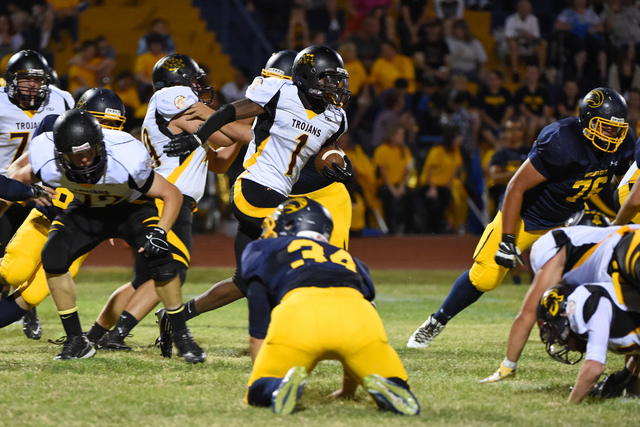 The Trojans expected to do well at Boulder City based on their ability to stop the run against Bonanza the week before and past experiences with Boulder. Three sports writers had picked the Trojans to walk away with a win on Friday night, but the Eagles surprised everyone.

Quarterback Phillip Carmell put a wrench in the Trojans game plan. The Trojans defense, who played well against Carmell last year couldn’t stop the Eagles rushing attack this season as the Eagles rolled to a 50-21 victory over the Trojans.

The game started out well for the Trojans as they marched down the field in the first quarter and drew first blood on a 15-yard pass from quarterback TJ Milk to Deon Estes for a touchdown with five minutes to go in the first quarter. It was Pahrump 7-0.

The lead did not last long as the Eagles marched back down and scored from the 2-yard line on a run play by Brooks Roe. The Eagles then converted a two-point conversion to go ahead 8-7.

Roe had a hundred yard game against the Trojans who could not stop him or the Eagles ground game. The Eagles rushed for 297 yards against the Trojans and passed for 169. Charlotte Uyeno, a Trojans fan, said that Carmell was unstoppable and quick. In the second quarter, Carmell had the ball midfield and ran the ball 52 yards for a touchdown with five minutes to go in the half. With the two-point conversion good, the Eagles were up 16 to 7.

Pahrump answered with a Milk 76-yard pass to Deon Estes for a touchdown and Harris converted the two-pointer for the Trojans. The Eagles came back with another touchdown with under a minute to go and the two teams went into the locker room at the half with the Eagles on top 22-15.

In the third quarter, Roe ran the ball from the Eagles’ 7-yard line for a 93-yard touchdown run. The third quarter ended with Pahrump still within striking range, 28-15.

The Eagles were just too much for the Trojans in the fourth and things got ugly as the Trojans gave up 22 more points, while only scoring one more touchdown.

In the fourth quarter, Roe had a fumble recovery that resulted in a touchdown. In the game, the Trojans had two turnovers.

The Trojans had one score in the second half and that came from a 78-yard pass reception made by Harris with six minutes to go in the game.

The Trojans are on the road again this Friday at Mojave for a tough one. The Rattlers are 2-0 as they beat the Chaparral Cowboys 32-26.

The game will be the first conference game for Pahrump. See Friday’s edition for the matchup.