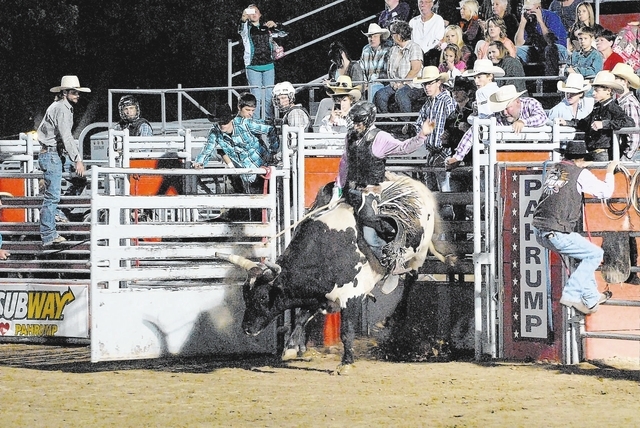 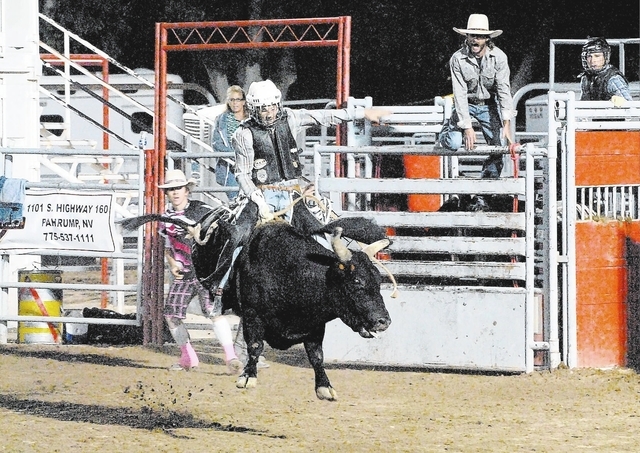 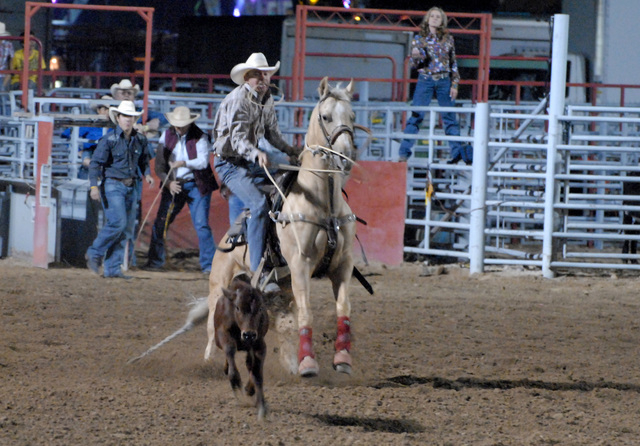 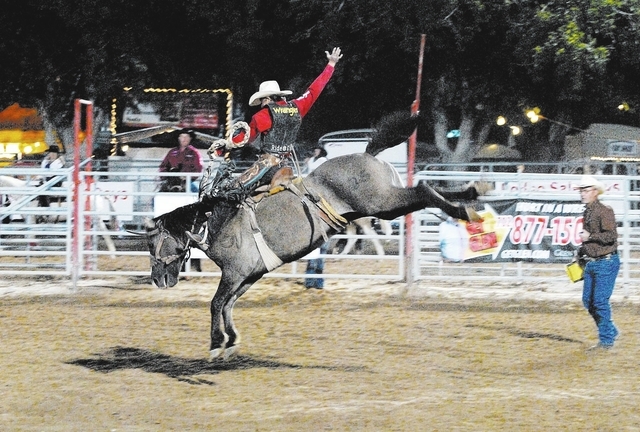 The event was held both Friday and Saturday evenings. Rodeo Chairman Marilyn Dolan was actually spotted watching the excitement on Saturday night and sitting down, which was a sign things were running smoothly as planned. She had said earlier she rarely gets to enjoy a rodeo because she usually is running around behind the scenes.

At the rodeo, the crowds watched bull riders and bronc riders test their skills. They watched ropers, barrel racers, clowns and even a precision drill team entertain them. The crowds were pleased and the organizers relieved everything went off smoothly as once again the Pahrump Fall Festival brought a successful rodeo.

Pyle worked the VIP gate and he had nothing but praise for the way things were organized and run. He is known in town for bringing the Women’s Professional Rodeo Association back to Pahrump.

“The house was packed Saturday and Friday night was three-quarters full. I would like to see more of this and everyone I talked to would like to see more,” he said. “I go back a long ways with Bill Maddox, Marilyn’s deceased husband. I have been working the rodeos since 1985. Marilyn and I get along great. We talked about different things. I would also like to bring back the Senior Rodeo, which I have on the back burner. Marilyn also gave me some good input on the WPRA rodeo.”

This successful event has many people thinking the Professional Rodeo Cowboy Association should come back to Pahrump. Pyle believes if you get a person who knows what they are doing with rodeos the PRCA can come back.

Dolan said last week that the PRCA said they would come back to Pahrump if the town had enough hotel rooms built. Pyle believes it could come back sooner.

“I think the PRCA rodeo could come back for the fall festival. I think it could be done through the fair. Marilyn did such a good job putting this thing back together. She jumped in it with both feet last year and saved having a rodeo. This is the “new old West” let’s get back to our origins,” he said.

Pahrump Fall Festival Chairman Matt Luis talked about the rodeo and was asked about the parking being charged in the back of the arena. Some people had thought the town was doing the charging and Luis clarified the situation. He said, “The town had nothing to do with the parking being charged. It was a private person charging. That was not the town of Pahrump. Besides if we did charge for parking then we would have to staff it and that is more of a hassle than it is worth,” he said.

When asked if the committee would seek the same rodeo next year or try for the PRCA he replied, “We really don’t know. It’s not that I can’t tell you, but we truly don’t know at this point. It’s so soon and we really just don’t know.”

Former festival organizers from the Pahrump Alliance for Valley Economic Development (PAVED) said the reason it did not seek the PRCA was because the cost was too high. Luis hinted he agreed with Dolan and Pyle. He said, “We really don’t know, but there are deals that can be worked out. It depends on their schedule and all types of things. We had it in the past so it’s a maybe.”