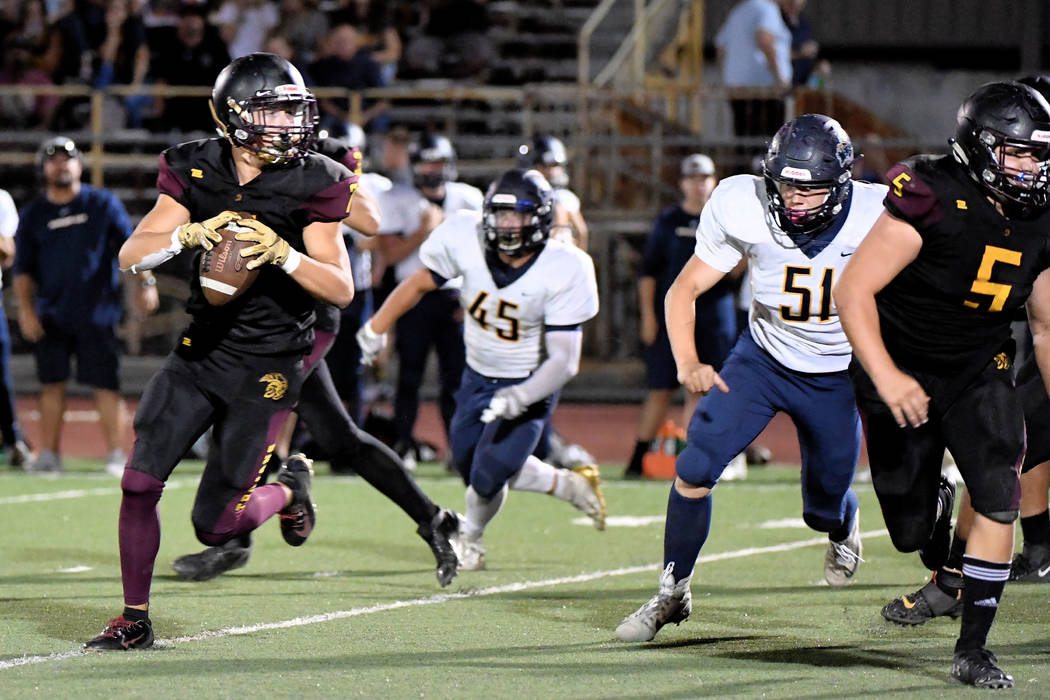 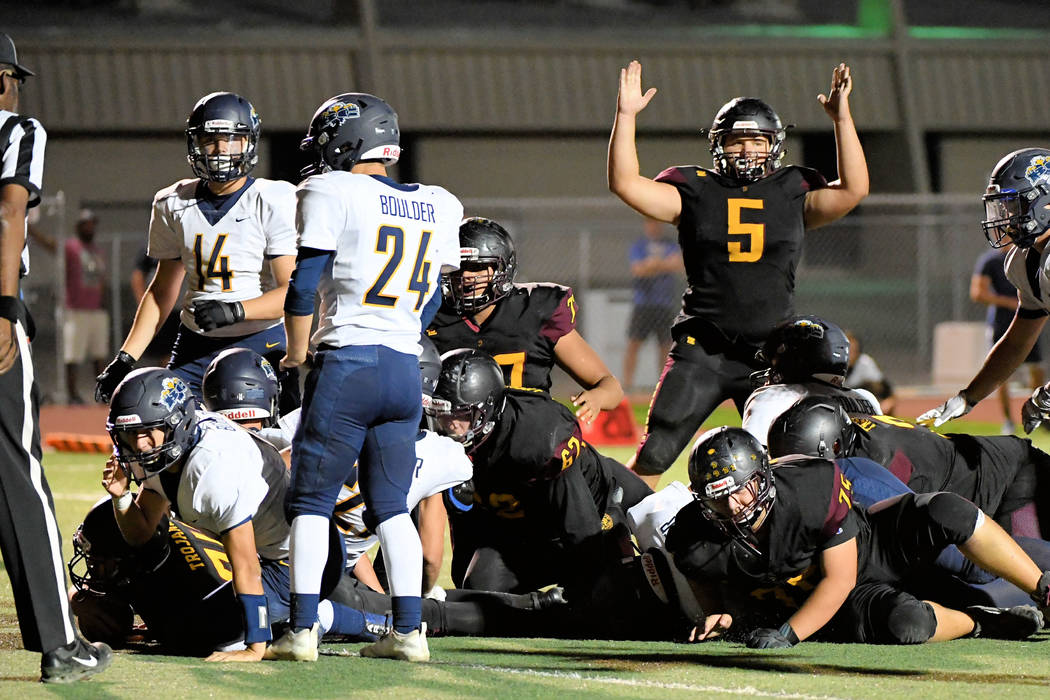 Peter Davis/Special to the Pahrump Valley Times Senior Kody Peugh signals for a touchdown on a play near the goal line during Pahrump Valley's 20-18 to Boulder City on Friday night. 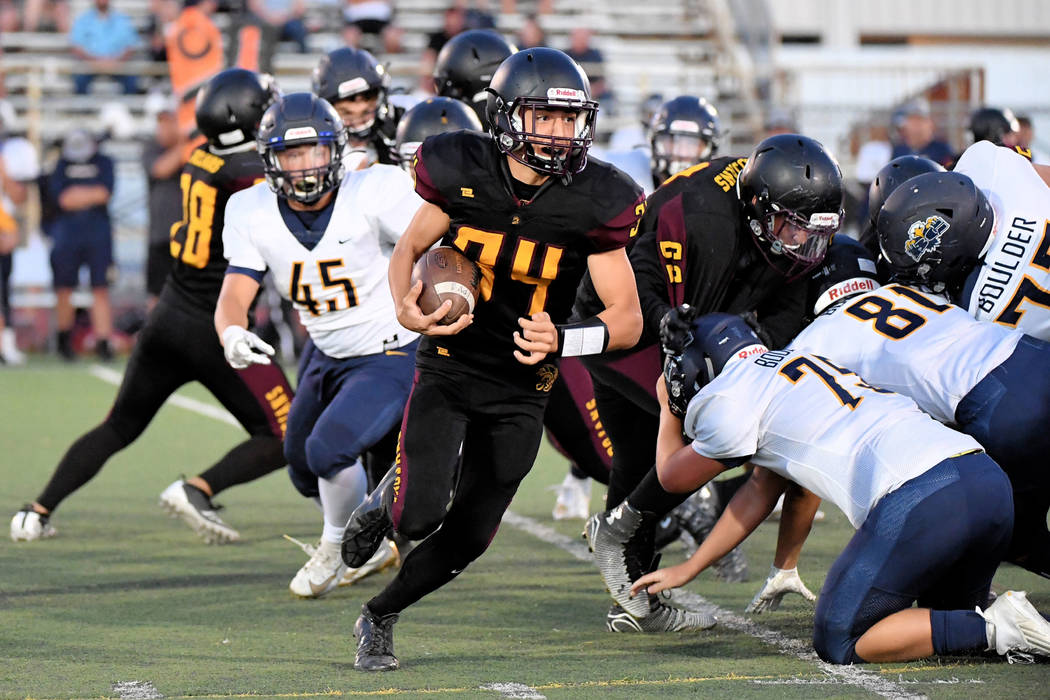 The similarities between the 2018 and 2019 Pahrump Valley High School football seasons are getting out of hand.

Just as they did last year, a wild come-from-ahead loss followed by a physical defeat followed by a routine victory led to Boulder City’s place on the schedule, and for the second year in a row a tough-to-swallow defeat left the Trojans 1-3.

The only successful conversion of the game, a 2-point pass from Parker Reynolds to Scott Bahde, provided the deciding points Friday night as Boulder City handed Pahrump Valley a 20-18 loss in double overtime at Trojan Field.

But the most significant number in the game wasn’t 20 or 18, it was 26. That was the number of penalties called in the game, and the flag-happy officials had a greater effect on the Trojans than on the Eagles.

“What we noticed, and what we were so frustrated about, is that our boys dominated them physically, and in some cases when our boys would push them down to the turf and then fall on top of them, a flag would be thrown,” Pahrump Valley coach Joe Clayton said. “We were getting holding penalties because our boys were doing what we taught them to do.”

One drive in particular sums up Clayton’s point. After a Boulder City fumble — one of four in the game to one turnover for the Trojans — Pahrump Valley took over on the BC 20-yard line with the game tied at 12-12 early in the fourth quarter. Jalen Denton’s 4-yard run would have set up a third-and-3 from the 13, but holding turned it into second-and-20. On the very next play, Kody Peugh, who led the Trojans with 57 yards on 14 carries, took a pitch right and rumbled inside the 10-yard line, and that was called back by a holding penalty.

Despite a 10-yard halfback pass from Dylan Wright to Andrew Avena, the Trojans wound up facing fourth-and-5 from the 15, and the Eagles responded, stuffing the Trojans for a 2-yard loss and taking over on downs.

“It wasn’t that the officiating was lopsided, it was horrible on both sides,” Clayton said. “I talked to their head coach, and we agreed it was atrocious. The problem is it affects us more because of what we do offensively.”

Pahrump Valley finished with 150 yards rushing and would have approached 200 without five holding penalties. (Others were declined.) The Eagles rushed for 100 yards, but their short passing game was effective. Boulder City quarterback Parker Reynolds completed 17 of 27 passes for 210 yards and two touchdowns and rushed for the other Eagles score.

But the best moments for each team came on defense during short-yardage situations. From the start of the fourth quarter on, the Eagles and Trojans each came close to scoring what could have been the decisive touchdown only to find the other side form a brick wall and shut down the play.

Next came two incompletions — one nearly intercepted by Tyler Clayton — before Reynolds scrambled left, reaching out to try and hit the pylon with the ball. He was ruled out at the 1, and the swarming Trojans stopped a keeper on fourth down. It took several minutes for the officials to decide the play, but Reynolds was called down at the 1 with less than a minute left in regulation.

“It was so unfortunate the way the game went, but how can you not be excited for the boys when they have three stops inside the 1 -yard line?” Clayton said. “The defense since Lowry has been phenomenal. Their effort, their tackling was the best we’ve had all season. That has been a focus of ours. We couldn’t be more excited defensively. The defense just kept us in the game.”

The Eagles returned the favor in overtime, stopping Trojans quarterback Roman Roberts on fourth down from the 1, but the fourth Boulder City fumble of the game — after another long meeting to decide what happened — sent the game to a second overtime. This time it took the Eagles one play to score, as Reynolds hit Deavin Lopez for a 10-yard touchdown and then found Bahde for the conversion.

Denton answered with a 7-yard run on the Trojans’ second OT possession, but the Eagles again rose to the occasion, stopping Kenny Delker on the conversion run to end the game.

Delker had scored the Trojans’ first touchdown, capping their opening 11-play, 56-yard drive with a 9-yard run. The drive was started by a Boulder City fumble on the second play from scrimmage and kept alive by a roughing-the-passer penalty on a fourth-down pass that fell incomplete. Two holding penalties were called during the drive, each of which had the Pahrump Valley sideline in an uproar, setting the tone for the rest of the game.

“When they left the field Friday night, considering what took place and what was stolen from them, their spirits were high,” Clayton said of his players. “They knew they played well. We felt really good about how hard they played.”

Next up for the Trojans is Class 4A Coronado at 7 p.m. Friday in Henderson.