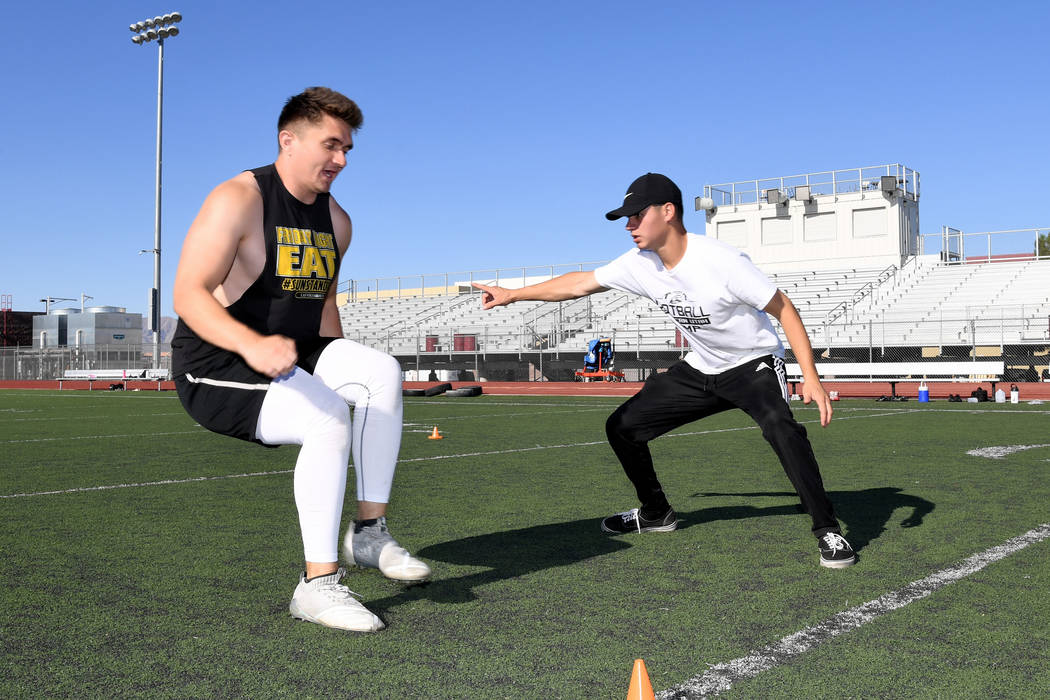 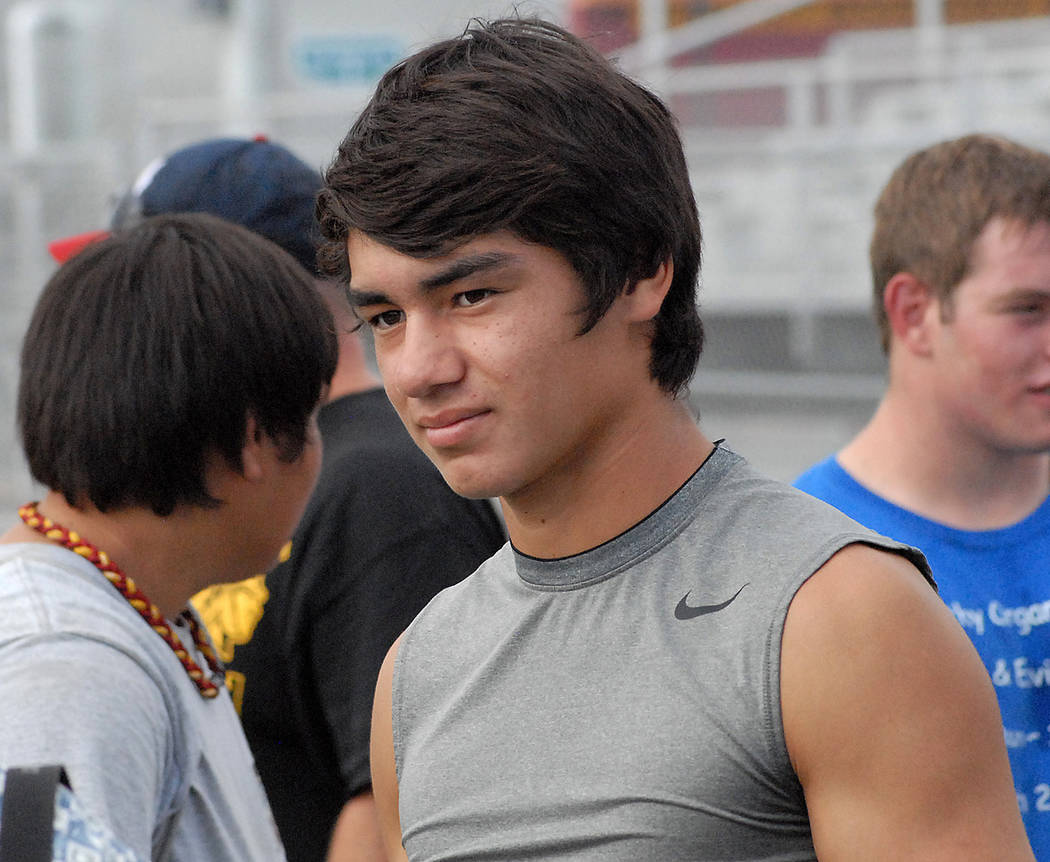 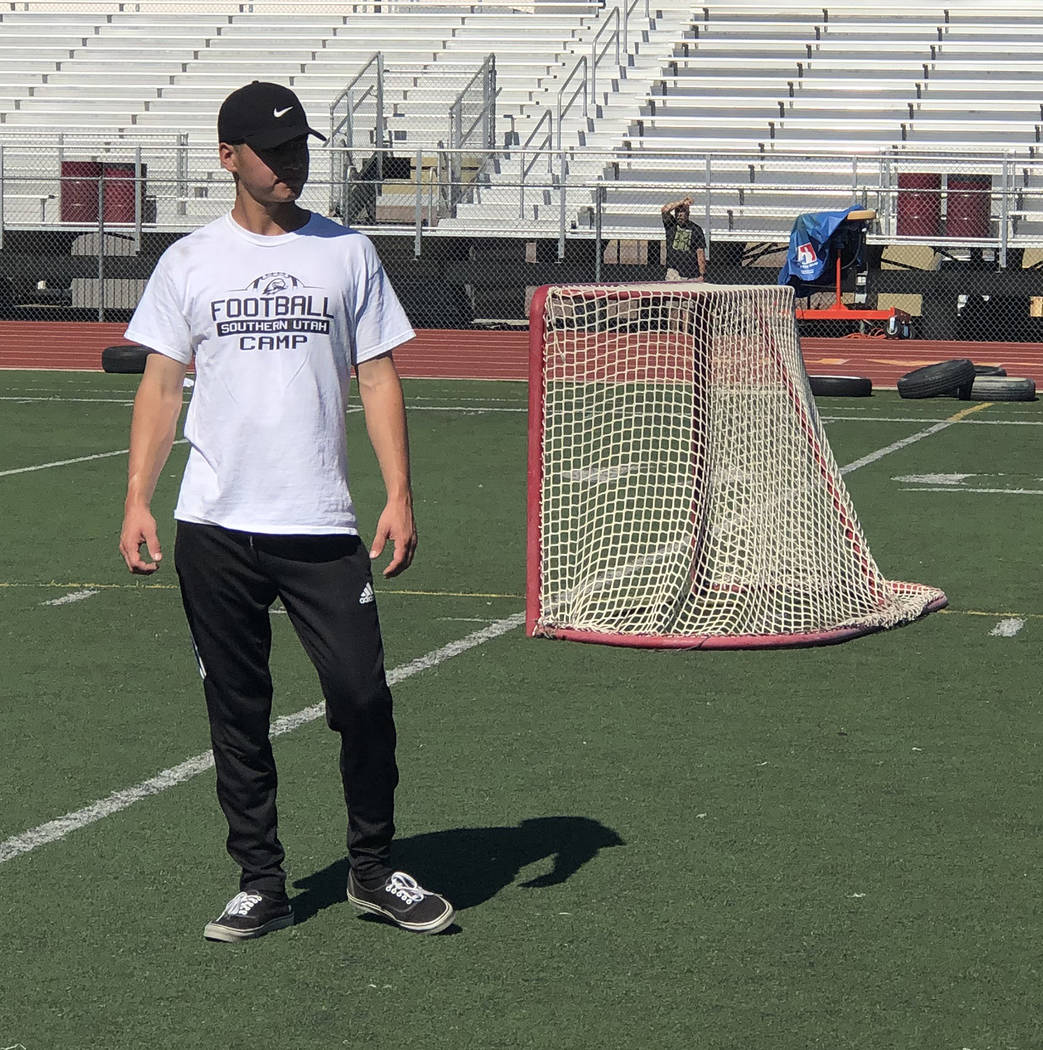 Tom Rysinski/Pahrump Valley Times AJ Segura, who last played for Pahrump Valley High School in 2013, is back at Trojan Field as an assistant coach under Joe Clayton, coaching quarterbacks, defensive backs and the freshmen. 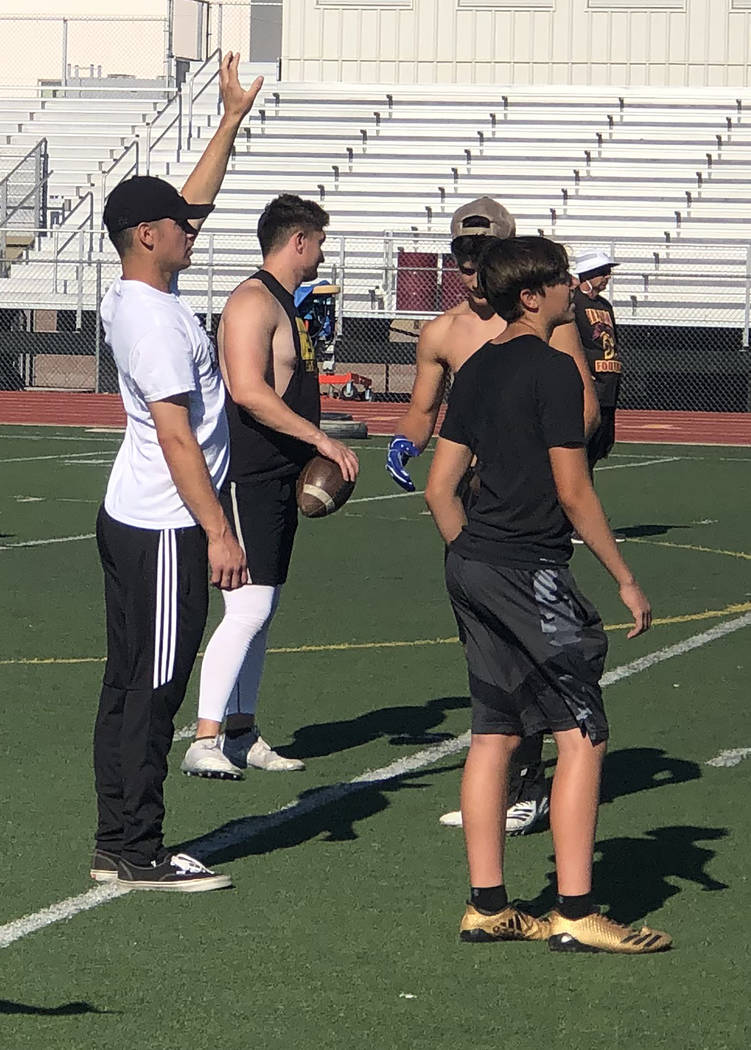 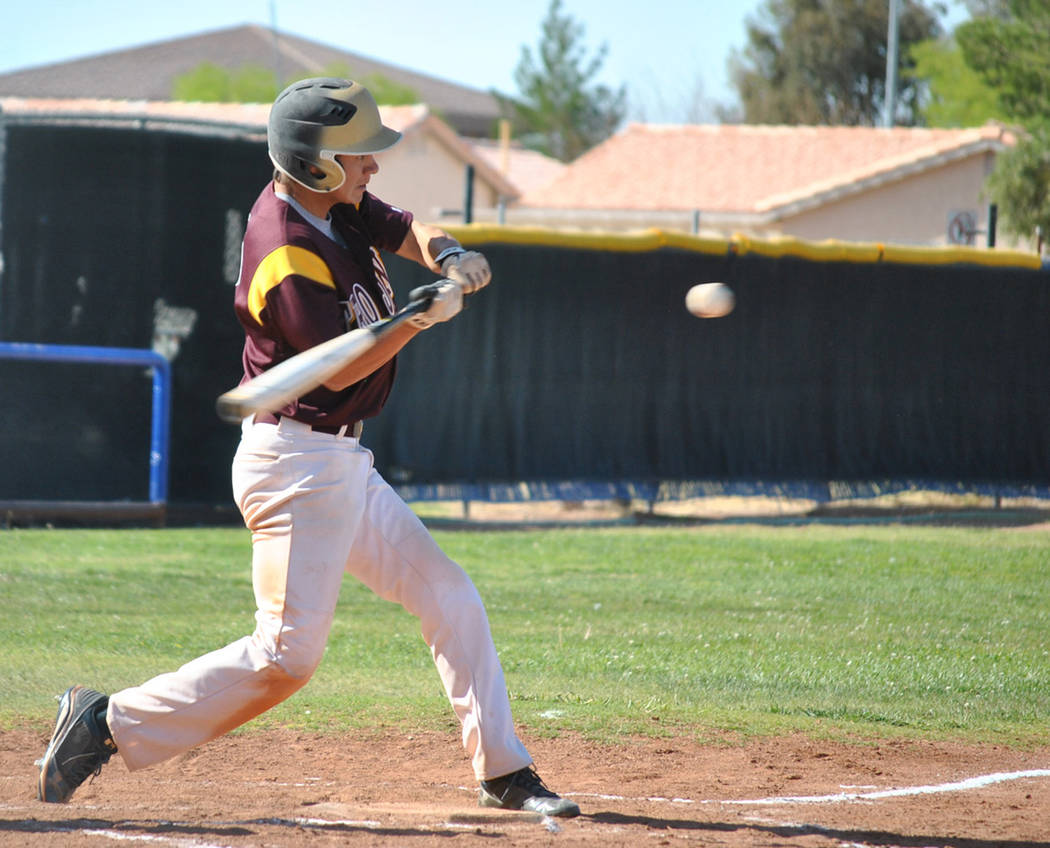 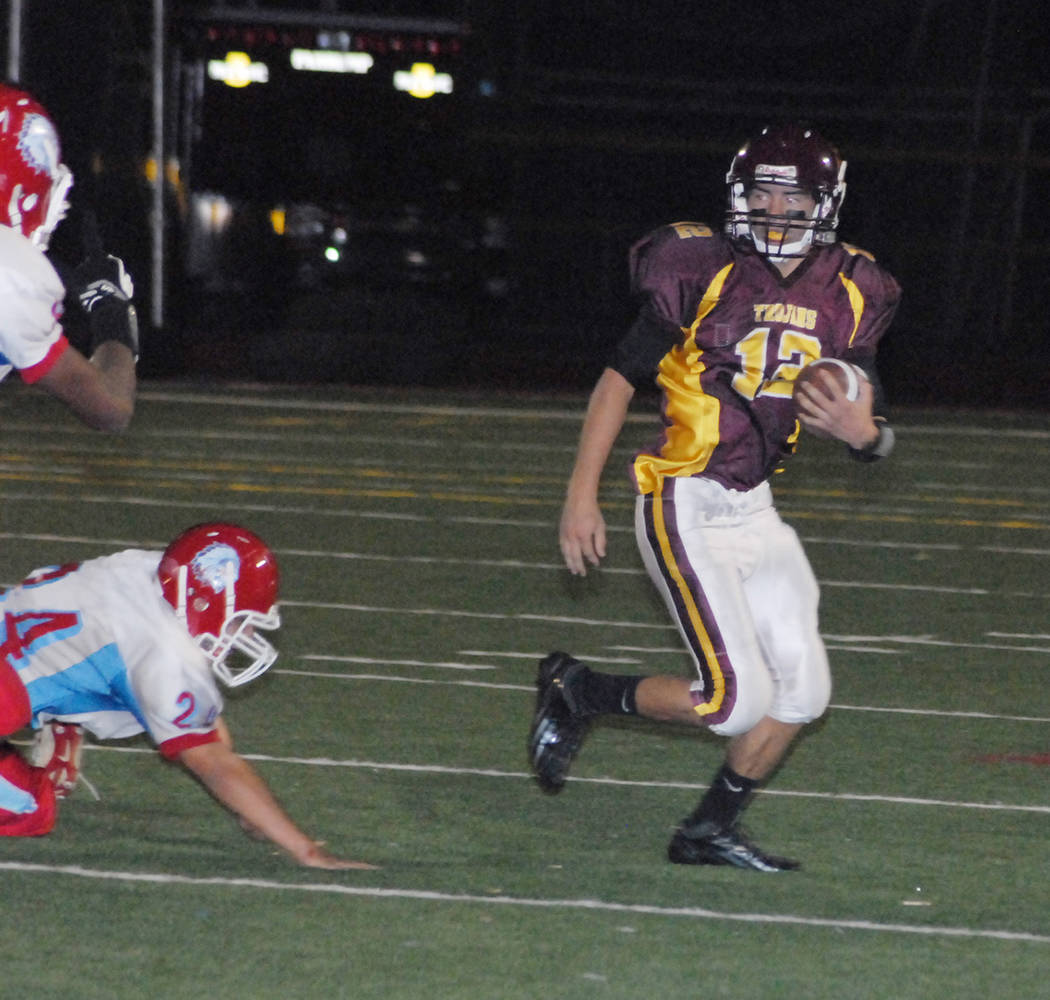 Horace Langford Jr./Pahrump Valley Times During his senior year at Pahrump Valley High School, AJ Segura was moved to running back and slot receiver to take more advantage of his athletic ability.

The new guy on the sidelines during Pahrump Valley High School football games will be a very familiar face to the veteran coaches he is joining.

AJ Segura, a 2014 graduate of the school, has signed on to be the head freshman coach as well as a quarterbacks and defensive backs coach for the Trojans, and head coach Joe Clayton couldn’t be happier.

“We’ve coached a long time together, but we always agree that it’s nice to bring some new energy into a coaching staff,” Clayton said. “Some new ideas, a little bit younger mentality, might be able to relate to the kids a little bit better. We thought AJ was a perfect kid because he ran our system, he knows what we do.”

Segura quarterbacked the Trojans during Clayton’s early years with the program, putting up 827 passing yards and a team-leading 361 rushing yards as a junior. His athletic ability caused Clayton to move him out from under center during his senior season.

“He was explosive, flashy, quick,” Clayton said. “He’s one of those kids that we don’t see much of. We win with numbers and strength and hard work, and he was always one of those kids that had natural athletic ability. He played at quarterback, and then he split time with TJ (Milk) so we could have AJ’s ability as a wideout. He would win games for you.”

But Segura knows the Pahrump Valley program bears little resemblance to the one played for six years ago.

“I love my guys, but this is just light years ahead of what it was,” Segura said after a morning practice. “The coaches have spent a few years with this offense in this program, and they’ve made their adjustments so they really know what they’re doing.”

This year’s freshman class is a big one, which Segura estimated at 25 to 30 players. The Trojans’ Sunset League championship last year undoubtedly encouraged a few more kids to come out this year.

“For sure,” he acknowledged. “Any time you have success and you see the crowd we get on Friday night, I think any kid would want to be a part of that.”

Segura spent time playing junior college baseball in California, getting his associate’s degree in the process, and worked for his uncle for a while. He moved back to Las Vegas for a year and then recently came back to Pahrump to take a look at where he was and where he wanted to go.

“One day about a month after I got back Coach Clayton asked if I was going to here in the fall, and that’s when the opportunity kind of presented itself,” Segura said. “I was kind of nervous because it’s tough to find a job that’s willing to cooperate with a coaching schedule. Luckily I was able to find one, a good one, and I’m just happy to be here.”

The feeling is mutual.

“I think he will be phenomenal,” Clayton said. “He’s shown some really good promise as far as working with the kids. He has some things he can bring to the table just being young that we can’t as an older staff.”

Segura has been most impressed by how hard the Trojans work, which goes back to Clayton’s philosophy about how Pahrump Valley must play to be successful. But the kids are buying in, and Segura already has seen it.

“I’ve really been impressed,” he said. “They all work hard, even the studs. It’s good to see. There isn’t a kid that slacks off, and if there is he’s going to get called out by his teammates. I can’t reiterate enough that when your best players are your hardest workers, it really trickles down. Nobody wants to be left behind.”

And it’s especially impressive when freshmen bring that attitude, since it’s a new experience for them.

“A lot of them have never truly felt pain, especially as a football player,” Segura said. “I think wrestling is the only sport that’s tougher to train for. It’s getting used to that pain and fighting through it and not quitting when it gets hard.”