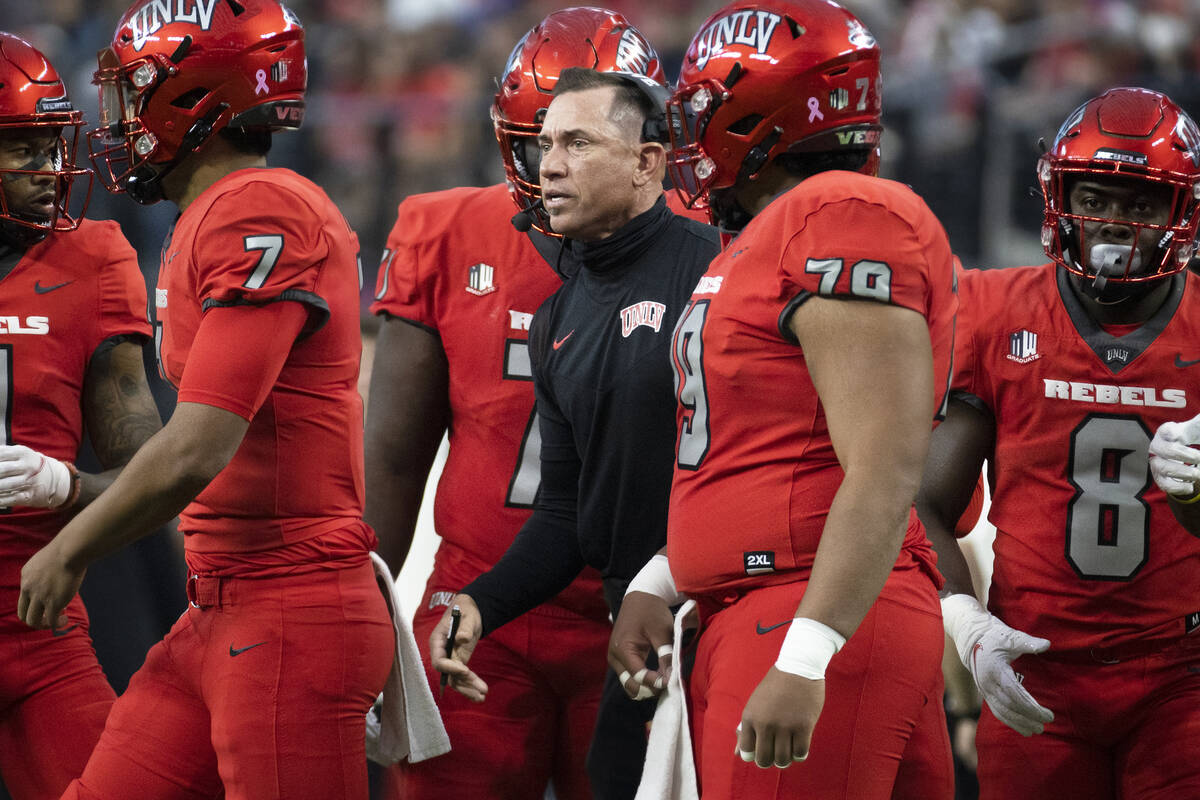 UNLV Rebels head coach Marcus Arroyo, middle, gives direction to his team during a timeout in the first half during an NCAA college football game against Utah State on Saturday, Oct. 16, 2021, at Allegiant Stadium, in Las Vegas. (Benjamin Hager/Las Vegas Review-Journal) @benjaminhphoto

The UNLV Rebels defeated the New Mexico Lobos on Saturday 31-17 for their first win of the season.

Not only was this the first win of the season for the Rebels, it was also the first win for head coach Marcus Arroyo in his time at UNLV. Up to this point, he had been 0-14 as the Rebels head coach, but he has now lifted some of the weight from his shoulders.

On top of getting a win, there was also a record broken. UNLV senior running back Charles Williams broke the all-time UNLV rushing record of 3,733 yards that was held by Tim Cornett since the 2013 season.

With his 22 carries for a total of 74 rushing yards, Williams now sits at 3,758 rushing yards for his career at UNLV. He still has three more games left in his last year of eligibility to gain as many yards as possible to move up the all-time NCAA rushing list.

Freshman quarterback Cameron Friel won the award for Mountain West Conference Freshman of the Week for his performance on Saturday. Friel completed 60% of his passes for 227 yards, including two touchdowns.

Sophomore wide receiver Kyle Williams was Friel’s top target for the day. Williams finished with a season-high 137 receiving yards and tied his season high in catches with seven. He also had a season-long reception of 75 yards that went for a touchdown.

With the offense starting to click, it was time for the defense to come up huge for the Rebels against the Lobos.

After falling behind 7-0 early, UNLV was able to bounce back just before the end of the first quarter with a touchdown to tie the game at 7 apiece after they forced a fumble by the Lobos offense. The Rebels defense forced three fumbles during the game and made all three turnovers count, as they scored a combined 17 points off of the turnovers.

In addition to the three caused turnovers, the defense was able to get to the Lobos’ quarterbacks all game long. The Rebels had a season-high eight sacks to go along with their season-high 11 tackles for loss. This was the first game all season that UNLV held an opponent scoreless for an entire half.

New Mexico’s two freshmen quarterbacks combined to go 10 for 16 on pass attempts with just 36 total yards and one touchdown.

Their offense was led by their rushing game, which consisted of eight different people registering rushing attempts. Their 48 total rushing attempts combined for a total of 260 rushing yards.

UNLV plays their next game this Saturday, Nov. 13, when they host the Hawaii Rainbow Warriors in the Ninth Island Showdown. The winner of this matchup takes home the golden pineapple trophy.

Hawaii is coming into this game riding a two-game losing streak and is currently tied with the Rebels for last place in the West division of the Mountain West Conference.

Kickoff is scheduled for 1 p.m.