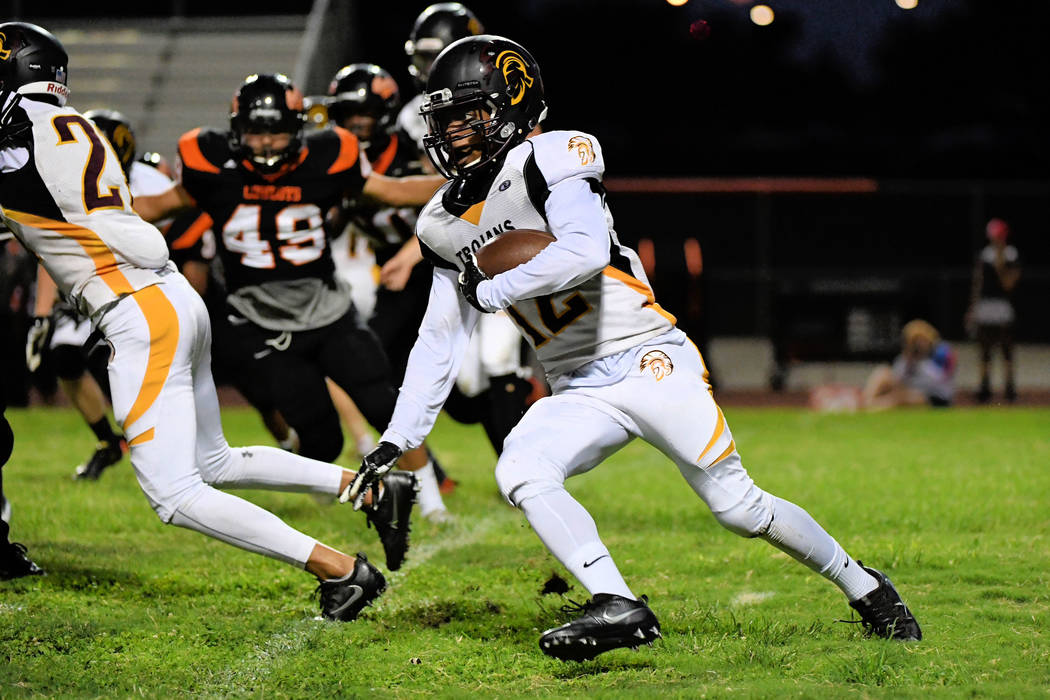 Peter Davis/Special to the Pahrump Valley Times Nickolas Redmond looks for daylight against Chaparral last week. To beat Rancho, the Trojans need to find that daylight in a big way. The Pahrump running game will have to stay in gear to get that victory.

Pahrump Valley Trojans football is looking for their first win at 0-2. Their upcoming opponent is the Rancho High School Rams (0-1) , who in the past have been outscored by their opponents 401 to 50 and have not won a game since since Oct. 23, 2015 when they beat Del Sol 16-14.

Rams coach Gary Maki returns as head coach. He has spent the last four years as head coach at Del Sol and probably will do that at Rancho so he will be familiar with the Trojans offense. But regardless who is coaching, it remains that Rancho has problems. They lost their opener to Western, who beat them 20-0. Western too is under a new coach, but had not won a game since 2010.

In that game, Rancho had 79 total yards offense. They rushed for 68 yards and passed for 11. Their lead rusher is Jeremiah Bell, who had 53-yards rushing.

The Rancho defense gave up 337-total yards, 158-yards rushing and 179-yards passing. Pahrump Valley will be looking to capitalize on the Rancho poor rushing defense.

The Trojans offense was alive and well against Durango, but hit a brick wall against Chaparral. Against the Cowboys the team had just 153 yards. Chaparral has a solid core of players and their team went to state last year.

Senior quarterback Dylan Coffman passed for 53 yards and the Trojans rushed for 100 yards. If the team is to beat Rancho, the offense will have to get into a rhythm and churn out some yards. Trojans coach Joe Clayton said his defense plays better when the offense controls the ball. The Las Vegas Sun is picking Pahrump to win. The Pahrump Valley Times agrees, this one should be a resounding victory.