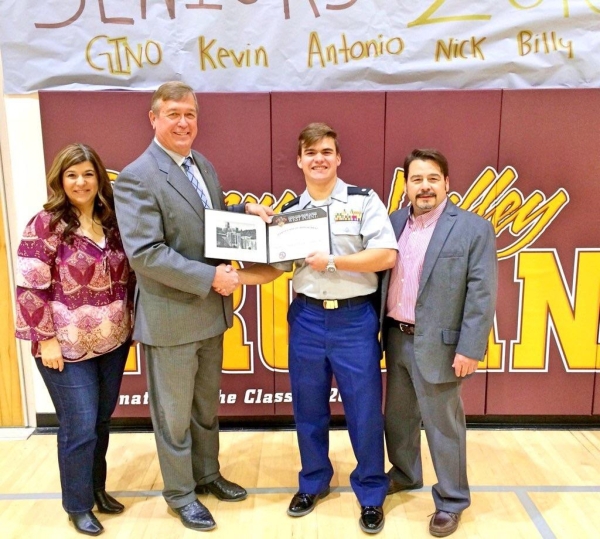 The wait is over for Trojans running back, senior Tommy Gascoigne, who was notified officially that he will be attending West Point, the United States Military Academy for the Army in the fall.

West Point is located on the Hudson River in upstate New York.

“I was told by West Point that I was the first from Pahrump Valley High School,” Gascoigne said. “My congressman said it was very rare that anyone from Nevada gets selected out of high school. I was the primary nomination from Nevada.”

Pahrump has had some students selected to attend military academies like the Citadel, and some former PVHS students have attended a semester at UNLV or served in the military and then went to an academy.

“Now that I have the nomination I am going to try to walk on the team and get a special teams position,” Gascoigne said. “I will also be sending them a highlight reel.”

He said he wanted to thank all the teachers that pushed him and got him to this point.

“I also want to thank my mother and father for pushing me so hard,” he said.

Gascoigne said after West Point he wants to serve with a special forces outfit.

His former football coach from his junior year, Joe Clayton, wasn’t surprised at the news.

“Since the first year I coached Tommy when he was 8 years old, I knew there was something special about this kid,” Clayton said. “At the time, though, I didn’t realize that he would be so special that he would reach his dream of making it to West Point.”

Clayton added that Gascoigne has a way about him “that puts a smile on your face.”

“If you were ever lucky enough to spend a few minutes talking to him, you would understand what I mean,” the coach said. “He is loved by his classmates, teammates, coaches, and all adults alike. His calm but funny personality is infectious, which I always found intriguing, especially when I would watch him run the football as a tough, tenacious, hard-nosed fullback for the varsity football team the last couple of years. He could “flip the switch” better than anyone.”

Clayton said that during Gascoigne’s junior year he received honors as a running back.