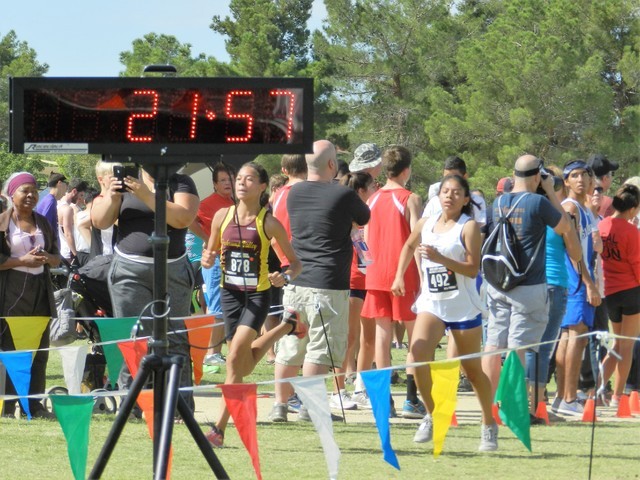 Special to the Pahrump Valley Times Diamond Sonerholm crosses the finish line at the Larry Burgess Invitational last Saturday. The freshman runner took second place at the four-school meet at Cheyenne on Tuesday. 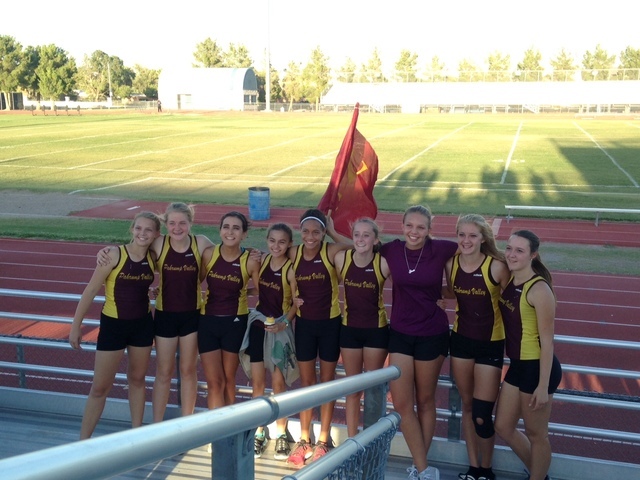 The Trojans girls cross-country team turned in a solid performance as five runners finished in the top 10 runners out of four teams to take the Sunset League meet at Cheyenne on Tuesday.

Pahrump edged Desert Pines by one point to win their first meet in years.

“I think the last win they got was when I was an assistant coach,” Trojans coach Matt Kolodzieczyk said. “That was four or five years ago.”

Does this mean the Trojans girls are the team to beat?

“We are in a good position to do something special,” he said. “In the other league, Tech is a strong school along with Boulder City and Desert Pines.” He also said the North has some pretty tough runners too.

The coach thinks the northern runners are tough because of the high altitude training they get.

“When we go up there they definitely have an advantage,” Kolodzieczyk said. “I think when they come down here like this year though, we have the advantage, especially if it’s hot.”

Bryce Odegard’s first place out of 38 runners (17:06) helped the Trojans boysto victory (29 points) over four teams at the Cheyenne Weekday Meet on Tuesday.

Koldzieczyk said the boys are running without Layron Sonerholm, the second best runner on the team. Sonerholm has a badly sprained ankle sustained at the Labor Day Classic.

“He was bumped and he landed awkwardly on it,” the coach said.

The coach is excited about this year, but says his team has to “stay humble and stay healthy.”

“Last year Tech was the number one team in the Southern Division, but I think they were a little surprised to see us come out,” he said.

Sonerholm should return either at the Mojave meet or the Foothill meet, depending on how he feels.