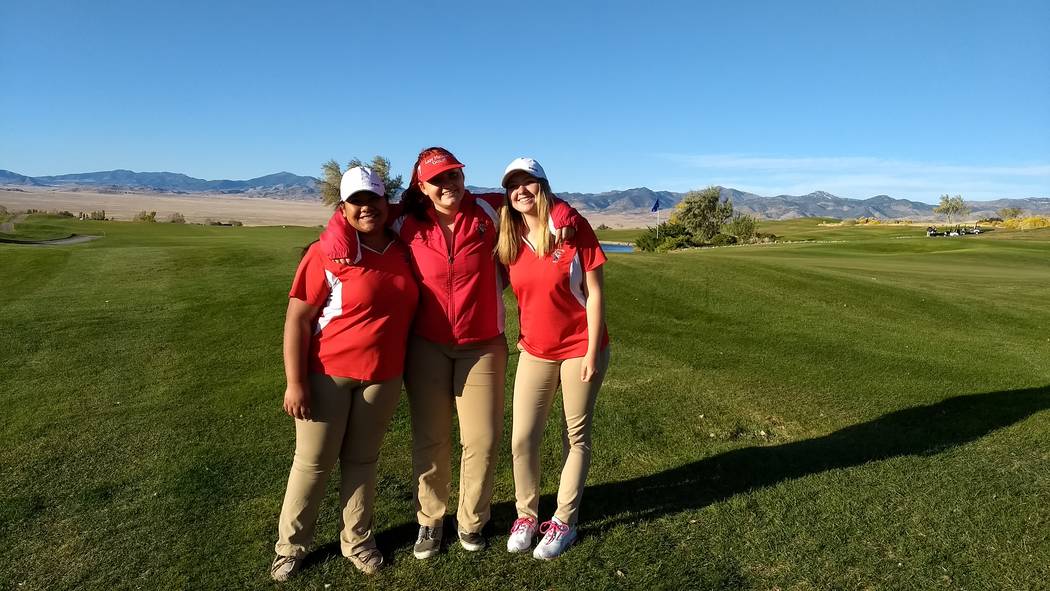 Penny Otteson/Special to the Pahrump Valley Times Members of the Tonopah girls golf team that went to the Nevada Class 2A State Golf Championship at West Wendover, at the Toana Vista Golf Course on Oct. 9-10. From left to right, Angelina Camacho, Skyla Ogilvie and Alayna Palmeiri.

The championship was played at the Toana Vista Golf Course from Oct. 9-10.

“None of these girls had ever played golf before we started the season, but the girls worked very hard to get better and they did improve a ton over the year. I wish we had a junior golf program so these girls would have some experience before they show up to play.”

Tonopah did not have a team score but the girls did have individual scores. The low round for the Lady Muckers golfers was turned in by Skyla Ogilvie with a 165 on the second day of the two-day state tournament.

The Tonopah Lady Muckers played a tournament in Round Mountain, Wells, Elko and Battle Mountain during the season. “The girls had a lot of fun and the girls who are returning are looking forward to another great season, we are hoping to have a summer junior program to maybe get the girls a little more time on the course,” said Otteson.

“I would also like to thank my assistant coach, Carrie Otteson, for her help throughout the season, Rick Melton for his help and Steve Stringer, for all of his help with our team.”

Also on the team this season but unable to attend play in the state tournament were Alyssa Palmeri and Jade Owens Maxwell. Both will return as part of the team next season.