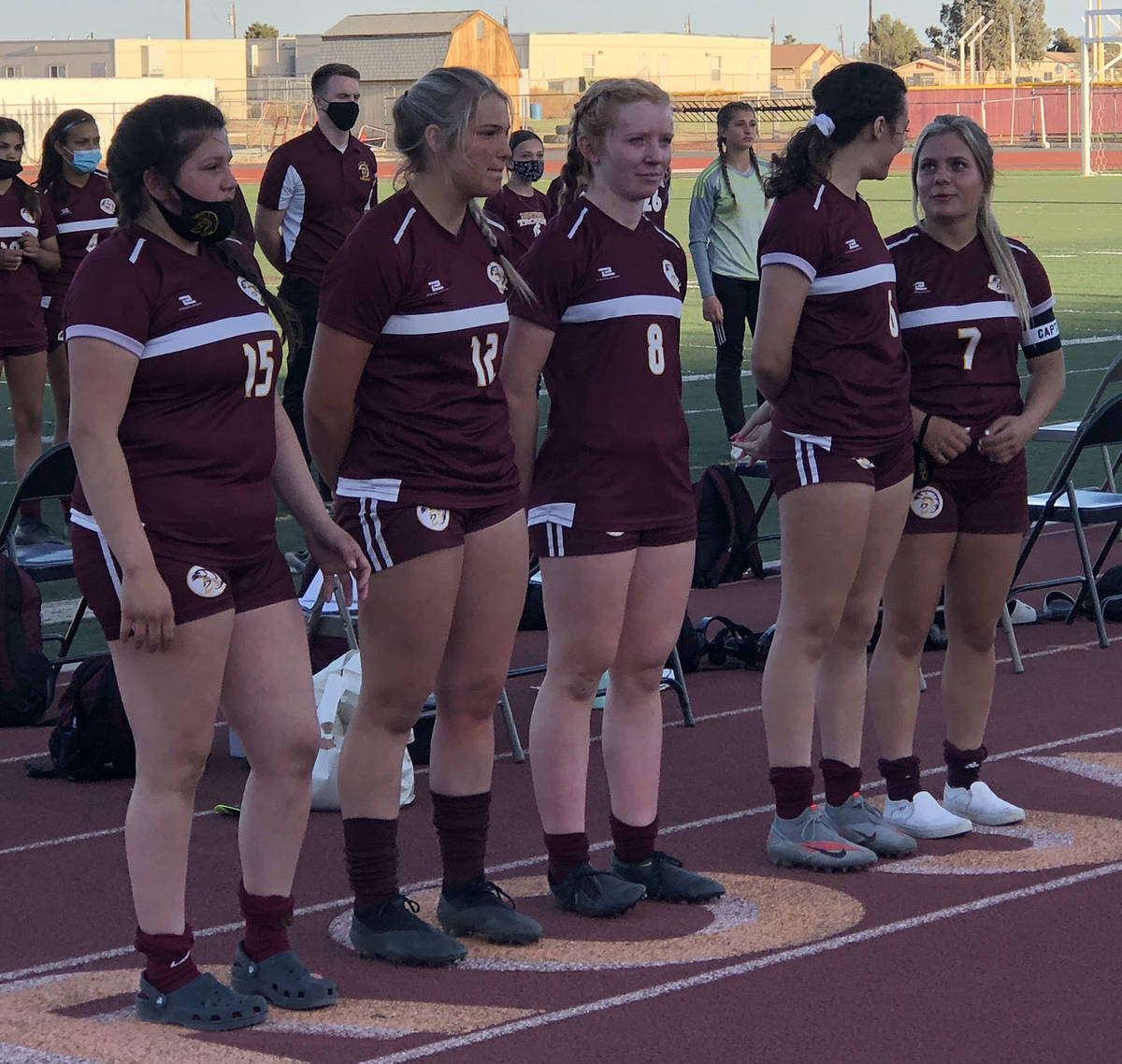 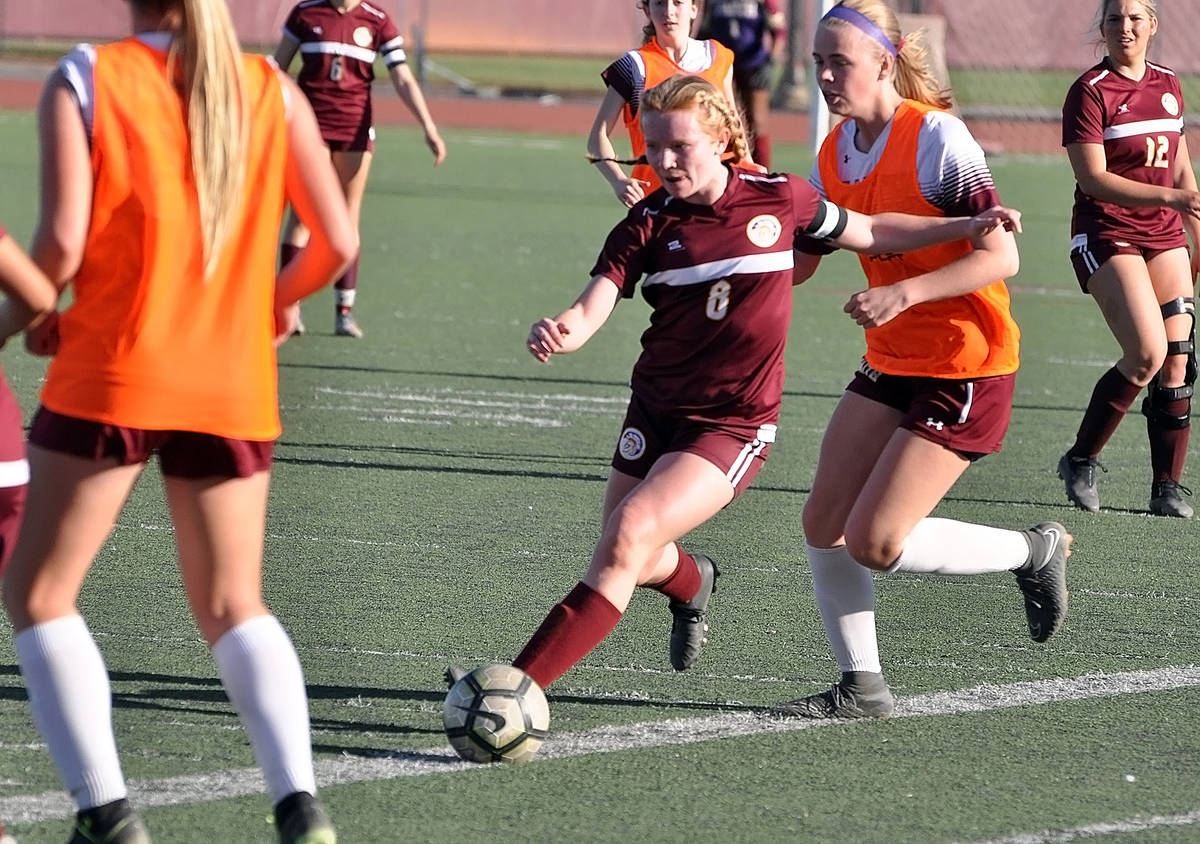 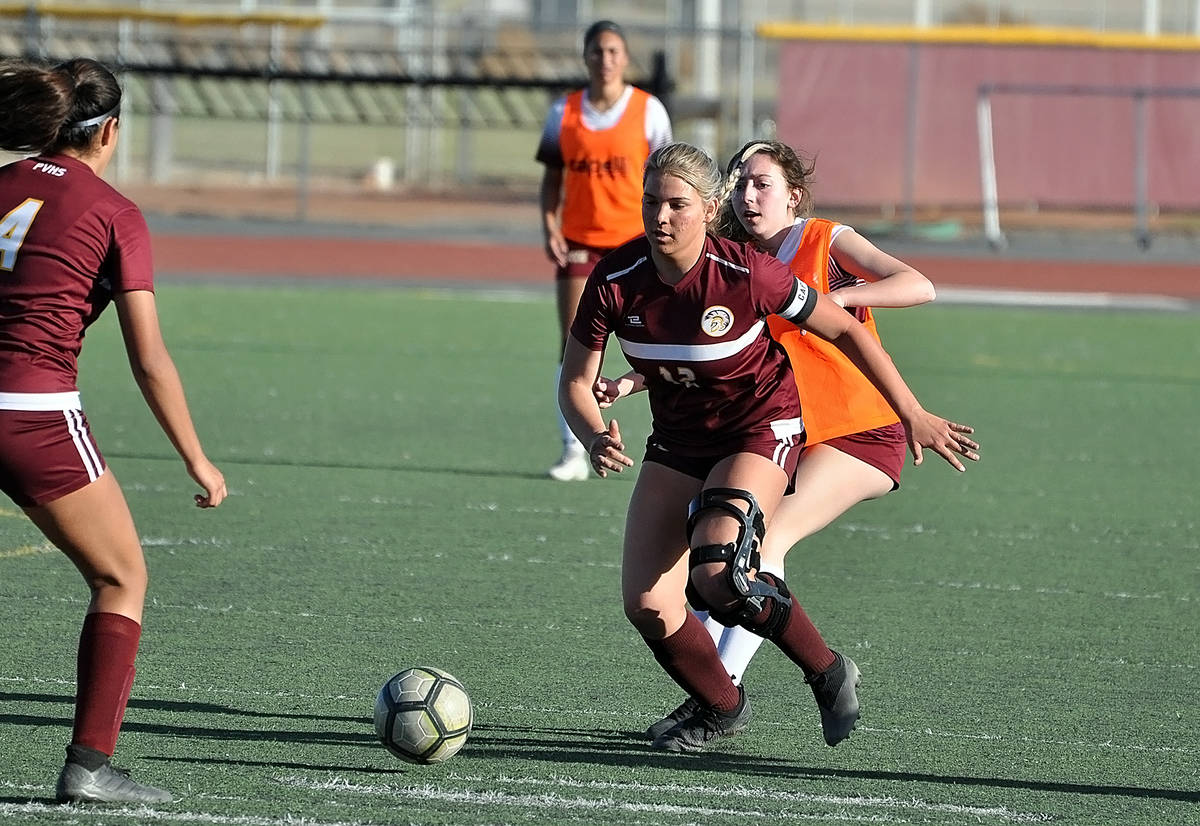 Horace Langford Jr./Pahrump Valley Times Senior Maddy Souza controls the ball for Pahrump Valley against Faith Lutheran during a high school soccer game Tuesday at Trojan Field. Souza was one of five seniors who were honored after the game on senior day. 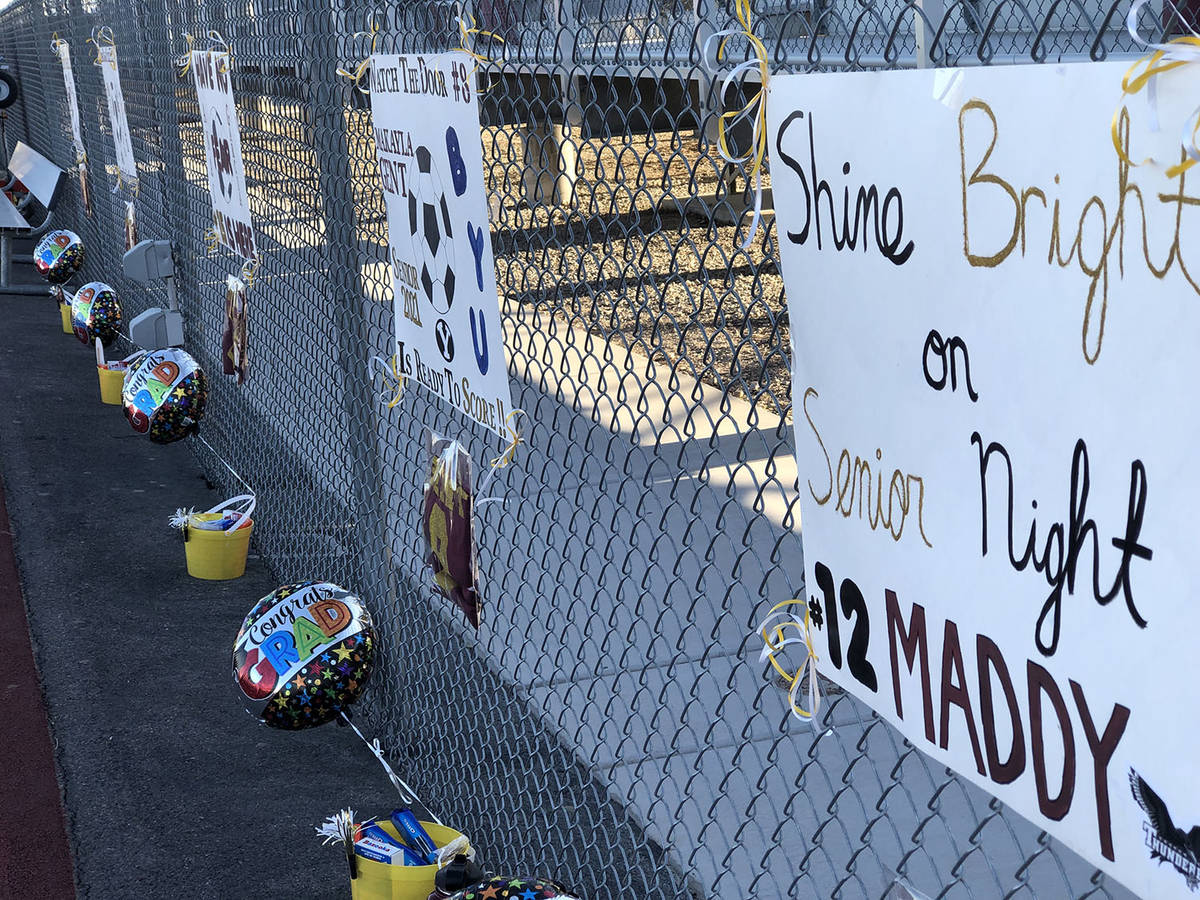 Tom Rysinski/Pahrump Valley Times Signs celebrating each of the five seniors on the Pahrump Valley High School girls soccer team hang on the fence Tuesday, which was senior day at Trojan Field.

Maybe some parents should start asking their soccer-playing daughters that question, because asking Pahrump Valley High School’s graduating seniors on senior day about their best memories of playing soccer in high school always seems to steer the conversation toward bus rides.

“Trips, honestly, staying overnight, having a good time with your teammates and bonding and bus rides,” said Maddy Souza, who is on her way to Casper College in Wyoming to study fire science. “Actually, the bus rides, all-time favorite thing ever. I’ve learned everything about life from bus rides.”

There are several ways to interpret that, most of them troubling.

“I can’t expose our secrets,” Ally Rily joked when asked about the bus rides. “Everyone loves the bus rides. They are the best times. We play music, we sing together, we jam out together. We always bond together, we’re always talking. That’s where we get really close because we have to ride the whole way together.”

Rily recently announced she will sign to play softball at Chandler-Gilbert Community College in Arizona, with plans to study radiology and criminal justice. Fellow senior Anai Garcia plans to go to college as well, but not just yet. Garcia wants to spend some time traveling with her 1-year-old daughter, Ximena, before possibly studying medicine.

But while being a mom might set her apart from her teammates, she is right with them when talking about her memories.

“Definitely the bus rides,” Garcia said. “Just talking about how our game went, and then we end up having fun.”

Meanwhile, Kaylee Mendoza cites one specific trip as the highlight of her time with the Trojans.

“Last year at our Lake Tahoe tournament the team bonded really well and we did amazing in our games and it was just a blast,” she said.

That trip was a blast for her and her team. The Trojans posted wins over Lowry (7-4) and Churchill County (5-1) and ties against Spring Creek (1-1) and Elko (0-0). Mendoza scored four goals — two on penalty kicks — against the Buckaroos.

Mendoza plans to become an ultrasound technician — “It’s so fun, and you see babies!” — and said “probably UNLV” is her college destination.

All of those plans for the future are music to the ears of Trojans coach Julie Carrington, and a lot more fun to think about than the result of Tuesday’s game. Three weeks after playing a competitive game in a 2-0 loss to undefeated Faith Lutheran in Las Vegas, the Trojans were not competitive at all in an 8-0 loss at home.

“It just seemed slow to me,” Carrington said. “I think the last game we played against them we were a lot more on point and moved together as a team, while today it seemed like we just didn’t pull together like we normally do.”

Most of the Crusaders’ goals were routine, with simple passes and easy shots repeatedly finding the net. Meanwhile, the Trojans could do very little, perhaps not surprising against a team that has allowed one goal over seven games.

“We had maybe one good shot on goal and a couple of could’ve-beens,” Carrington said.

Carrington believes her team can take something from their 4-3-1 campaign.

“It’s always a learning thing,” she said. “It was great to have them at least play together one last year. Watching them grow up playing together, it was great to see how all of those seniors were able to play throughout their careers.

“All in all, it was a really good training session kind of thing. And we are on top of 3A, I just want to say that. I’ll take it.”

That part is true. MaxPreps ranks the Trojans as the best team in Class 3A South, trailing only northern teams Spring Creek, South Tahoe and Churchill County in the Class 3A rankings. And the two Southern Nevada 3A teams behind them — No. 6 Moapa Valley and No. 8 Virgin Valley — are teams the Trojans have outscored 11-0 over four games.

So the final record is 4-3-1, with two losses to Faith Lutheran and one to Bishop Gorman.

“You have to play better teams to be better,” Carrington said. “Now they know.”