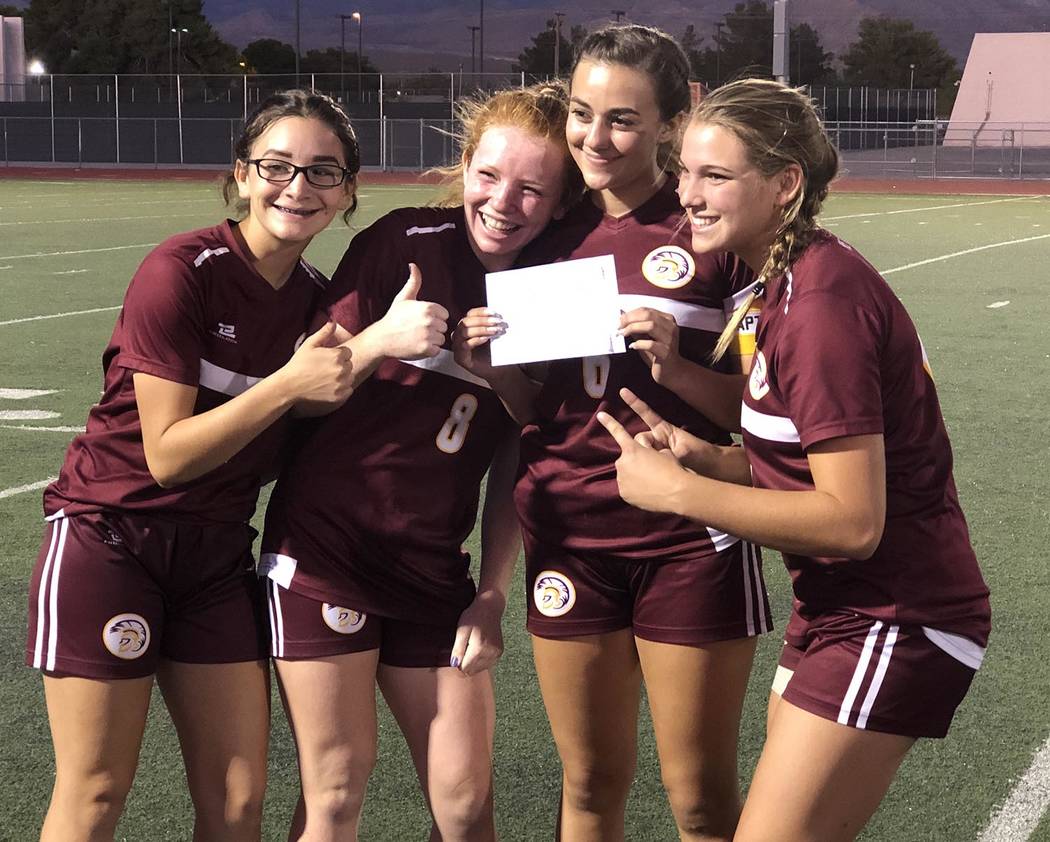 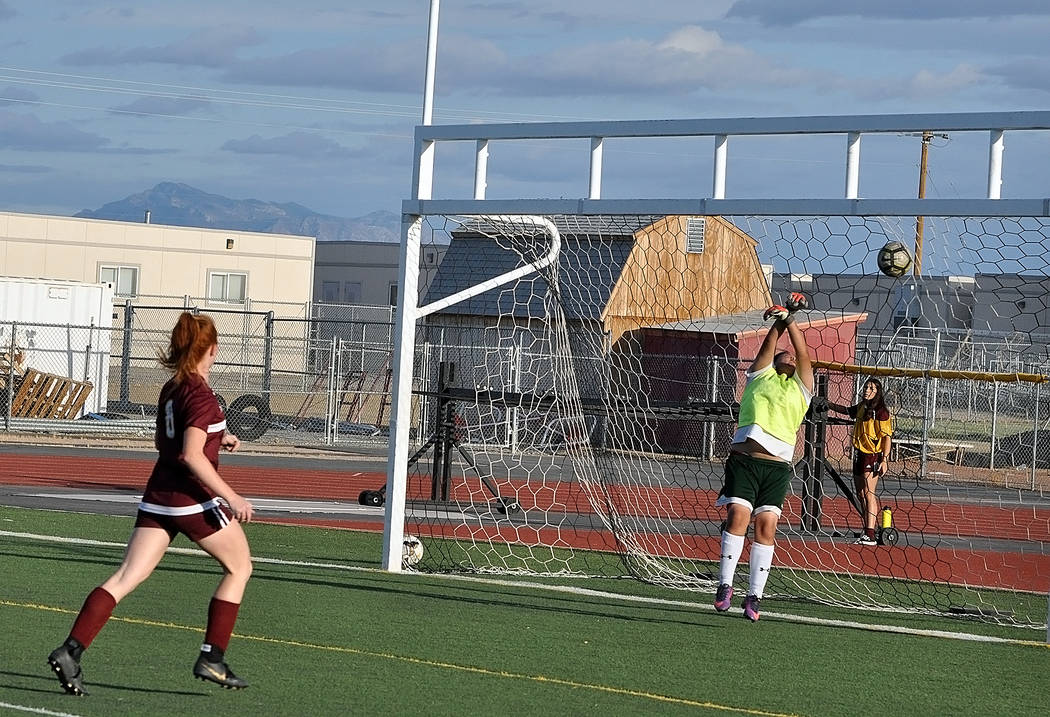 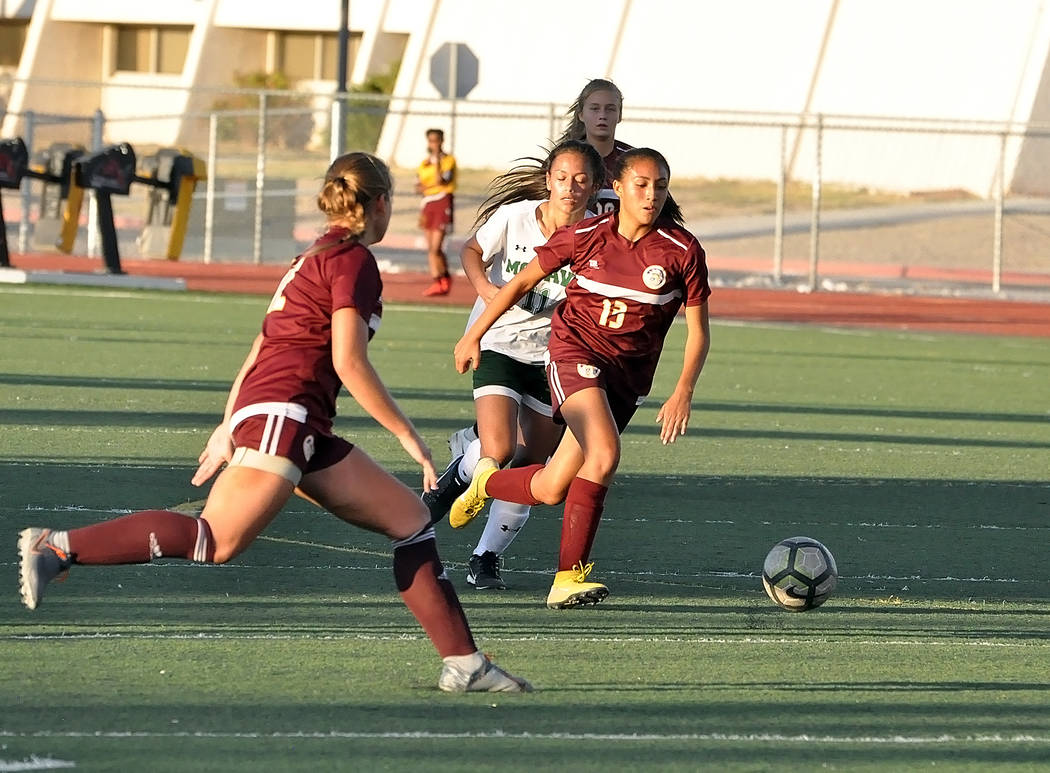 Horace Langford Jr./Pahrump Valley Times Pahrump Valley's Gabrielle Kullmann (13) maneuvers past a Mojave defender as Maddy Souza moves in on the play during the Trojans' 12-1 rout of the Rattlers on Thursday. 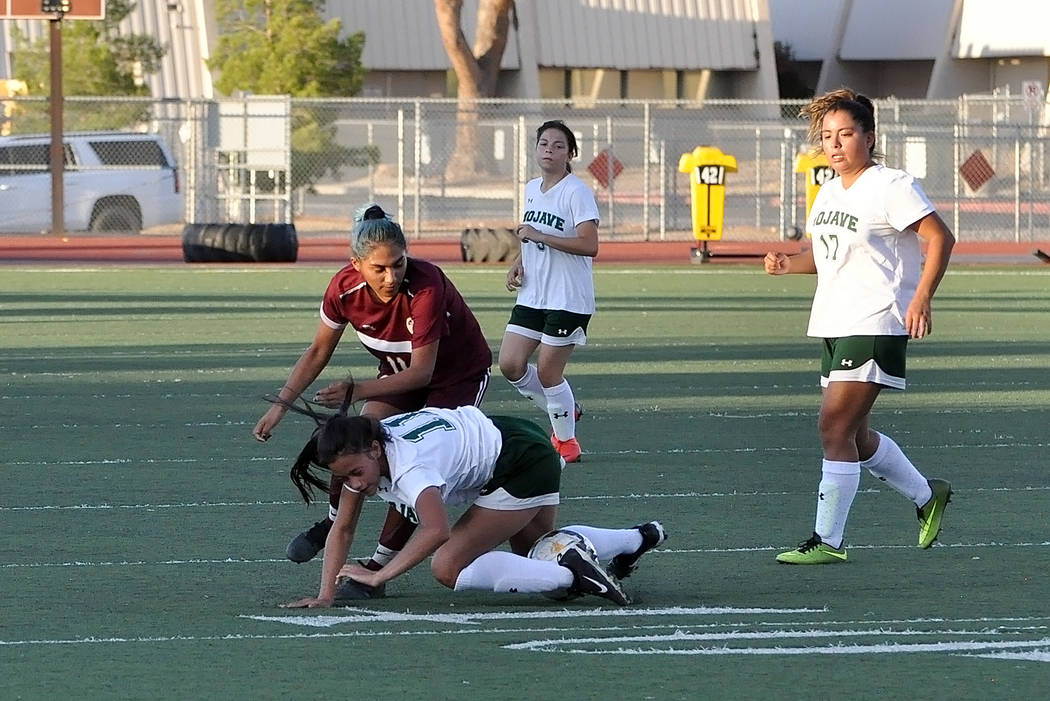 It’s not easy to make a routine 12-1 rout of another overmatched Sunset League foe interesting, but the Pahrump Valley High School girls soccer team found a way to make it happen.

Adryanna Avena-Caraballo, Kaylee Mendoza, Makayla Gent and Maddy Souza each recorded a hat trick Thursday as the Trojans rolled to a 12-1 victory over Mojave at Trojan Field.

“The least likely candidate to have a hat trick was probably Makayla Gent, because Makayla Gent is taught to cross,” Pahrump Valley coach Julie Carrington said. “For her to actually take that time to shoot — and we keep telling her, ‘You’re wide open’ — is pretty big for her.”

The pass-first mentality was on display after one of the early goals, as Carrington asked Gent for confirmation on which of the players in traffic in front of the net scored.

The assists were spread out a bit more than the goals, with Kiara Ramos getting two and Gent, Souza, Mendoza, Avena-Caraballo, Gabrielle Kullman and Zoe Bentley each posting one. The rout left Pahrump Valley at 8-2-3 overall, 2-0 in the Sunset, while Mojave fell to 0-8 and 0-1.

Mojave has allowed 64 goals in those eight games, scoring just seven. The Rattlers have been shut out twice and have scored more than one goal just once, in a 5-2 loss to SLAM Academy two weeks ago.

What amounted to a controlled scrimmage served as a chance for the Trojans to get some work in before one of their two big games of the year, the first meeting with Western on Thursday in Las Vegas.

“I feel like mostly when we’re up we try and possess the ball a lot more and work on our passing,” Souza said. “During practice we’ll work on foot skills, and we’re told to do that on the field. Sometimes they don’t go too well, but there are a lot of times you do get it and this is the time we’re supposed to practice that, so we can perfect it for the more difficult games.”

“We try to control the ball more on their side so they don’t have a chance to score on us,” Ramos said. “We play keep away, try to form triangles around them. It’s kind of like my practice for the more aggressive teams.”

Western certainly qualifies, and after the teams split two regular season games last year before the Trojans defeated the Warriors 1-0 on a late goal to win the Class 3A Southern Region title, it’s unlikely the Warriors will be any less aggressive this time around.

“They’re an insanely aggressive team,” Carrington said. “They are verbally aggressive on the field, too. They took out my manager’s knee last year. And they’ve got a bunch of good seniors.”

Carrington is always keenly aware of the class distribution of opponents, and a Trojans team with several freshmen playing key roles going up against a Warriors team with a lot of key seniors will be a concern.

Her players, on the other hand, don’t think much about such details.

“We’ve just got to make sure we don’t get ahead of ourselves, and we don’t get cocky,” Souza said. “We have to leave it all on the field.”

“I think if we just give it our all, we can do it,” the sophomore said. “Anything is possible as long as everyone does what they have to do.”

Playing the way they did against the Rattlers would help, but the Warriors are far more formidable. But good execution in the last game before a key showdown can’t hurt.

“I thought the girls played really offensively this time, whereas in the other games they would get the ball up there and just weren’t holding it as much and getting through the defense,” Carrington said. “I thought the crosses were good, I thought they were right where they had to be, my striker was right where my striker needed to be, and they just followed through.”

Carrington had praise for pretty much everyone on the field, noting the passing game was working well, the corner kicks were effective, and her defenders worked well together. And the winless Rattlers did very little to get in the way.

“They did a lot of kickball, I thought, just to kick it out,” Carrington said.

The Trojans will face the Warriors at 3 p.m. Thursday, with the Warriors making the return trip to Pahrump on Oct. 21.