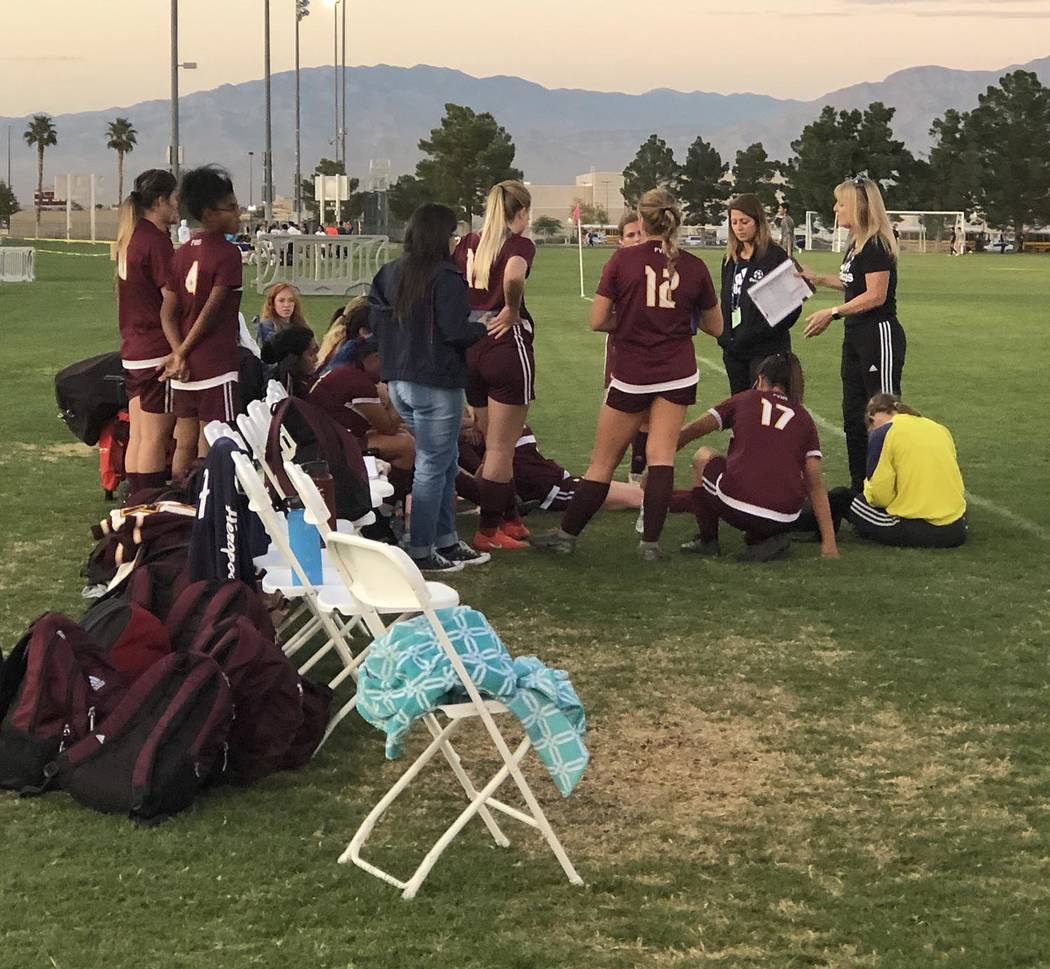 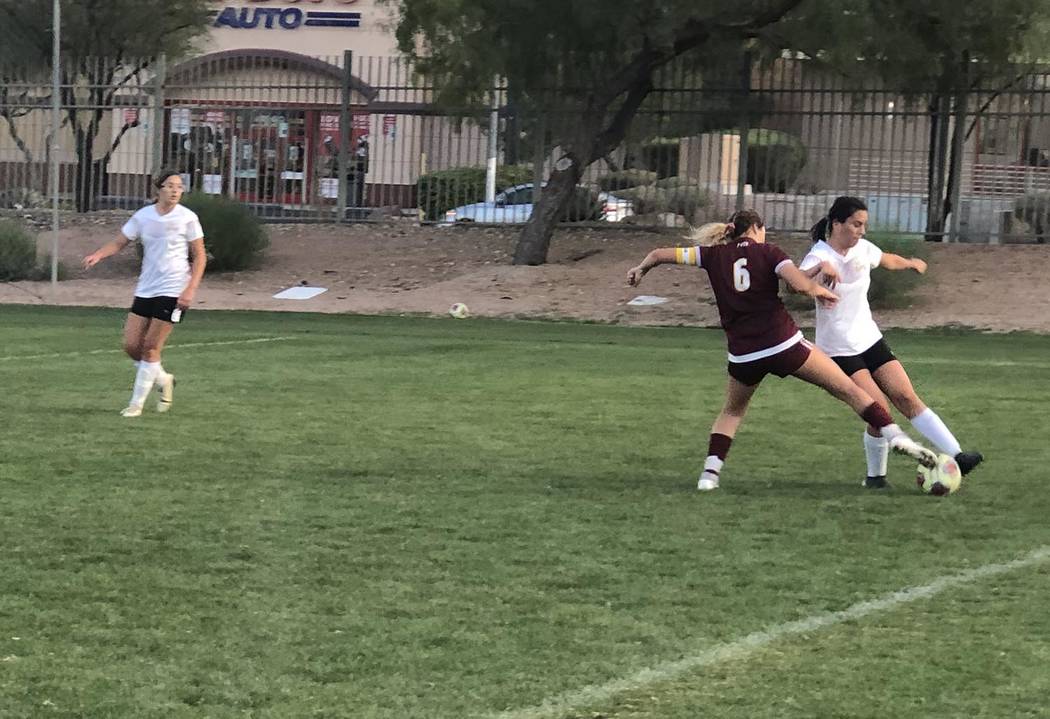 ”We were definitely the better team,” she insisted after the Trojans dropped a 2-0 decision to Virgin Valley at Bettye Wilson Soccer Complex in Las Vegas.

“They were first to the ball on a lot of the plays, I have to give them credit for that,” Carrington said of the Bulldogs. “We had a lot of good plays, but we just couldn’t get the ball in the net. They have a good keeper, that was one of their strong suits.”

Virgin Valley keeper Erin Ofori did have a strong game, but the Trojans made it easier for her, sending shot after shot directly into her hands. Many of the shots came from long distance, giving Ofori plenty of time to line up the save.

“That is the hardest thing,” Carrington said. “She had to have at least 10 saves. We couldn’t get them into the upper corners as we had planned.”

Ofori did have a couple of excellent saves, including one with around 6 minutes to go in which she batted down a direct kick with both hands and then hustled to gather in the ball. But much of the time it was simply watching the ball sail into her hands.

Virgin Valley played a solid game, but the Bulldogs didn’t dominate the way a 2-0 score might suggest. They scored very early in each half, 6 minutes into the first and barely a minute into the second, just after a spirited halftime discussion.

“I was just telling them that they are better players than this,” Carrington said. “We had the most points (54, with a record of 17-3-3) out of the whole 3A for a reason. We’re a quality team, and they’re quality girls. This just wasn’t going to be what I wanted to see out of them.”

Virgin Valley, a school with just more than 60 percent of the enrollment of Pahrump Valley, has many more girls soccer players.

“They had 37 girls on their roster, and when you can sub every five minutes, that’s crazy,” Carrington said. “I can’t compete with that.”

Another factor Carrington cited was the lack of competition in the Sunset League, which leaves the Trojans something less than match tough when tournament time comes around.

“When you play the teams we beat all year, and then you step into playing the better teams at the end of the season, it’s kind of hard,” she said. “We have to slow down all year for the mercy rule, and then pick it up at the end of the year and play the whole 80 minutes.”

But the Trojans did eventually adjust, and Carrington said they played better during the second half. And they did have chances. But more often than not, when the Bulldogs had trouble clearing a ball away from the box, the Trojans didn’t have much more success getting a foot on it.

“We couldn’t get those crosses in and have that follow-through,” Carrington said.

Carrington was pleased the Trojans didn’t give up, but they also didn’t have the sense of urgency she sought. Several times she shouted to somebody on the field to shoot — Carrington is a strong advocate for keeping pressure on the opposing keeper — and some of the ball movement she saw frustrated her.

“This is no time for crazy kicks,” she shouted during the 72nd minute. “Don’t quit!”

But not quitting wasn’t quite enough on this night, as Virgin Valley did a good job of clearing the ball and making the occasional run to take time off the clock. And although the Bulldogs never quite went into a full defensive shell, the Trojans could not muster many clean shots at Ofori.

When the whistle sounded and their chance to defend their region title and make a third consecutive trip to the state tournament gone, Carrington didn’t stop coaching, ushering her players off the field in orderly fashion.

After winning 16, 15 and 17 games the past three seasons, the players who will be Trojans next fall have high standards to uphold. But they will have the roster to do it, as Kaylee Vega is the only graduating starter. And with the defensive line most often including junior Ally Rily and three freshmen and with a freshman keeper in Madison Lee, the Trojans figure to be stingy again.

“We’ve never not come back stronger than what we did last,” Carrington said.