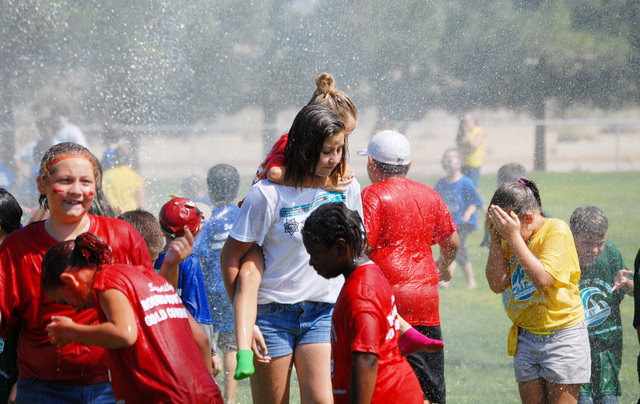 The games are back. Each year for the last 18 years GREAT Games have entertained the youth of the valley. GREAT stands for Gang Resistance Education and Training.

This year is no different, but the games did face elimination due to county budget cuts and were saved from the axe by Nye County Sheriff Sharon Wehrly. Wehrly said the program was never in danger with her as Sheriff.

“I would never cut the program because of the children,” she said. “It gives the chance for the children to interact with law enforcement in a positive way.”

This was the second time in two years that the program faced the axe due to budget problems. Two years ago Round Mountain Gold donated $10,000 to the program, which saved it from the cutting block.

During the summer months, two Nye County deputies go out and take their anti-gang message on the road, where they spread their message to over 300 kids.

Delivering the positive message to the kids are Deputies Alexandra Fernandes, the resource officer for Rosemary Clarke Middle School and Deputy Katlyn Ferrel, who handles the Pahrump Valley High School.

Fernandes said the games are important to the community.

“It gives the kids something to do in the smaller communities,” she said. “But more importantly it leaves the kids a positive feel for law enforcement.”

When the games are in town hundreds of kids play, have fun and learn alternative ways to gangs, drugs and violence.

The two take the games to Amargosa, Beatty, Gabbs, Tonopah and Round Mountain and they save Pahrump for last. It takes six weeks to go to all the towns. The officers spend a week in each community.

This week the games are in Tonopah at Joe Friel Park from 9 a.m. to 1 p.m. for the entire week. From there, the deputies will be in Amargosa from July 6 to 10. Registration for Amargosa will be on Sunday at Valley Park from 12 noon to 4 p.m.

Fernandes said they will serve everyone that shows up. They had 44 in Round Mountain, 30 in Beatty and 20 in Gabbs.

“This year our turnouts have been great and when we get to Pahrump we expect to see 200 kids this year,” Fernandes said.

Fernandes said they are accepting applications for HGO, which stands for the Honorary Great Official in Pahrump. In the past, the games have used college-age students and high school students to drive the program.