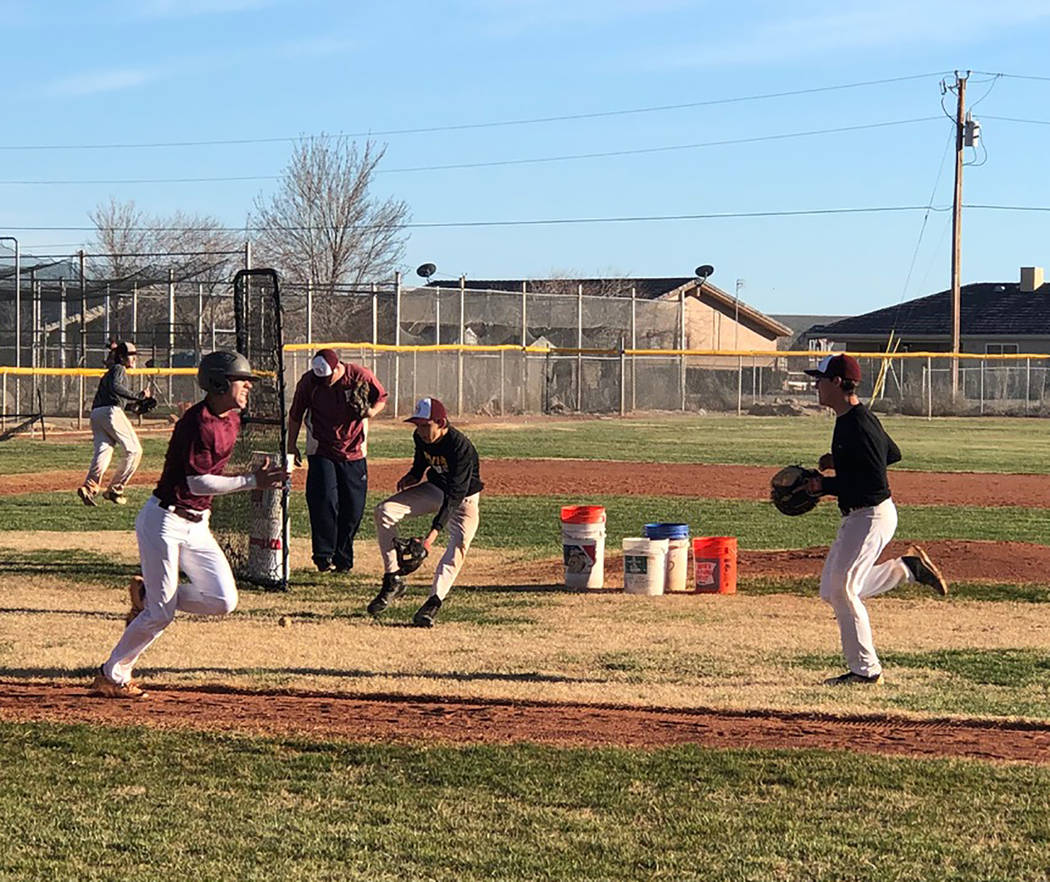 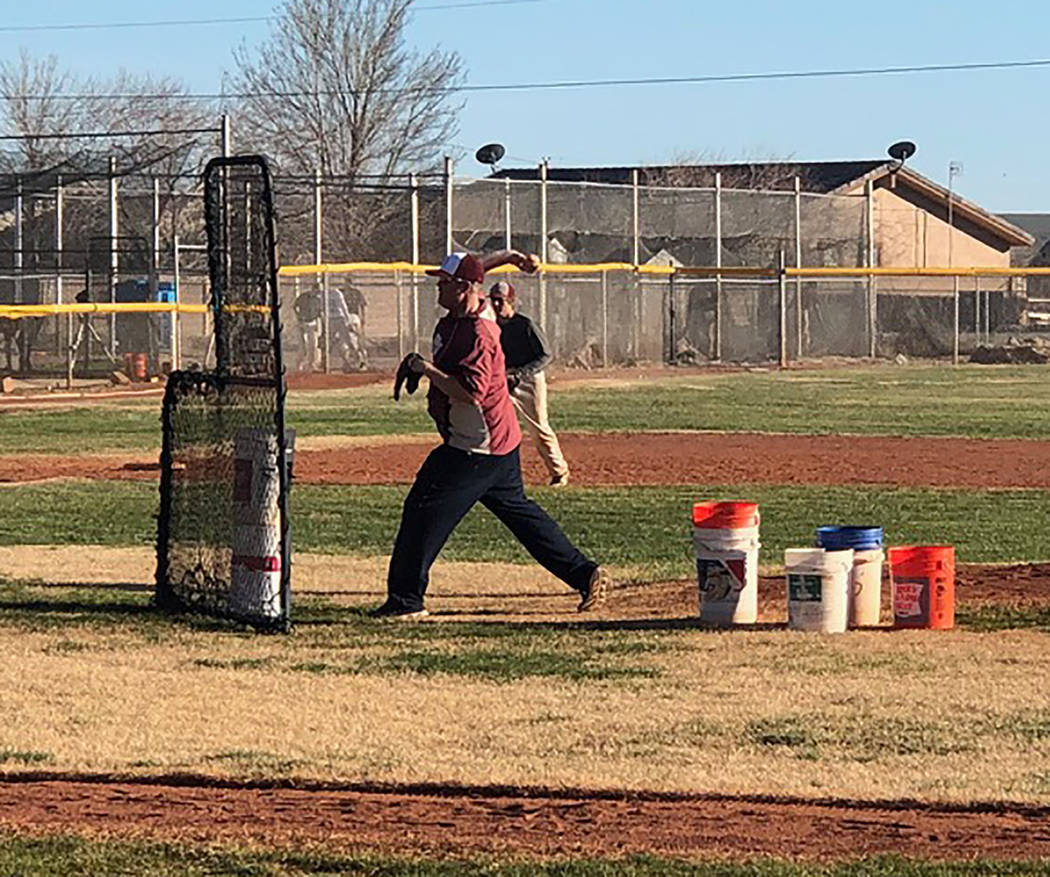 Tom Rysinski/Pahrump Valley Times Pahrump Valley High School baseball coach Brian Hayes delivers a pitch during a drill at practice Feb. 28 at the high school. Hayes is entering his seventh season as coach of the Trojans.

Brian Hayes could be forgiven for tamping down expectations for the Pahrump Valley High School baseball team. The Trojans graduated two pitchers, Garrett Lucas and Bradda Costa, who combined for 116 strikeouts in 118 innings and 12 victories last season for a team that went 20-17-1 and reached the Class 3A State Tournament for the first time in 11 years.

But even as he acknowledged the rather big holes the Trojans must fill, the seventh-year coach refused to lower expectations for the two-time defending Sunset League champions.

“Our goal is to win state,” he said after a preseason practice. “The way we’re going to get there is by focusing on the next pitch. We’re trying to get these kids to realize that’s not our focus; our focus is pitch by pitch. We saw what happened last year when we lost our focus.”

Losing focus meant having eight players miss significant time because of suspensions, which led to a stunning 3-11 start. The lowlight had to be at the Grizzly Invitational in Las Vegas, when on one day the Trojans lost via the mercy rule twice, 12-2 to Boulder City and 18-3 to host Spring Valley. They also lost four straight times in the season-opening Route 66 Tournament hosted by River Valley High School in Arizona, getting outscored 21-2 in the final two games.

“I don’t think we’ve ever had a winning record at River Valley,” Hayes said. “We always seem to finish strong, but we need to start strong.”

The 18-team tournament opened Thursday and runs through Saturday and will give the Trojans five games to get an early look at how they stack up. With six starters back and 10 letter winners returning overall, Hayes is very optimistic.

That feeling starts with pitching, because the Trojans have a lot of players who can take the mound. The biggest change is that junior Cyle Havel, who struck out 36 in 22 innings with 5 saves, will move from the closer role into the rotation.

“We were going to have him begin as a closer,” Hayes said. “But he wants to start, and we feel like he’s earned the right to start.”

Then there are sophomores Jalen Denton (2-1, 3.23 ERA in 26 innings) and Jake Riding, who has been throwing well during the preseason, Hayes said.

“Denton pitched in three of the most important games: the Western game, which we had to win to clinch; he pitched the Boulder City game, six solid innings; and he pitched the state game that we lost, when he gave up four runs in the first inning and then just two the rest of the way,” Hayes said. “He’s got some big innings in him, and Havel is used to the pressure because he was our closer all year, so it’s a matter of how he’s going to transition into a starter role.

“We like where we’re at, but they have to prove they can go out there and throw.”

As for relievers, Hayes will have plenty of arms from which to choose.

“Joey Koenig can help us in middle relief and long relief, probably even get a couple of starts for us,” Hayes began. “Dylan Grossell is probably the returning guy who had the most innings for us. (He is, with 29 2/3.) We’ll probably have him be a long reliever. Chase McDaniels has been throwing for us. And we have a real good group of freshmen, Roman Roberts and Zach Cuellar, another lefty, and Henry Amaya can throw pretty well. Ryan Braithwhite, a sophomore, we’re probably going to turn him into a reliever. He doesn’t throw hard, but he can mix up his pitches pretty well.”

If all, or even most, of them perform well, the Trojans will be fine, but Hayes knows there is some pressure on them.

“We have some depth, but some of these kids don’t realize the innings that we lost,” Hayes said. “Garrett’s been a workhorse for three years, and Bradda’s been a guy who was always eating up innings for us. So the top two arms are gone.”

The lineup is largely set, although Hayes said a couple of jobs were not settled with a week to go before the opener.

“We’re pretty solid,” he said. “We’ve got a couple of positions we’ll find out about the next couple of weeks, but we’ll have 13, 14 on varsity and 16, 17 on JV. We still have a battle in the outfield somewhere, and we’re trying to find guys who can fill when somebody pitches. We’re playing five games this week, so we’ll see how it plays out. They have opportunities to solidify their roles.”

The offense starts with Class 3A all-state catcher Willie Lucas. Lucas, who will join his brother on the Big Bend Community College baseball team next year, led the team with a .381 batting average and 14 doubles.

“I think it will be a fun season,” Hayes said. “We’re excited to get out there.”