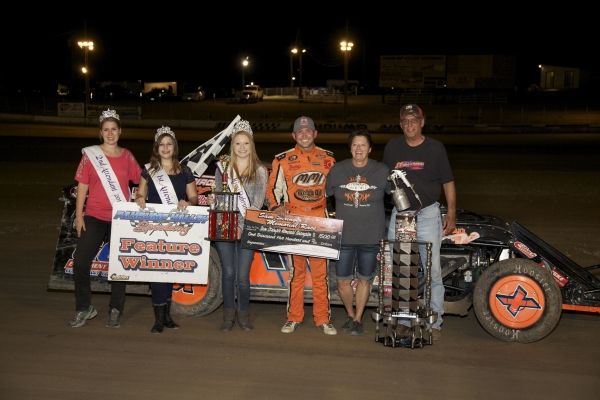 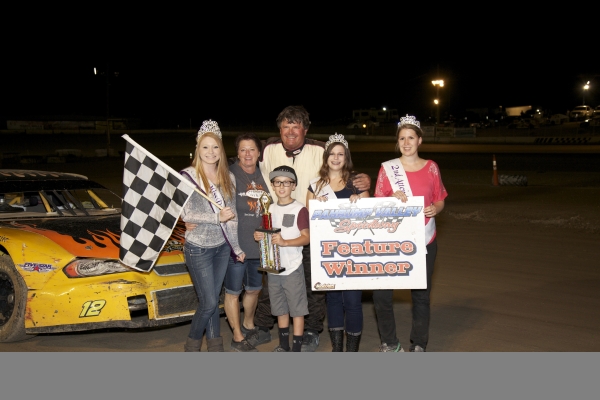 Kyle Heckman scored his second Sam Stringer Memorial Race win in a row, for Bill Henderson racing, taking the $1,500 prize money in front of a huge crowd on Saturday night.

The 48-lap main event had 19 racers showing up to one of the biggest races of the year at the speedway.

Race organizer Sheree Stringer was pleased with the crowds and how the fourth memorial tribute for her late husband was run.

“In the very beginning, I was worried about the rain chasing away the crowd, but they slowly came and filled the stands and I think over 500 people were there,” Stringer said. “Bryan Wulfenstein organized the race schedule and just stuck to it and did a great job, so the race ran smoothly.”

Racers challenging defending champion Heckman had a tough go of it. Of the 19 racers to start only five finished.

Finishing in second place was Levi Kiefer and third was Jon Jensen.

Contributing to many of the wrecks was the speed of the track. It was slick and fast because of rain that fell earlier in the day. Also, the main event was the last race and by the end of the night the constant racing carved deep ruts in the track, which caused some flat tires during the race.

In the first 10 minutes of the race, there were at least three or four caution flags taking out several drivers before the first 10 laps were in. This would continue for 30 minutes until there were only five drivers left in the race for the last six to seven laps.

The race was all Heckman, who won the pole position during the heat races and never relinquished the lead. Levi Kiefer, who races on the same team as Heckman, was also in second place the entire race.

Steve Stringer finished the race in seventh place and was disappointed.

“I spun myself out near the end of the race and couldnât get my car started again,” Steve Stringer said.

He said the race took a lot more than expected out of him this year.

“I felt the race this year,” he said. “Emotions got to me and I was mentally exhausted afterwards. I talked to my dad in the car and told him to watch over me. Donât worry, he didn’t say anything back.”

Local drivers like Dan Fitzgerald, Bryan Wulfenstein and Dan Snowden to name a few, all came out to challenge the two drivers who have won the race for the past three years.

Even Jason Pike, who has won over 100 races at the speedway came out after a long hiatus.

Pike made his first appearance of the season and said he did it for Sheree and Sam.

“Sheree approached me during the Fourth of July race and told me to put aside all my frustrations and just come out to race for Sam,” Pike said.

Pike was one of the bigger Pahrump names in the race but really wasnât a big factor in the race. He finished in sixth place.

“My engine had no horsepower and the cylinders were filling up with fuel causing the engine to shut off,” he said.

“I saw as he was just making the turn earlier in the race that other drivers were almost running him over because his car stopped, so I put the caution flag out, but he was able to restart the car,” he said. “But this put him at the end of the field.”

Pike was disappointed with his carâs performance and said that Heckman is beatable.

“Both Heckman and Kiefer brought their A-game and I didn’t,” Pike said. “These guys are serious racers and I think I needed to put more prep time with my engine prior to the race, which I didn’t do. I felt robbed by my car, but the racing was good, so good that I might go and race Heckman in Bakersfield.”

The top Pahrump racer said his strategy was basically to stay safe in the first 10 laps.

“I knew the wrecks were coming and I knew I had to survive that first 10 laps,” he said. “Racing is my passion and I miss it. I thought my strategy was paying off, but I didnât have enough horsepower and I really should have called it quits after the heat race because my engine was having problems.”