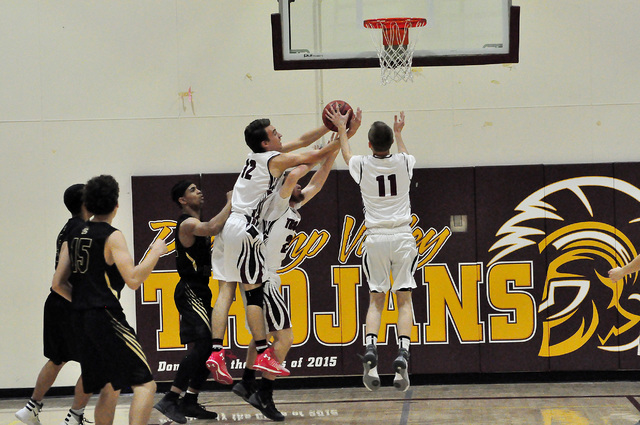 Trojans Boys basketball vs. Spring Valley last year. The boys have not won a league game since Jan. 21, 2014, but this could be the year if they get more guys to come out for the team. Horace Langford Jr. / Pahrump Valley Times

November kind of creeped up on me and I really didn’t feel that the fall sports season was coming to an end. Did you know it’s time for basketball season?

What got me to thinking about it was the Christmas displays I saw in Walmart. That woke me up. Geez, Walmart, really? That and the fact that the NBA scores started creeping onto my computer at home.

Basketball season has a little bit of an edge to it this season because the girls team has a new coach in Bob Hopkins. Hopkins has had open gym and has been excited about his new team. And he should be, for he has a lot of great athletes coming out. The girls at Pahrump Valley High take their sports seriously and at times I think they have more school spirit than the boys.

Let’s use basketball as an example. I asked Jill Harris after the girls had won their home playoff game against Chaparral, how many of her girls were playing basketball?

Of course, I had to check to see if it was true, and so I checked last year’s roster. Sure enough, practically all of the girls on the volleyball team played on the basketball team.

The boys have a problem. Football players and soccer players are not playing basketball. The team only had nine players last year. That team needs big guys, but it’s not happening. The boys I guess are afraid of losing, but you can’t win if you never even try.

Craig Rieger has a 100 guys trying out for 14 varsity and 14 junior varsity wrestling spots. If you don’t make the wrestling cut, join the basketball team.

Most of the girls are playing three sports. There are fewer and fewer of the boys that are sucking it up and this can’t happen if the school is to be competitive.

For the boys, the sport is popular at the junior high level but not at the high school. This makes it harder for Trojans coach John Toomer to win, which he could if he had some talent.

High school isn’t like the NFL where you get a top draft pick for finishing in last place. If you finish in last place, you have to dig for the talent and the boys have got to come out and work harder for next year.

The team will have an experienced point guard in Bryce Odegard and I know Odegard doesn’t want to lose. Odegard helped Trojans coach Matt Kolodzieczyk build the cross-country team and now they have sent two teams to state in the past two years. Of course, Odegard was the first male at Pahrump Valley to win the cross-country individual state title. Will he have to build the boys basketball team too?

No doubt he is trying, for that’s the kind of kid he is. Let’s give him a hand and if you are over six feet tall and can shoot a basketball, play ball for Pahrump. Play the game for the Trojans instead of playing it on a video game at home.