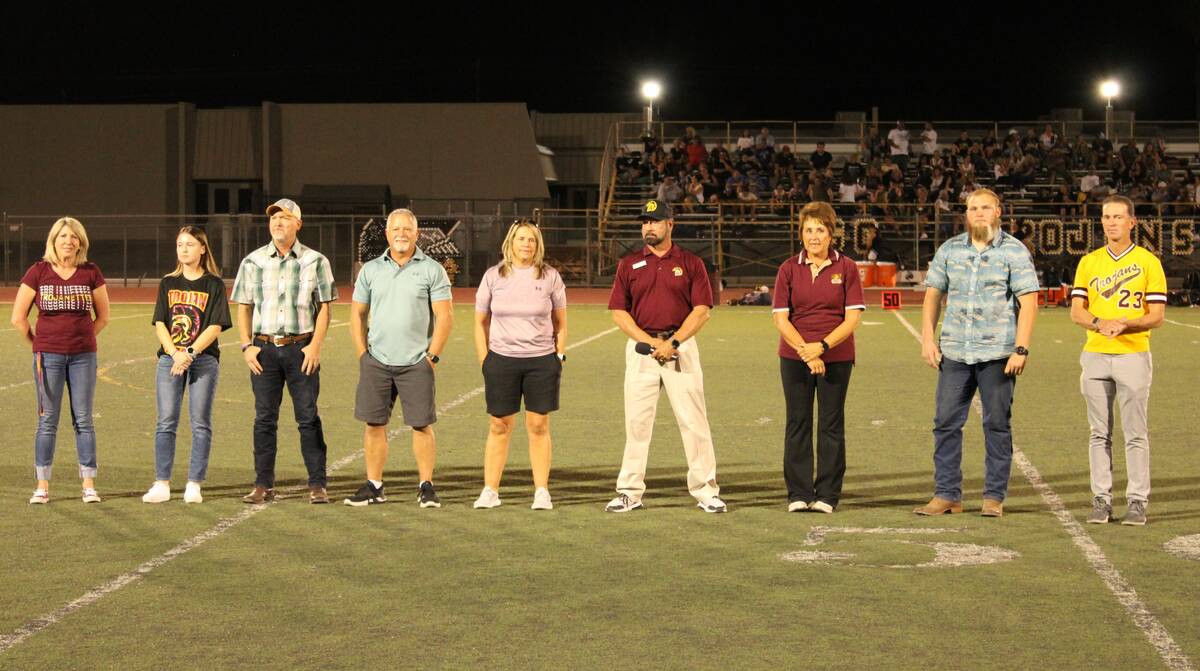 Pahrump Valley High School announced its Sports Hall of Fame Class of 2022 inductees on Friday, Sept. 23, during halftime of the Trojans’ football game against Boulder City.

Twelve members were part of the hall of fame class.

Andy Anderson: Andy coached wrestling at PVHS from 1980 until 1995. Anderson was a three-sport coach, being a part of the wrestling, football and baseball programs. Anderson won in wrestling at Virgin Valley during the 1987 season where 60 teams participated.

Jace Clayton: Clayton was a football player and a wrestler at PVHS from 2011-15. He was an all-conference offensive and defensive lineman in his junior and senior years. Clayton received all-state defensive lineman honors for his work during his senior season. In addition to his standout play on the field, Clayton was a three-time regional champion, a two-time state runner-up and he was a member of the 2015 state champion wrestling team.

Cindy Colucci: Colucci was part of the 1979 PVHS graduating class. She was inducted into the hall of fame for her volunteer work with the athletics department. Colucci has been the president of the school’s booster club since 2005. She has raised three children who were multi-sport athletes at PVHS.

Mike Colucci Sr.: Colucci was inducted into the hall of fame for his volunteer work as well. Many may recognize Colucci as the voice of the Trojans at their sporting events. He announces football, basketball and occasionally wrestling. Colucci helps with the “Kick for Cash” and “Shoot for Cash” fundraisers at the football and basketball games.

Kris Matuszewski Foster: Foster was the first athletic trainer at Pahrump Valley. She first started working at the school in 1997, before moving to Tennessee in 2004 where she is still involved with coaching at Claiborne High School. Foster taught physical education, athletic training classes and helped coach the girls basketball team for three seasons.

Steve Foster: Steve was a three-sport standout athlete at Pahrump Valley High School from 1984-87. He was an all-state first team quarterback during his senior year. Foster holds the passing records for a single season, as well as for a career, in football. Foster was also a two-time state champion in wrestling during the 1985-86 and 1986-87 seasons and he was named to the all-league team as a first baseman in baseball during his senior year. Foster received the Army Reserve National Scholar-Athlete and the Ray Wulfenstein Best Male Athlete awards in his senior year.

Stoney Foster: Foster was a three-sport athlete at PVHS from 1986-90. He was the team captain of the football team for two years and he played quarterback for the Trojans. Foster was a four-year letterman on the basketball team and was named to the all-league first team during his senior year in which he won the Senior Athlete of the Year award in 1990.

Craig Rieger: Rieger has been a coach at Pahrump Valley since 1994. He has had huge success since taking over the wrestling team. Rieger’s teams have been league champions nine times, regional champions six times, and state champions twice. Rieger has also been a part of the football coaching staff since the 2001 season and he’s a member of the track & field coaching staff.

Terri Wulfenstein: Wulfenstein began coaching the flag team at PVHS in 1984. Following that, she began coaching cheerleading and the dance team. She has helped bring many trophies to the school, including a 2006 state championship and a 2007 runner-up. Wulfenstein has also led her team to a medal at the national competition. Her teams have been invited to participate in the Disney parade each of the last 12 years.