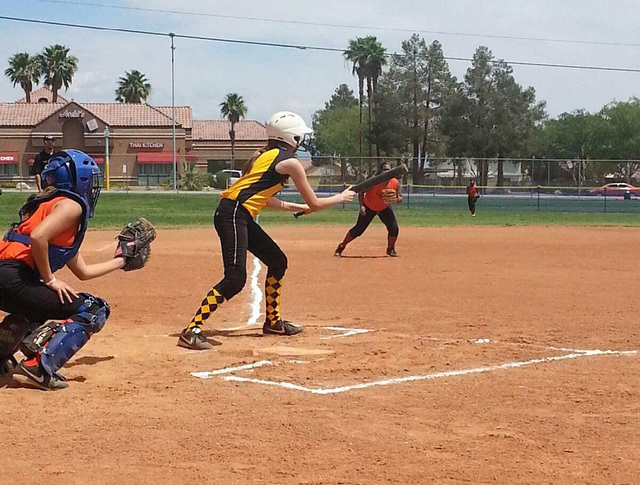 So you want to be a softball player in college and want to improve your game, but don’t know how to get over that plateau?

In this Pahrump camp, the girls will be able to learn from the best in softball.

The Pahrump Youth Softball Association is hosting a softball camp put on by U.S. Fast Pitch Camps here in Pahrump, which gives the girls interested in playing softball in high school and beyond an opportunity at seeing and learning the game at a higher level. Sometimes all a kid needs is that little bit of information that sends her game into a whole new zone. This camp is open to ages 8-15 and starts on June 17-19. The cost is $125 per player.

Trojans Coach Eli Armendariz believes camps like this are a great opportunity to improve your skills.

“It is also an opportunity when you have coaches or players coming from universities. It gives players an opportunity to be discovered as potential talent. If you got a kid who can play Division I, II, III or NAIA ball, these players might spread the word about your player,” he said.

Holly Wright is one of the organizers for PYSA and she said she heard about the camp through friends who had gone to it in Elko. This group has been in Elko for the past five years. She also feels it’s economically feasible.

“It is an excellent deal because we take our daughter every year to Arizona for a camp and it costs $450. This camp goes to Elko, Nevada every year and this is their fifth year in Elko. I figured if Elko could do it we can do it,” Wright explained.

The director of U.S. Fastpitch is Hailee Nanchy, a former University of Minnesota player. She firmly believes her camp can improve players.

“It’s an opportunity to help an athlete take their game to the next level, whether you just need the basic fundamental building blocks or you need to be taught the next level part of the game. There is something for everybody at the camp. We serve such a wide range of athletes. We have coaches that have experienced a high level of softball themselves and they can teach anything you need to know and we have coaches that are there for the girls that can teach the basic fundamentals that are working on just hitting, throwing and fielding techniques,” Nanchy said.

Coming to the camp already is Hailee Steel, who plays third base for Arizona State University. Depending on how many girls, the camp could have more. Nanchy said the third person she would bring in is a pitcher.

“It would be someone who just came out of the world series. Some of the girls are playing pro ball this summer and with the USA team. I try to keep people who are playing the game at a higher level on staff,” Nanchy said.