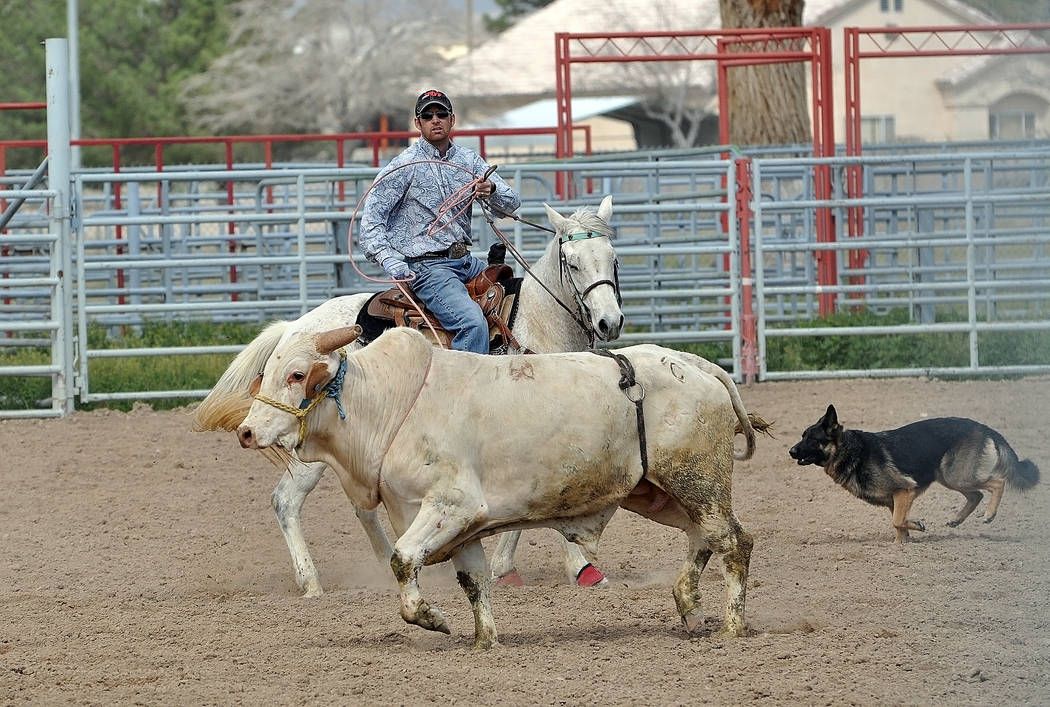 Robert Tibbits chases down a bull for the team with help from Bella, the bull chasing dog on March 5. Bull riders have returned to Pahrump in the form of high school rodeo, which will do its first rodeo next season.Horace Langford Jr. / Pahrump Valley Times 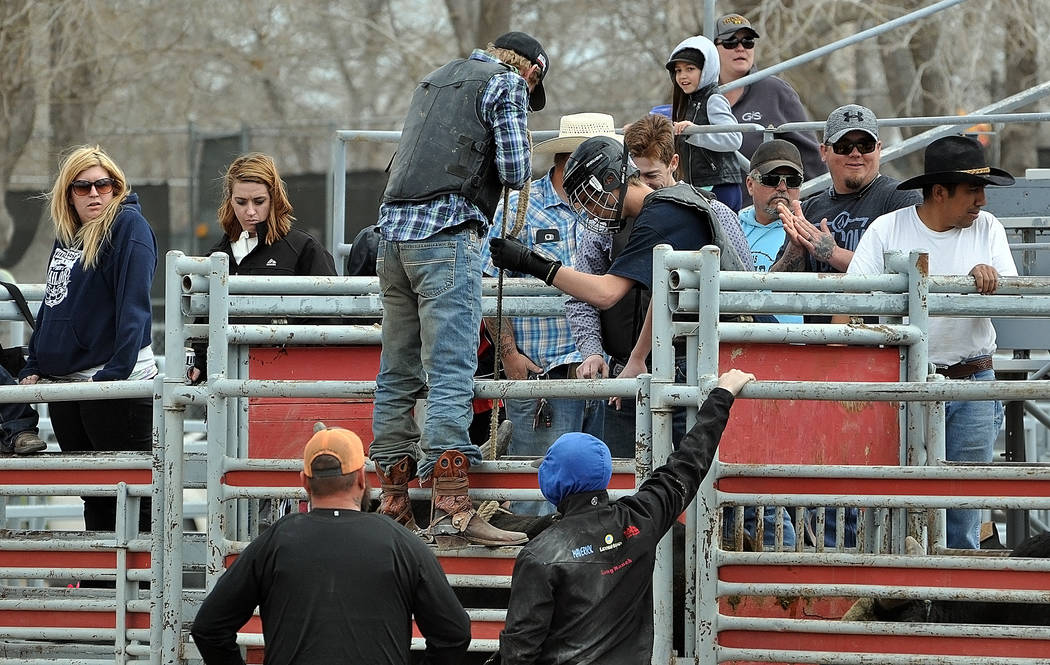 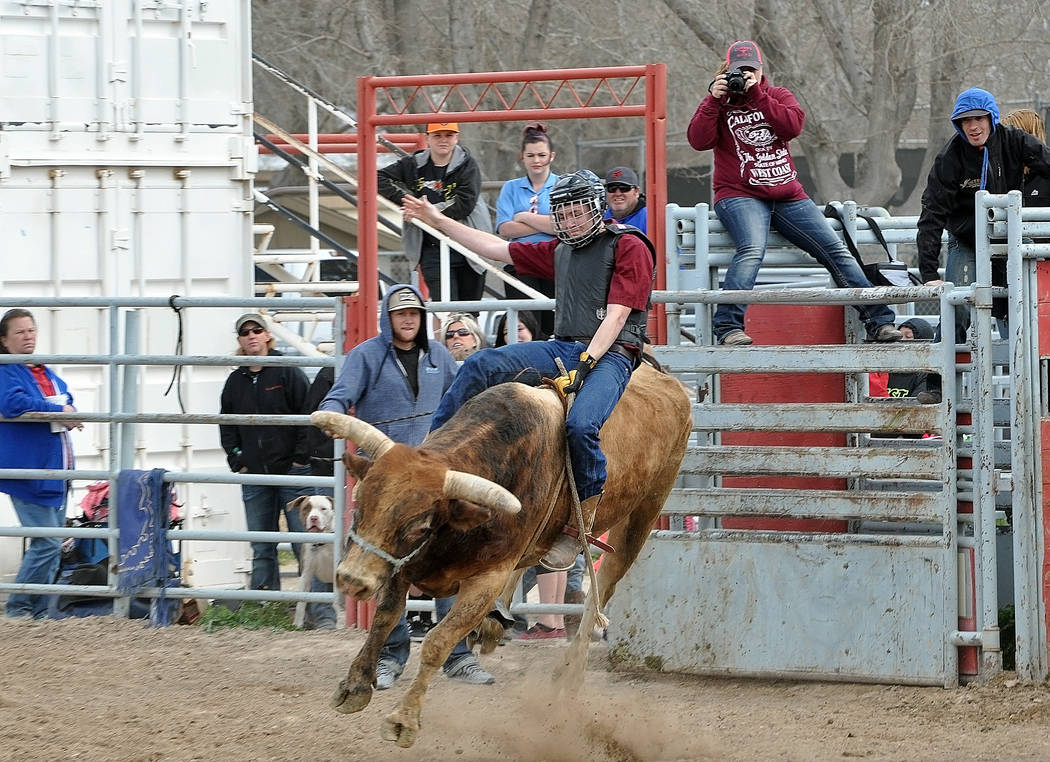 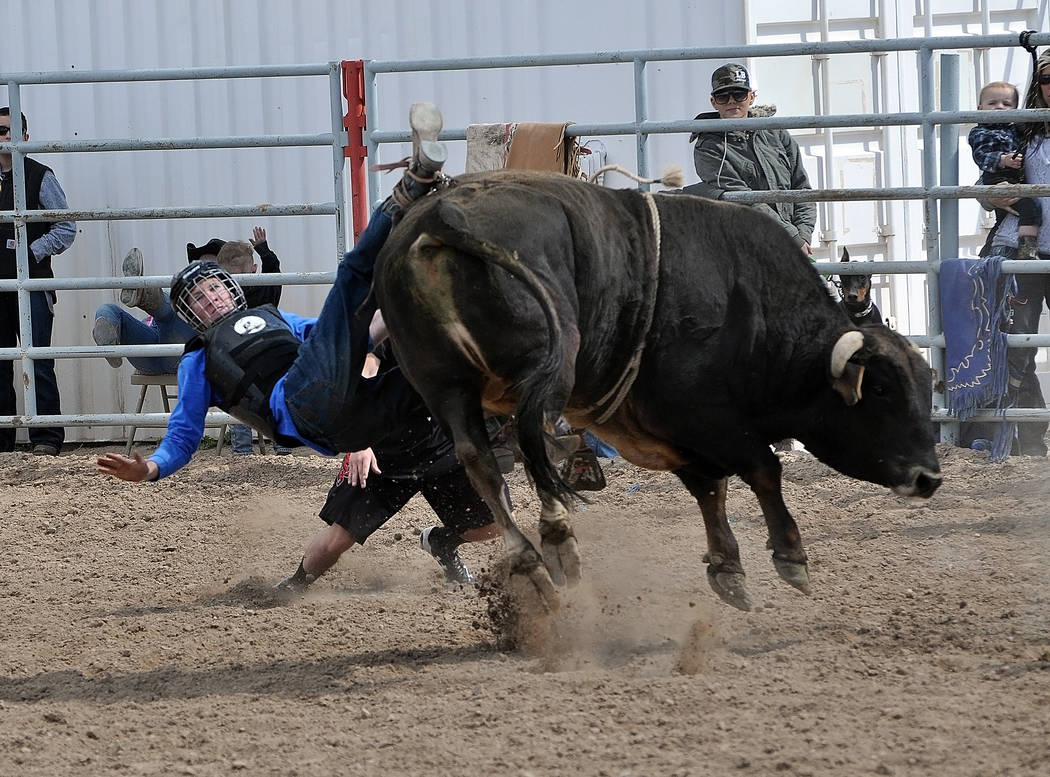 Horace Langford Jr. / Pahrump Valley Times High school bull rider Kyle Marty gets bucked off his bull on March 5. The Pahrump High school rodeo team is back in action and if you want to see some bull riding, the team practices at the McCulloch Rodeo Arena on Sunday usually around 12 p.m.

According to Pahrump High School rodeo director Buddy Krebs, his bull riding team is the largest in the high school rodeo circuit at six riders.

All six of them have been practicing since December and all six are new to riding bulls, but are learning fast.

For junior Kyle Marty, this opportunity is a dream come true.

“I have been wanting to do this since I was 8 years old,” Marty said. “My first time was nerve-wracking and an adrenaline rush. I didn’t know what was going on.”

He said his first ride was three or four seconds long and then he got bucked off.

“I landed on my back, but the ground was soft,” he said. “It was what I expected and then some. I enjoy the rush it gives me. It’s one of the best feelings.”

Marty is 6-foot-1-inch tall rider who did football, wrestling and baseball during his freshman year.

Marty said he is the first of his family to take on the bulls and he did it for his mother, who passed away in 2012.

“My mother was a big rodeo fan,” he said. “I started riding because I had made her a promise that I would.”

Marty said when he rides he is nervous but not afraid.

“I know the consequences,” he said. “When you ride bulls, it’s not if you get hurt, it’s when you get hurt. Bull riding is one of those things where you need a lot of heart.”

Another first-time bull rider is Aidan Medici. He too just rode a bull for the first time in December.

“It was nerve-wracking to have a 2,000-pound animal around you and you don’t know if you are going to get stepped on,” Medici said. “I enjoyed it and it was the most fun I have ever had.”

Like Marty, Medici is in good shape, also having wrestled for the Trojans.

“When I heard about the opportunity, I jumped at the chance,” he said.

Medici said bull riding has been part of his family for a while. He has a grandfather and two cousins that rode bulls.

“My grandfather has given me tips on how to ride,” he said. “He lives in town. I was able to stay on for eight seconds one time. My first time doing that was on March 5th. I think as a team we will all have that eight seconds under our belt soon.”

Medici will use the offseason to get better and hopes to go to a bull riding camp in Colorado.

Krebs seems to think his team will all have their eight seconds soon. In bull riding the the rider must stay atop the bucking bull for eight seconds to count as a qualified ride.

“Practice makes perfect and all the kids are getting better,” Krebs said. “We have two kids that just recently did eight seconds on the bull. The other four kids are close and spending a lot of time practicing.”

Krebs said the live bull riding will continue during the offseason.

“Dustin Tibbits is providing the bulls and we have been doing live bulls every Sunday,” Krebs said. “If anything, these guys should be better when the season starts because these bulls are a higher quality than what high school rodeo gets. These are not easy bulls to be learning on.”

Krebs said every Sunday Pahrump residents are being entertained for free and the crowds are there.

“It’s like a free bull riding rodeo,” he said. “You should come down here and see the crowds. We are hoping to do a belt buckle series later on in the year. That will be a benefit for the team.”

Krebs said another benefit for the team will be done on April 8.